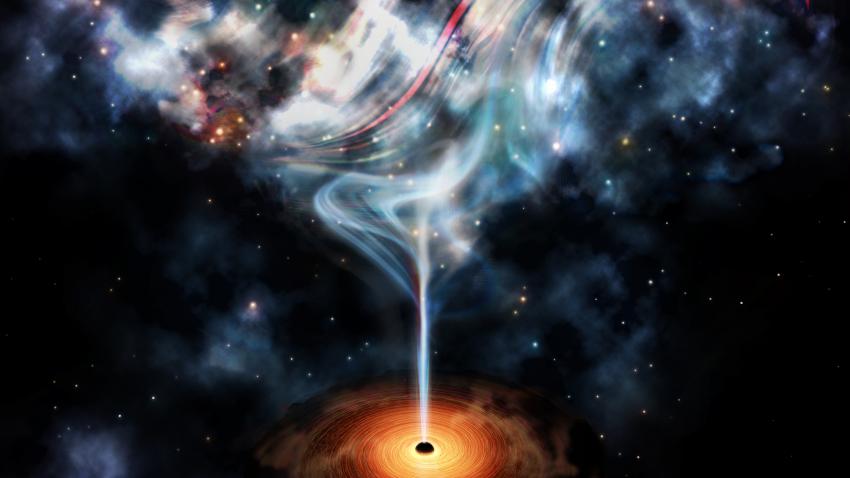 An artist’s impression of the jet launched by a supermassive black hole, which inflates lobes of very hot gas that are distorted by the cluster weather.
Credit
Institute of Astronomy, University of Cambridge
Licence type
Attribution (CC BY 4.0)

“Weather” in clusters of galaxies may explain a longstanding puzzle, according to a team of researchers at the University of Cambridge. The scientists used sophisticated simulations to show how powerful jets from supermassive black holes are disrupted by the motion of hot gas and galaxies, preventing gas from cooling, which could otherwise form stars. The team publish their work in the journal Monthly Notices of the Royal Astronomical Society.

Typical clusters of galaxies have several thousand member galaxies, which can be very different to our own Milky Way and vary in size and shape. These systems are embedded in very hot gas known as the intracluster medium (ICM), all of which live in an unseen halo of so-called ‘dark matter’.

A large number of galaxies have supermassive black holes in their centres, and these often have high speed jets of material stretching over thousands of light years that can inflate very hot lobes in the ICM.

The researchers, based at the Kavli Institute for Cosmology and the Institute of Astronomy, performed state-of-the-art simulations looking at the jet lobes in fine detail and the X-rays emitted as a result. The model captures the birth and cosmological evolution of the galaxy cluster, and allowed the scientists to investigate with unprecedented realism how the jets and lobes they inflate interact with a dynamic ICM.

They found that the mock X-ray observations of the simulated cluster revealed the so-called “X-ray cavities” and “X-ray bright rims” generated by supermassive black hole-driven jets, which itself is distorted by motions in the cluster, remarkably resemble those found in observations of real galaxy clusters. 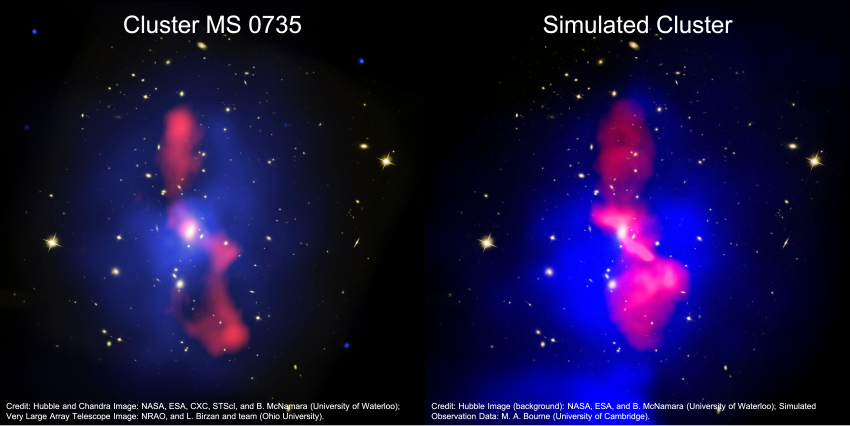 The left hand panel shows an actual observation of the galaxy cluster MS 0735.6+7421, while on the right the background Hubble image has instead been overlaid with a mock observation of the jet (pink) and X-ray emission (blue) made from the simulation. Both images show cavities excavated by the lobe inflation surround by X-ray bright rims of dense gas (blue), which are filled by distorted jet material (pink).
Credit
Hubble and Chandra Image: NASA, ESA, CXC, STScI, and B. McNamara (University of Waterloo); Very Large Array Telescope Image: NRAO, and L. Birzan and team (Ohio University); Simulated Data: M. A. Bourne (University of Cambridge)
Licence type
Attribution (CC BY 4.0)

Dr Martin Bourne of the Institute of Astronomy in Cambridge led the team. He commented: “We have developed new computational techniques, which harness the latest high-performance computing technology, to model for the first time the jet lobes with more than a million elements in fully realistic clusters. This allows us to place the physical processes that drive the liberation of the jet energy under the microscope.”

As galaxies move around in the cluster, the simulation shows they create a kind of ‘weather’, moving, deforming and destroying the hot lobes of gas found at the end of the black hole jets. The jet lobes are enormously powerful and if disrupted, deliver vast amounts of energy to the ICM.

The Cambridge team believe that this cluster weather disruption mechanism may solve an enduring problem: understanding why ICM gas does not cool and form stars in the cluster centre. This so-called “cooling flow” puzzle has plagued astrophysicists for more than 25 years.

The simulations performed provide a tantalising new solution that could solve this problem. Dr Bourne commented: “The combination of the huge energies pumped into the jet lobes by the supermassive black hole and the ability of cluster weather to disrupt the lobes and redistribute this energy to the ICM provides a simple and yet elegant mechanism to solve the cooling flow problem.”

A series of next generation X-ray space telescopes will launch into orbit over the next decade. These advanced instruments should help settle the debate – and if intergalactic weather really does stop the birth of stars.

The simulations have been performed on the STFC DiRAC HPC facilities which are part of the national e-Infrastructure. The research was funded by European Research Council, STFC and the Kavli Foundation.