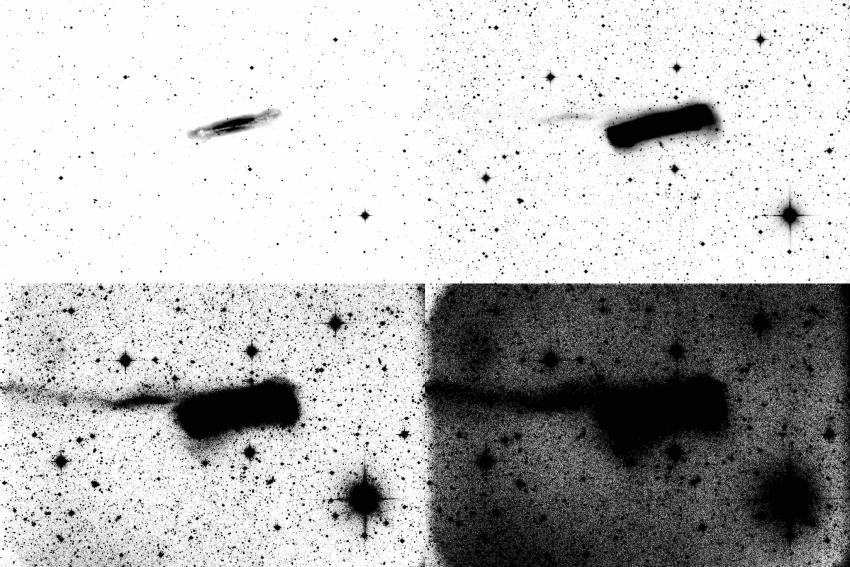 The nearby edge-on spiral galaxy NGC 3628 is 35 million light-years distant; the tail of material has an extent far exceeding the full diameter of the Milky Way. This illustration and the two following it have four panels that progress clockwise in illustrating fainter galaxy features. While the tail has been known for decades, the faintest parts of the disk reveal stars expelled roughly 100,000 light years from the collision that likely produced the tail, resulting in the odd "dog-bone" like structure. If it were visible to the eye, this galaxy's full extent would be greater than that of the full moon. The Galaxy and tail system is several times the size of our Milky Way.
Credit
R. Michael Rich, UCLA
Licence type
Attribution (CC BY 4.0)

Astronomers have completed the largest survey to date of the faint outskirts of nearby galaxies, successfully testing a low-cost system for exploring these local stellar systems. R. Michael Rich of the University of California, Los Angeles led an international team carrying out a survey for the Haloes and Environments of Nearby Galaxies (HERON) collaboration, published in a paper in Monthly Notices of the Royal Astronomical Society. The team find that the diameters of the galactic outskirts – the haloes - appear to correlate with the brightness and type of galaxy.

The outer regions of galaxies contain ancient stars ejected in collisions with other galaxies, as well as stars that were among the first to form in the galaxy’s history. Understanding these regions helps trace the invisible dark matter structures enmeshed with the visible stars and gas that make up the most obvious component of a galaxy.

For the survey the team used a dedicated relatively small 28-inch (0.7-m) telescope based near Frazier Park, California; 119 galaxies were observed in the study, a larger data set than any previous survey of this type. Images were acquired using a CCD chip (similar to that found in digital cameras), with each pixel on the chip covering a larger area of sky than a similar system in larger telescopes. The result was that in a 1-hour exposure, the telescope reveals the faint shells and plumes ejected in galaxy collisions as clearly as a comparable length exposure on the 3.6-m Canada France Hawaii Telescope, or a total exposure time of 21 hours using a conventional amateur telescope. The total cost of the telescope system is economical too: roughly US$150,000 (£121,000) or less than 10% of the cost of similar competing projects.

“We were surprised at how powerful a telescope of such modest size could be”, said Rich. “There will be many interesting fish to catch in this particular bay of the cosmic ocean, offering a potential lifetime of studies with very large telescopes”, he added.

Noah Brosch, an astronomer at Tel Aviv University and a member of the team, is leading two additional studies of galaxy discs and galaxy groups, using an identical 28-inch telescope that is part of the HERON collaboration, at the Wise Observatory of Tel Aviv University, near Mitzpe Ramon, Israel. Brosch says: “The low surface brightness Universe hides many surprises amongst galaxies, small groups of galaxies, and giant clusters; we expect our two telescopes to make many discoveries.”

Code developed by Aleksandr Mosenkov of the Russian Academy of Sciences allowed the team to precisely measure the extent of the galaxies. The team found that diameter of a galaxy's halo is correlated with a galaxy's brightness; those galaxies brighter than the Milky Way (the galaxy we live in) show the largest haloes, some exceeding 600,000 light-years across - significantly larger than the Milky Way and its satellites. The largest haloes are found in the round, red galaxies known as giant elliptical galaxies (a good example is Messier 87, located in the Virgo cluster) that weigh as much as 1 million million Suns, but giant haloes can also be found in galaxies like the Milky Way that have a disc.

These very faint, distant stars may trace the extent of dark matter associated with these galaxies, a possibility that the team plans to explore in the future. The team had sought a connection between evidence of a galaxy collision and the amount of star formation observed in a galaxy, but none is seen: old, red and dead galaxies are as likely to have visible collisions as a disc galaxy with a youthful burst of star formation; instead, collisions are mostly found to have occurred in any galaxy more luminous than the Milky Way. “Previously a study like this would examine a handful of galaxies; a sample of this size is unprecedented”, said Mosenkov. 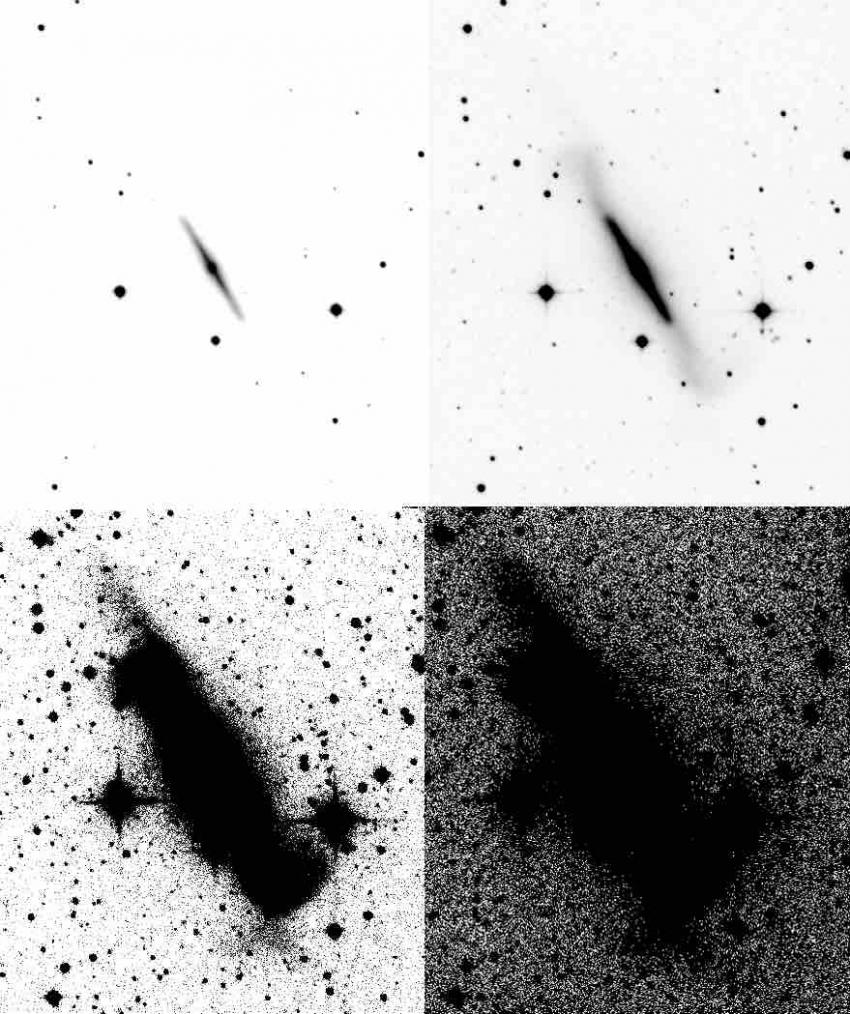 Image of the disc galaxy NGC 4762, a member of the Virgo cluster of galaxies, roughly 60 million light-years distant. Visible in amateur telescopes as a very thin disc, successively deeper exposures reveal a distortion or "warp" in the disc. The deepest exposures transform the galaxy into a whimsical "shoe" defined by the debris, a collision likely to have occurred within the last billion years.
Credit
R. Michael Rich, UCLA
Licence type
Attribution (CC BY 4.0)

The trove of images is published in the paper, and shows previously unknown faint extensions and faint companion galaxies. Among the surprises is a dwarf galaxy of diameter 50,000 light years, orbiting the spiral galaxy NGC 7331. NGC 4762, a red disc galaxy in the Virgo cluster of galaxies is viewed edge-on, and has faint projections that completely change at low surface brightness levels, appearing like a shoe. NGC 3628 appears at first to look like the Milky Way on edge, but the survey images show its flat disc to be a small part of a system looking like a dog bone connected to a long streamer. The observations suggest that collisions of galaxies are ubiquitous, and can eject stars hundreds of thousands of light years from their galaxy of origin.

The team will place all of its science images into the NASA/IPAC Infrared Science Community Archive, including new observations of additional galaxies not discussed in the paper. In total, it is expected that data for over 150 galaxies will become available to anyone in the world.

The 0.7m telescope used by Rich was designed by James Riffle of Aguila, Arizona for the Astro Works corporation, but it is no longer in production.  The system is novel in that the camera is placed at the “prime” focus, in front of the primary mirror.

The new work appears in: “The haloes and environments of nearby galaxies (HERON) – I. Imaging, sample characteristics, and envelope diameters”, R. Michael Rich, A. Mosenkov, et al., Monthly Notices of the Royal Astronomical Society 490 (2019) (DOI: 10.1093/mnras/stz2106).

Science images from the survey will be placed in the NASA/IPAC Infrared Science Community Archive, and will be live from 1 November 2019 at: https://irsa.ipac.caltech.edu/data/HERON/overview.html

The Royal Astronomical Society (RAS, www.ras.ac.uk), founded in 1820, encourages and promotes the study of astronomy, solar-system science, geophysics and closely related branches of science. The RAS organises scientific meetings, publishes international research and review journals, recognises outstanding achievements by the award of medals and prizes, maintains an extensive library, supports education through grants and outreach activities and represents UK astronomy nationally and internationally. Its more than 4,400 members (Fellows), a third based overseas, include scientific researchers in universities, observatories and laboratories as well as historians of astronomy and others.