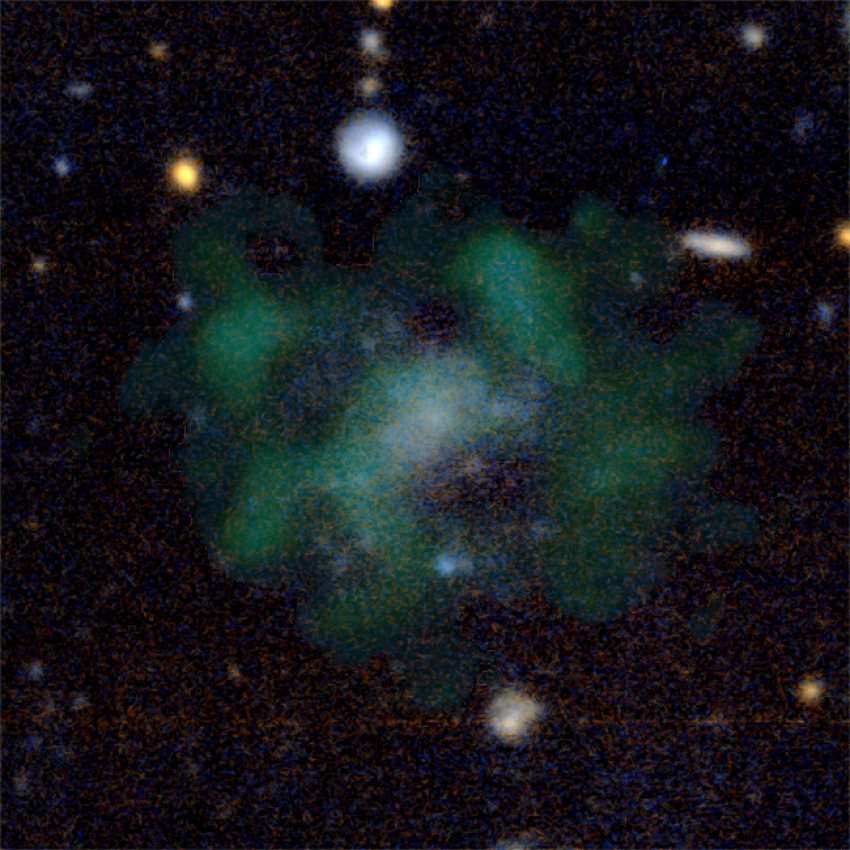 The galaxy AGC 114905. The stellar emission of the galaxy is shown in blue. The green clouds show the neutral hydrogen gas. The galaxy does not appear to contain any dark matter, even after 40 hours of detailed measurements with state-of-the-art telescopes.
Credit
Javier Román & Pavel Mancera Piña
Licence type
Attribution (CC BY 4.0)

An international team of astronomers led by researchers from the Netherlands has found no trace of dark matter in the galaxy AGC 114905, despite taking detailed measurements over a course of fourty hours with state-of-the-art telescopes. They will present their findings in Monthly Notices of the Royal Astronomical Society.

When Pavel Mancera Piña (University of Groningen and ASTRON, the Netherlands) and his colleagues discovered six galaxies with little to no dark matter, they were told “measure again, you'll see that there will be dark matter around your galaxy”. However, after fourty hours of detailed observations using the Very Large Array (VLA) in New Mexico (United States), the evidence for a dark matter-free galaxy only became stronger.

The galaxy in question, AGC 114905, is about 250 million light-years away. It is classified as an ultra-diffuse dwarf galaxy, with the name ‘dwarf galaxy’ referring to its luminosity and not to its size. The galaxy is about the size of our own Milky Way but contains a thousand times fewer stars. The prevailing idea is that all galaxies, and certainly ultra-diffuse dwarf galaxies, can only exist if they are held together by dark matter.

The researchers collected data on the rotation of gas in AGC 114905 for 40 hours between July and October 2020 using the VLA telescope. Subsequently, they made a graph showing the distance of the gas from the centre of the galaxy on the x-axis and the rotation speed of the gas on the y-axis. This is a standard way to reveal the presence of dark matter. The graph shows that the motions of the gas in AGC 114905 can be completely explained by just normal matter.

"This is, of course, what we thought and hoped for because it confirms our previous measurements," says Pavel Mancera Piña. "But now the problem remains that the theory predicts that there must be dark matter in AGC 114905, but our observations say there isn't. In fact, the difference between theory and observation is only getting bigger."

In their scientific publication, the researchers list the possible explanations for the lack of dark matter one by one. For example, AGC 114905 could have been stripped of dark matter by large nearby galaxies. Mancera Piña: "But there are none. And in the most reputed galaxy formation framework, the so called cold dark matter model, we would have to introduce extreme parameter values that are far beyond the usual range. Also with modified Newtonian dynamics, an alternative theory to cold dark matter, we cannot reproduce the motions of the gas within the galaxy."

According to the researchers, there is one more assumption that could change their conclusions. That is the estimated angle at which they think they are observing the galaxy. "But that angle has to deviate very much from our estimate before there is room for dark matter again," says co-author Tom Oosterloo (ASTRON).

Meanwhile, the researchers are examining a second ultra-diffuse dwarf galaxy in detail. If again observe no  trace of dark matter in that galaxy, it will make the case for dark matter poor galaxies even stronger.