Undead planets: the unusual conditions of the first exoplanet detection 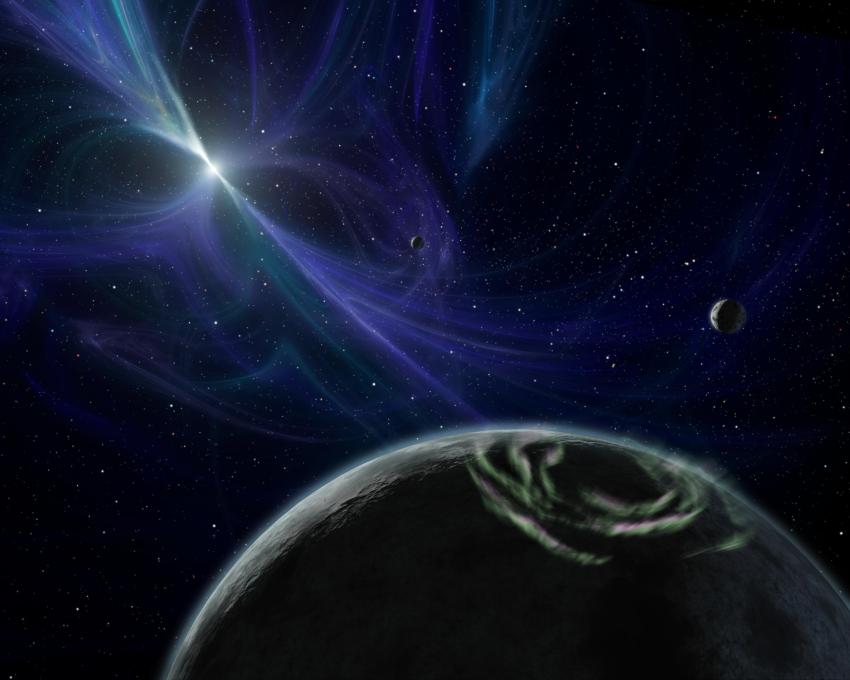 Artist impression of the pulsar-planet system PSR B1257+12 detected in 1992. The pulsar and three radiation-doused planets are all that remains of a dead star system.
Credit
NASA/JPL-Caltech
Licence type
Attribution (CC BY 4.0)

The first ever exoplanets were discovered 30 years ago around a rapidly rotating star, called a pulsar. Now, astronomers have revealed that these planets may be incredibly rare. The new work will be presented tomorrow (Tuesday 12 July) at the National Astronomy Meeting (NAM 2022) by Iuliana Nițu, a PhD student at the University of Manchester.

The processes that cause planets to form, and survive, around pulsars are currently unknown. A survey of 800 pulsars followed by the Jodrell Bank Observatory over the last 50 years has revealed that this first detected exoplanet system may be extraordinarily uncommon: less than 0.5% of all known pulsars could host Earth-mass planets.

Pulsars are a type of neutron star, the densest stars in the universe, born during powerful explosions at the end of a typical star’s life. They are exceptionally stable, rapidly rotating, and have incredibly strong magnetic fields. Pulsars emit beams of bright radio emission from their magnetic poles that appear to pulse as the star rotates.

“[Pulsars] produce signals which sweep the Earth every time they rotate, similarly to a cosmic lighthouse,” says Nițu. “These signals can then be picked up by radio telescopes and turned into a lot of amazing science.”

In 1992, the first ever exoplanets were discovered orbiting a pulsar called PSR B1257+12. The planetary system is now known to host at least three planets similar in mass to the rocky planets in our Solar System. Since then, a handful of pulsars have been found to host planets. However, the extremely violent conditions surrounding the births and lives of pulsars make ‘normal’ planet formation unlikely, and many of these detected planets are exotic objects (such as planets made mostly of diamond) unlike those we know in our Solar System.

A team of astronomers at the University of Manchester performed the largest search for planets orbiting pulsars to date. In particular, the team looked for signals that indicate the presence of planetary companions with masses up to 100 times that of the Earth, and orbital time periods between 20 days and 17 years. Of the 10 potential detections, the most promising is the system PSR J2007+3120 with the possibility of hosting at least two planets, with masses a few times bigger than the Earth, and orbital periods of 1.9 and ~3.6 years.

The results of the work indicate no bias for particular planet masses or orbital periods in pulsar systems. However, the results do yield information of the shape of these planets’ orbits: in contrast to the near-circular orbits found in our Solar System, these planets would orbit their stars on highly elliptical paths. This indicates that the formation process for pulsar-planet systems is vastly different than traditional star-planet systems.

Discussing the motivation of her research, Nițu says: “Pulsars are incredibly interesting and exotic objects. Exactly 30 years ago, the first extra-solar planets were discovered around a pulsar, but we are yet to understand how these planets can form and survive in such extreme conditions. Finding out how common these are, and what they look like is a crucial step towards this.”

This work is to be presented at the 2022 National Astronomy Meeting on Monday 11 July.

Image link: https://nam2022.org/images/artist_impression.jpeg
Credit: NASA/JPL-Caltech
Caption: Artist impression of the pulsar-planet system PSR B1257+12 detected in 1992. The pulsar and three radiation-doused planets are all that remains of a dead star system.