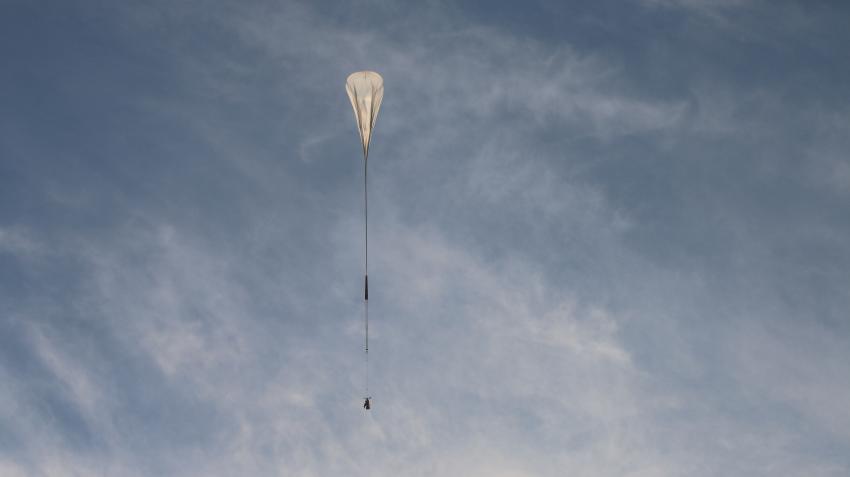 Durham, Toronto and Princeton Universities have teamed up with NASA and the Canadian Space Agency to build a new kind of astronomical telescope. SuperBIT flies above 99.5% of the Earth’s atmosphere, carried by a helium balloon the size of a football stadium. The telescope will make its operational debut next April and when deployed should obtain high-resolution images rivalling those of the Hubble Space Telescope. Mohamed Shaaban, a PhD student at the University of Toronto, will describe SuperBIT in his talk today (Wednesday 21 July) at the online RAS National Astronomy Meeting (NAM 2021). 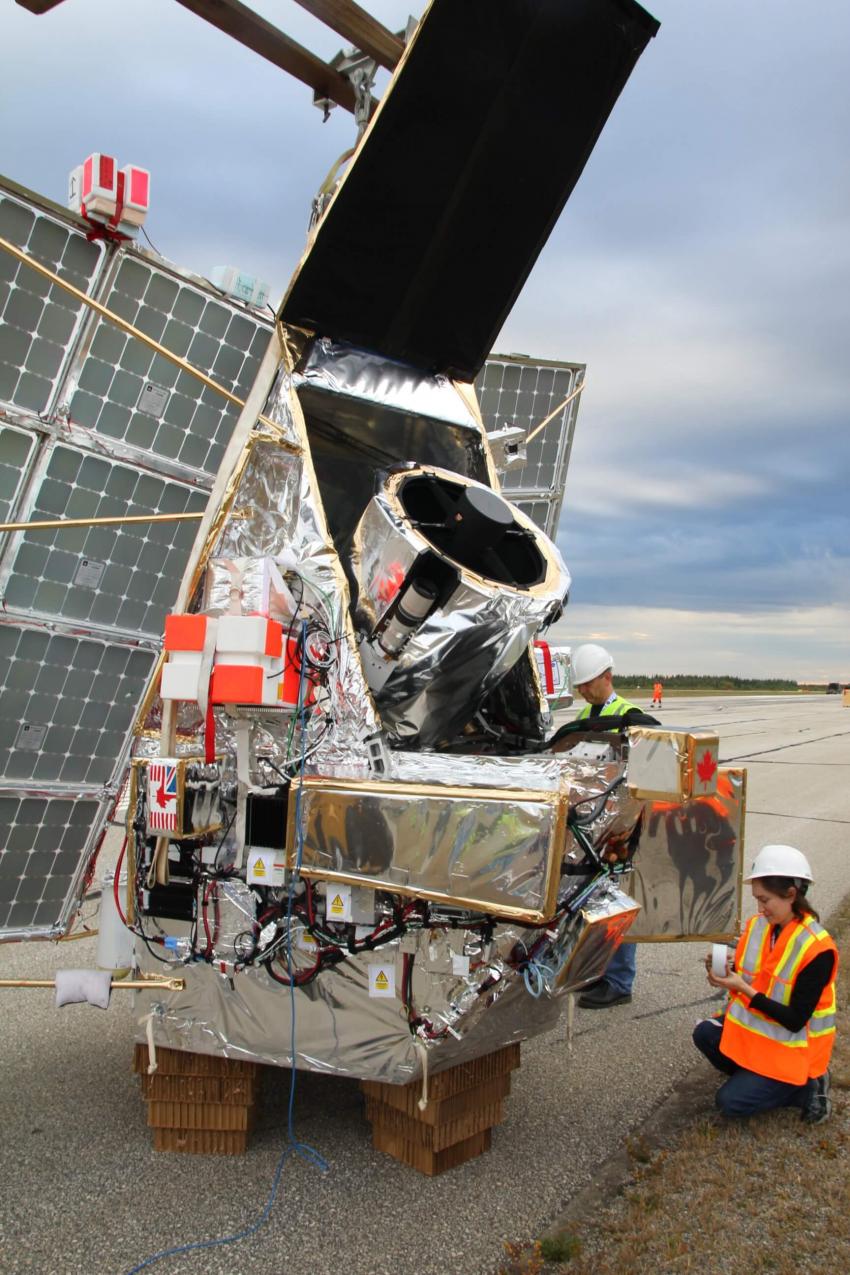 Light from a distant galaxy can travel for billions of years to reach our telescopes. In the final fraction of a second, the light has to pass through the Earth’s swirling, turbulent atmosphere. Our view of the universe becomes blurred. Observatories on the ground are built at high altitude sites to overcome some of this, but until now only placing a telescope in space escapes the effect of the atmosphere.

The Superpressure Balloon-borne Imaging Telescope (or SuperBIT) has a 0.5 metre diameter mirror and is carried to 40km altitude by a helium balloon with a volume of 532,000 cubic metres, about the size of a football stadium.

Its final test flight in 2019 demonstrated extraordinary pointing stability, with variation of less than one thirty-six thousandth of a degree for more than an hour. This should enable a telescope to obtain images as sharp as those from the Hubble Space Telescope.

Nobody has done this before, not only because it is exceedingly difficult, but also because balloons could stay aloft for only a few nights: too short for an ambitious experiment.  However, NASA recently developed ‘superpressure’ balloons able to contain helium for months. SuperBIT is scheduled to launch on the next long duration balloon, from Wanaka, New Zealand, in April. Carried by seasonally stable winds, it will circumnavigate the Earth several times - imaging the sky all night, then using solar panels to recharge its batteries during the day.

With a budget for construction and operation for the first telescope of US$5 million (£3.62 million), SuperBIT cost almost 1000 times less than a similar satellite. Not only are balloons cheaper than rocket fuel, but the ability to return the payload to Earth and relaunch it means that its design has been tweaked and improved over several test flights. Satellites must work first time, so typically have (phenomenally expensive) redundancy, and decade-old technology that had to be space-qualified by the previous mission. Modern digital cameras improve every year - so the development team bought the cutting-edge camera for SuperBIT’s latest test flight a few weeks before launch. This space telescope will continue to be upgradable, or have new instruments on every future flight. 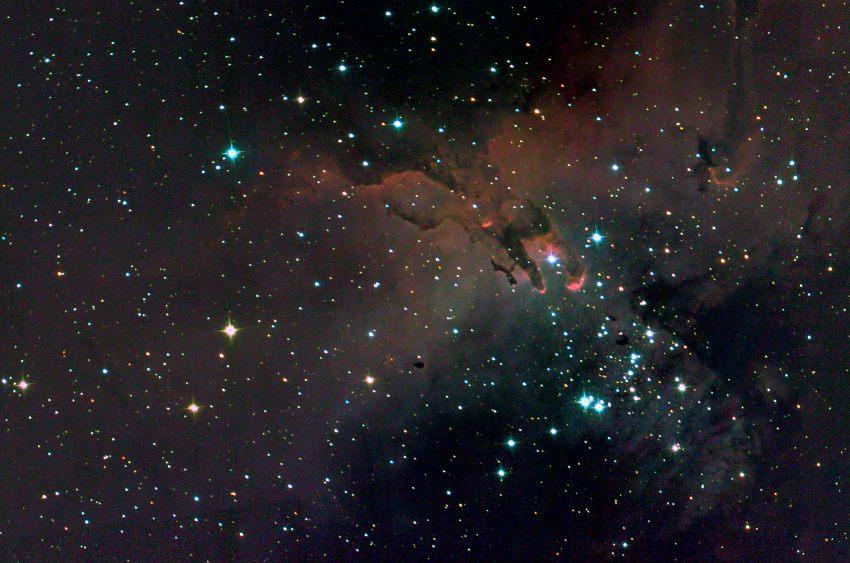 A SuperBIT optical and ultraviolet composite image of the ‘Pillars of Creation’, trunks of gas and dust in the Eagle Nebula, 7,000 light years away in the direction of the constellation of Serpens.
SuperBIT team, from Romualdez et al. (2018) SPIE 10702
Licence type
Attribution (CC BY 4.0)

In the longer term, the Hubble Space Telescope will not be repaired again when it inevitably fails. For 20 years after that, European Space Agency/NASA missions will enable imaging only at infrared wavelengths (like the James Webb Space Telescope due to launch this autumn), or a single optical band (like the Euclid observatory due to launch next year).

By then SuperBIT will be the only facility in the world capable of high-resolution multicolour optical and ultraviolet observations. The team already has funding to design an upgrade from SuperBIT’s 0.5 metre aperture telescope to 1.5 metres (the maximum carrying capacity of the balloon is a telescope with a mirror about 2 metres across). Boosting light gathering power tenfold, combined with its wider angle lens and more megapixels, will make this larger instrument even better than Hubble. The cheap cost even makes it possible to have a fleet of space telescopes offering time to astronomers around the world.

“New balloon technology makes visiting space cheap, easy, and environmentally friendly,” said Shaaban. “SuperBIT can be continually reconfigured and upgraded, but its first mission will watch the largest particle accelerators in the Universe: collisions between clusters of galaxies.”

The science goal for the 2022 flight is to measure the properties of dark matter particles. Although dark matter is invisible, astronomers map the way it bends rays of light, a technique known as gravitational lensing. SuperBIT will test whether dark matter slows down during collisions. No particle colliders on Earth can accelerate dark matter, but this is a key signature predicted by theories that might explain recent observations of weirdly behaving muons.

“Cavemen could smash rocks together, to see what they’re made of,” added Prof. Richard Massey of Durham University. “SuperBIT is looking for the crunch of dark matter. It’s the same experiment, you just need a space telescope to see it.”

Footage of SuperBIT’s second test flight from NASA’s Columbia Scientific Balloon Facility, Texas, in June 2016. The first segment is speeded up, time-lapse footage of preparation for flight. The second part runs at a normal rate, showing the launch and flight itself. Credit: Richard Massey, Javier Romualdez and the SuperBIT team.

Footage of SuperBIT’s second test flight from NASA’s Columbia Scientific Balloon Facility, Texas, in June 2016. The first segment is speeded up, time-lapse footage of preparation for flight. The second part runs at a normal rate, showing the launch and flight itself. Credit: Richard Massey, Javier Romualdez and the SuperBIT team.

A SuperBIT optical and ultraviolet composite image of the ‘Pillars of Creation’, trunks of gas and dust in the Eagle Nebula, 7,000 light years away in the direction of the constellation of Serpens. Credit: SuperBIT team, from Romualdez et al. (2018) SPIE 10702.

Durham University is a globally outstanding centre of teaching and research based in historic Durham City in the UK. We are a collegiate university committed to inspiring our people to do outstanding things at Durham and in the world.

We conduct boundary-breaking research that improves lives globally and we are ranked as a world top 100 university with an international reputation in research and education (QS World University Rankings 2021.)