Rare transit of Mercury to take place on 11 November 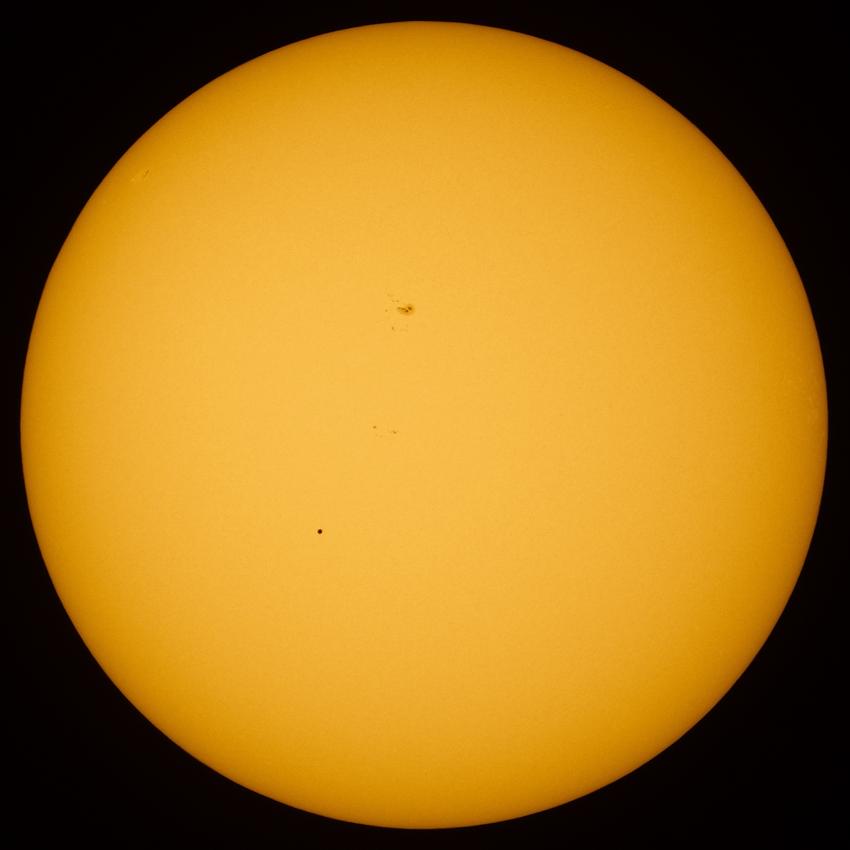 A photograph of the transit of Mercury of 9 May 2016. Mercury is seen in silhouette as the dark dot below left of centre. The other dark features are sunspots.
Credit
Wikipedia / Elijah Mathews
Licence type
Attribution-ShareAlike (CC BY-SA 4.0)

A rare transit of Mercury will take place on 11 November, when the smallest planet in our Solar System will pass directly between the Earth and the Sun. The last time this happened was in 2016, and the next will be in 2032. During the transit, which takes place in the afternoon in the UK, Mercury will appear as a dark silhouetted disc set against the bright surface of the Sun.

On the morning of 11 November, UK amateur astronomical societies and public observatories will be running events where members of the public can safely enjoy the transit, as well as live webcasts of the spectacle. The Royal Astronomical Society will be supporting a (free) event run by the Baker Street Irregular Astronomers in Regent’s Park, central London, where members of the public can book places to come and view the transit using appropriate equipment at no cost.

Professor Mike Cruise, President of the Royal Astronomical Society, is keen for people to experience the transit for themselves. "This is a rare event, and we’ll have to wait 13 years until it happens again. Transits are a visible demonstration of how the planets move around the Sun, and everyone with access to the right equipment should take a look, or go to an organised event if the weather is clear, or alternatively follow one of the live webcasts. I do want to stress though that people must follow the safety advice – looking at the Sun without appropriate protection can seriously damage your eyes.”

The entire event is visible from the eastern United States and Canada, the south-western tip of Greenland, most of the Caribbean, central America, the whole of South America and some of west Africa. In Europe (including the UK), the middle East, and most of Africa, the sun will set before the transit ends, and so the latter part of the event will not be visible. In most of the United States and Canada, and New Zealand, the transit will be in progress as the sun rises. Observers in eastern Asia, southern and south-eastern Asia, and Australia will not be able to see the transit.

There are 13 or 14 transits of Mercury each century, so they are comparatively rare events, though each one can typically be seen over a large area of the Earth's surface. A transit was first seen in 1631, two decades after the invention of the telescope, by French astronomer Pierre Gassendi.

At any time, Mercury blocks out no more than a tiny part of the light from the Sun. This means that the event should NOT be viewed with the naked eye. Looking at the Sun without appropriate protection, either during the transit, or at any other time, can cause serious and permanent damage to the eyes.

The Society for Popular Astronomy has an online guide on how to safely view the transit, for example by projecting the solar image with binoculars or a telescope. Mercury is too small to be visible using the pinhole projectors that worked successfully in the solar eclipse in March 2015, and similarly cannot be seen by using ‘eclipse glasses’ with solar filters.

Observers with access to a moderate-sized telescope with an appropriate safe filter should be able to see Mercury as a dark disc, comparable in apparent size to a sunspot, but somewhat darker. At the beginning and end of the transit, when Mercury's limb is close to the edge of the Sun, it may also be possible to see the 'black drop' effect, where a broad line appears to connect the planet to the solar limb. This is thought to result from the quality of the telescope in use, and turbulence in the Earth's atmosphere (so-called 'seeing'), and has in the past compromised efforts to record transit times.

As it is so close to the Sun, Mercury is difficult to study in detail using telescopes on Earth. Two NASA space probes have visited Mercury, Mariner 10 in 1974 and 1975, and MESSENGER, which orbited the planet from 2011 until a deliberate crash landing in 2015. The European Space Agency mission BepiColombo launched in 2017, and is expected to study the planet from 2024 onwards. UK scientists are making a significant contribution to this project.

Transit techniques are also deployed to study objects outside our Solar System, and for example missions like the NASA Kepler space telescope used it to confirm the presence of 2,662 planets in orbit around other stars. The same technique will be used by the European Space Agency's PLATO mission, expected to launch in 2026.

A photograph of the transit of Mercury of 9 May 2016. Mercury is seen in silhouette as the dark dot below left of centre. The other dark features are sunspots.
Credit
Wikipedia / Elijah Mathews
Licence type
Attribution-ShareAlike (CC BY-SA 4.0) 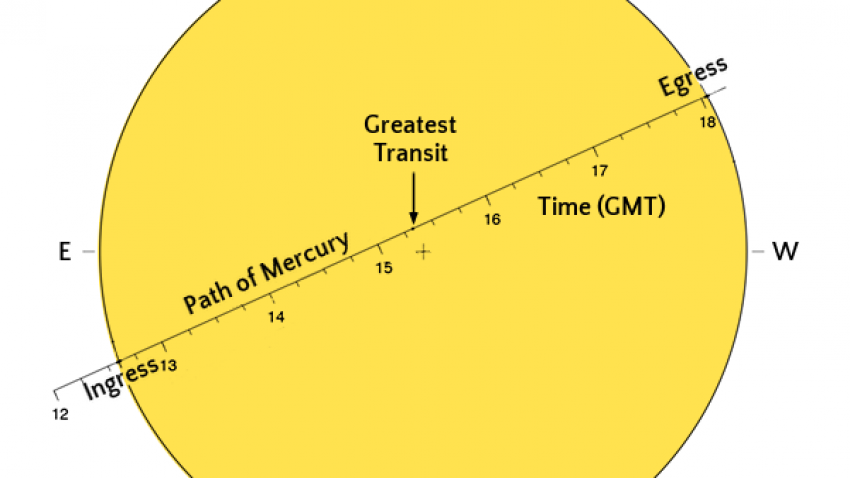 A diagram showing the path of Mercury in front on the Sun on 11 November 2019. All times are in GMT. Mercury will appear to move from left to right as the event progresses, from ingress (the start) at 12:35 until egress (the end) at 18:04.
Credit
Royal Astronomical Society
Licence type
Attribution (CC BY 4.0)