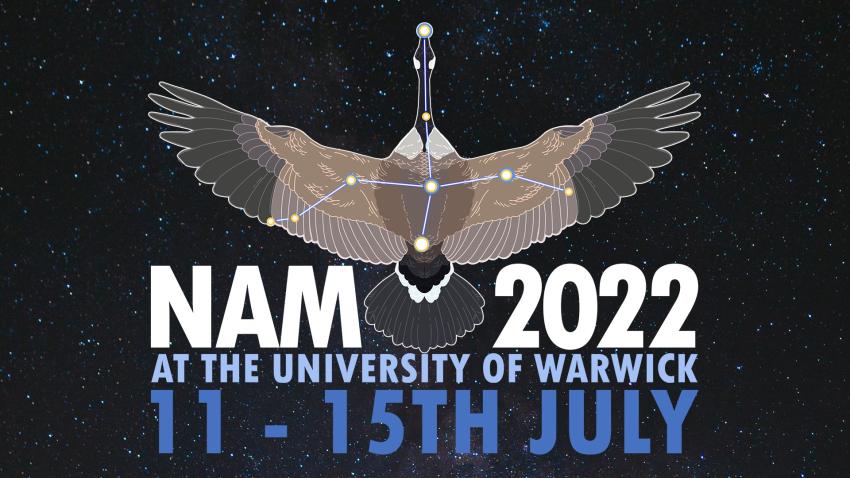 Journalists are warmly invited to attend the Royal Astronomical Society National Astronomy Meeting (NAM 2022), to take place at the University of Warwick from 11-15 July. We are delighted to announce that the UK’s largest regular gathering of professional astronomers and space scientists will once again be an in person event, with hundreds of delegates on site, and a similar number also expected to join online.

NAM 2022 will see leading scientists from the UK and around the world present the latest cutting-edge research in astronomy and space science. 44 parallel sessions over the five days of the conference will cover topics as diverse as space weather, solar physics, the atmospheres of planets around other stars, dark matter, the formation of the first stars and galaxies in the early universe, the third data release from the Gaia satellite, prospects for the Square Kilometer Array and Vera Rubin Observatory, gravitational waves, gamma ray bursts, using machine learning on astronomical data, and ensuring the sustainable use of space.

Meeting arrangements and a full and up to date schedule of the scientific programme can be found on the official website and via the conference Twitter account.

Details of media releases and registration information are on our dedicated conference media page.

Media representatives are cordially invited to attend the meeting and can register at no cost. Press room facilities will be available for the duration of the conference – from 09:00 BST on Monday 11 July to 15:00 BST on Friday 15 July. A series of releases, issued under embargo, will cover key scientific results presented at the meeting.

For free registration, and to obtain access to embargoed releases via the (password-protected) media site, please contact a member of the press team below.