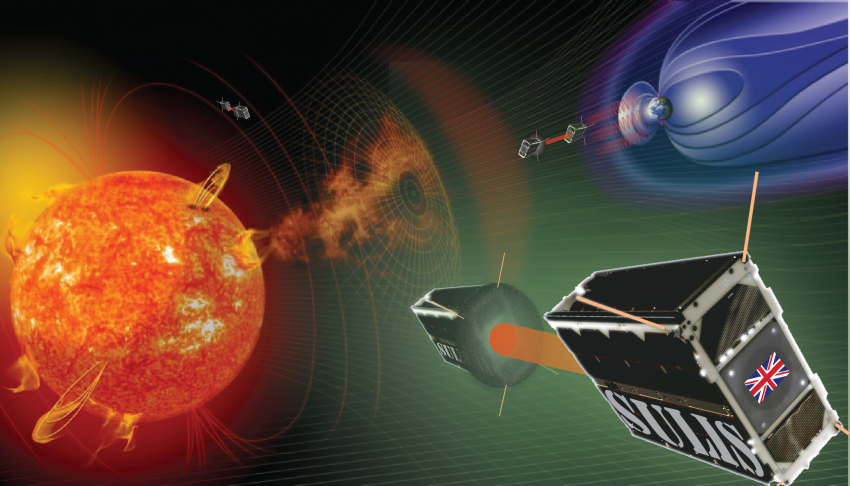 Three pairs of formation-flying coronagraphs make up the SULIS mission. With three viewpoints SULIS will reconstruct the 3D properties of coronal mass ejections from the Sun that cause space weather impacts on Earth. Credit: Dr Eamon Scullion Northumbria University Newcastle upon Tyne.

Named after a Celtic goddess of the Sun, SULIS is a UK-led solar science mission, designed to answer fundamental questions about the physics of solar storms. The mission consists of a cluster of small satellites and will carefully monitor solar storms using state-of-the-art UK technology, as well as demonstrating new technologies in space. Lead Investigator on the project, Dr Eamon Scullion of Northumbria University, will reveal plans for the mission on Wednesday, 3 July at the Royal Astronomical Society’s National Astronomy Meeting in Lancaster.

Once funded, the mission will study the nature of solar eruptions, and track huge magnetic clouds of charged gas as they travel at high speed on a collision course with Earth. “SULIS will apply high definition remote sensing in 3D to help space scientists finally understand what these magnetic clouds of charged gas are made of, how much matter they contain, what causes their eruption, how fast they are travelling and, most importantly, how damaging they could be to Earth” explains Scullion.

Solar storms occur when the Sun releases enormous bursts of energy as solar flares, launching huge magnetic clouds of charged gas, known as coronal mass ejections. It is the interaction of these charged particles with the Earth’s atmosphere that results in aurora, but solar storms can also have a more significant impact on Earth, causing global mobile phone or GPS disruption, radio blackouts, and satellite failures.

The coronal magnetic field is one of the most important physical properties of the solar atmosphere and yet it is one of the least explored. SULIS will include instruments to directly measure the magnetic field of the solar corona for the first time, with three pairs of formation-flying coronagraphs in orbit around the Sun. The first pair will be put into Earth orbit, with the other two pairs to be positioned ahead of, and behind, Earth in its orbit for a mission lifetime of 10 years.

Severe space weather is included on the UK National Risk Register, meaning government departments including military, energy, civil aviation, and transport must plan for this risk. “Solar storms are unavoidable” says Scullion, “but with SULIS we will learn about their basic building blocks in order to more accurately forecast when the next ‘big one’ will arrive. Having advanced warnings will enable us to take steps to minimise the impact”.

On 2 July 2019, SULIS Co-Investigator Dr Huw Morgan, will be part of a team of solar scientists from Aberystwyth University visiting Chile to observe the total solar eclipse. The eclipse provides ideal conditions for testing a state-of-the-art compact hyperspectral imager, which is expected to become incorporated into the SULIS mission on one of satellite pairs. Dr Morgan says, “The SULIS consortium are now awaiting the outcome of the eclipse observing run with high expectations for spectacular HD images of the solar corona”.

SULIS is not only designed to be a space science mission, but also to demonstrate technology for precision alignment of small satellites flying in formation, and future communications.

Precision manoeuvring in formation-flying is a challenge for satellite constellations and is crucial for maintaining a functioning coronagraph in space. The coronagraph is essentially an artificial eclipse created by one satellite in a pair eclipsing the Sun with respect to the view of the other satellite. This eclipsing is required in order to block out the bright light of the Sun surface in order to detect and measure the properties of the faint light coming only from the corona. SULIS will investigate the nature of the magnetic field in the corona through inspecting subtle changes in the properties of the coronal light itself.

The mission will also demonstrate the use of laser power transfer in space and laser communications in Low Earth Orbits (i.e. for both inter-satellite communications and satellite-to-Earth communications). This is essential for small satellites with instruments capable of recording vast amounts of data, which either require more efficient ways to store large volumes of data locally, or mechanisms for moving data off the satellites extremely rapidly to avoid hardware and data telemetry issues.

On the SULIS mission, one of the satellites in the formation-flying pair will be shadowed by the other, meaning that the partially eclipsed satellite will require some additional power. This will be done through a laser power exchange with the satellite that is in permanent sunlight in order to carry out all its functions.

The ability to transfer power to otherwise “dead” satellites could be highly useful for future small satellite cluster missions, increasing their longevity, and helping to manage the ever-growing space debris problem.

“We are excited to be developing a mission to expand the UK’s role in solar physics” says Scullion. “The SULIS mission complements existing and proposed operational space weather missions from Nasa and Esa and will help pave the way for future space weather instruments”.

SULIS Cubsat Pair. A 90 cm diameter external occulter extends (post-launch) from the sunward Leading CubeSat, resulting in an artificial eclipse falling on the anti-sunward Trailing CubeSat instrumentation, with a separation of 100 m. The pair of CubeSat’s will fly in formation maintaining positioning via an ion propulsion thruster system throughout the 5-year mission lifetime. Uniquely, the Leading CubeSat serves as an occulter, as well as, housing instrumentation for solar observations of coronal magnetic fields. Credit: Dr Eamon Scullion Northumbria University Newcastle upon Tyne

SULIS mission concept video
Credit: Video production was funded by the Faculty of Engineering and Environment Northumbria University Newcastle upon Tyne. Video animation was generated by pinksquare.com in collaboration with the SULIS consortium.

The SULIS mission concept will be presented by Dr Eamon Scullion during the MIST/UKSP lunch session at the RAS National Astronomy Meeting in Lancaster on Wednesday 3 July, 2019.

About SULIS
SULIS is the only large-scale fundable solar system project listed in the Science and Technology Facilities Council’s “Developing a World Class Research” programme. It has already started to receive investment from Northumbria University, Aberystwyth University and the Welsh government for conducting technical feasibility and design studies. The mission is UK-led involving eight UK universities, world leading UK-based industry, and UK key stakeholders (e.g. Met Office). For more information about SULIS and for a video animation of the mission concept see the mission website.

NAM 2019
The RAS National Astronomy Meeting (NAM 2019) is taking place at the University of Lancaster from 30 June to 4 July 2019. It includes the annual meetings of the UK Solar Physics (UKSP) and Magnetosphere Ionosphere Solar-Terrestrial (MIST) groups. The conference is principally sponsored by the Royal Astronomical Society (RAS), the Science and Technology Facilities Council (STFC) and Lancaster University. Full details are visible on the dedicated conference website. Access credentials for embargoed press materials are available on request from the NAM press team via nam-press@ras.ac.uk.

About the Royal Astronomical Society
The Royal Astronomical Society (RAS), founded in 1820, encourages and promotes the study of astronomy, solar-system science, geophysics and closely related branches of science. The RAS organises scientific meetings, publishes international research and review journals, recognizes outstanding achievements by the award of medals and prizes, maintains an extensive library, supports education through grants and outreach activities and represents UK astronomy nationally and internationally. Its more than 4,000 members (Fellows), a third based overseas, include scientific researchers in universities, observatories and laboratories as well as historians of astronomy and others.
Twitter: @RoyalAstroSoc
Facebook: RoyalAstroSoc
Instagram: RoyalAstroSoc
YouTube: RoyalAstroSoc

About the Science and Technology Facilities Council
The Science and Technology Facilities Council is part of UK Research and Innovation – the UK body which works in partnership with universities, research organisations, businesses, charities, and government to create the best possible environment for research and innovation to flourish. STFC funds and supports research in particle and nuclear physics, astronomy, gravitational research and astrophysics, and space science and also operates a network of five national laboratories as well as supporting UK research at a number of international research facilities including CERN, FERMILAB and the ESO telescopes in Chile. STFC is keeping the UK at the forefront of international science and has a broad science portfolio and works with the academic and industrial communities to share its expertise in materials science, space and ground-based astronomy technologies, laser science, microelectronics, wafer scale manufacturing, particle and nuclear physics, alternative energy production, radio communications and radar.