Astronomers confirm age of most distant galaxy with oxygen 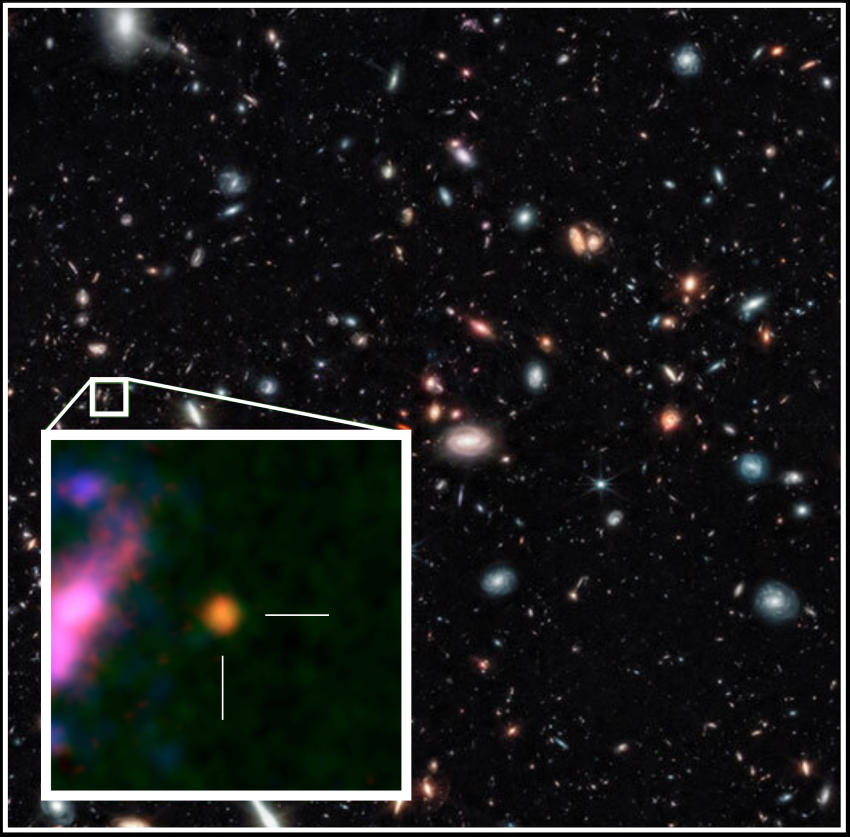 The radio telescope array ALMA has pin-pointed the exact cosmic age of a distant JWST-identified galaxy, GHZ2/GLASS-z12, at 367 million years after the Big Bang. ALMA’s deep spectroscopic observations revealed a spectral emission line associated with ionized Oxygen near the galaxy, which has been shifted in its observed frequency due to the expansion of the Universe since the line was emitted. This observation confirms that the JWST is able to look out to record distances, and heralds a leap in our ability to understand the formation of the earliest galaxies in the Universe.
Credit
NASA / ESA / CSA / T. Treu, UCLA / NAOJ / T. Bakx, Nagoya U.
Licence type
Attribution (CC BY 4.0)

A new study led by a joint team at Nagoya University and the National Astronomical Observatory of Japan has measured the cosmic age of a very distant galaxy. The team used the ALMA radio telescope array to detect a radio signal that has been travelling for approximately 97% of the age of the Universe. This discovery confirms the existence of galaxies in the very early Universe found by the James Webb Space Telescope. The research is published in Monthly Notices of the Royal Astronomical Society.

The galaxy, named GHZ2/GLASS-z12, was initially identified in the JWST GLASS survey, a survey that observes the distant Universe and behind massive clusters of galaxies. These observations consist of several images using different broad-band colour filters, similar to the separate RGB colours in a camera. For distant galaxies, the light takes such a long time to reach us that the expansion of the Universe has shifted the colour of this light towards the red end of the visible light spectrum in the so-called redshift. The red colour of GHZ2/GLASS-z12 consequently helped researchers identify it as one of the most convincing candidates for a distant galaxy they observed.

So many bright distant galaxies were identified in the first few weeks of JWST observations that it challenged our basic understanding of the formation of the earliest galaxies. However, these red colours are only indicative of a distant galaxy, and could instead be a very dust-rich galaxy masquerading as a more distant object. Only direct observations of spectral lines – lines present in a galaxy’s light spectrum used to identify the elements present – can robustly confirm the true distances of these galaxies.

Immediately after the discovery of these early galaxy candidates, two early-career researchers at Nagoya University and the National Astronomical Observatory of Japan used the forty radio telescopes of the ALMA array in Chile to hunt for a spectral line to confirm the true ages of the galaxies. 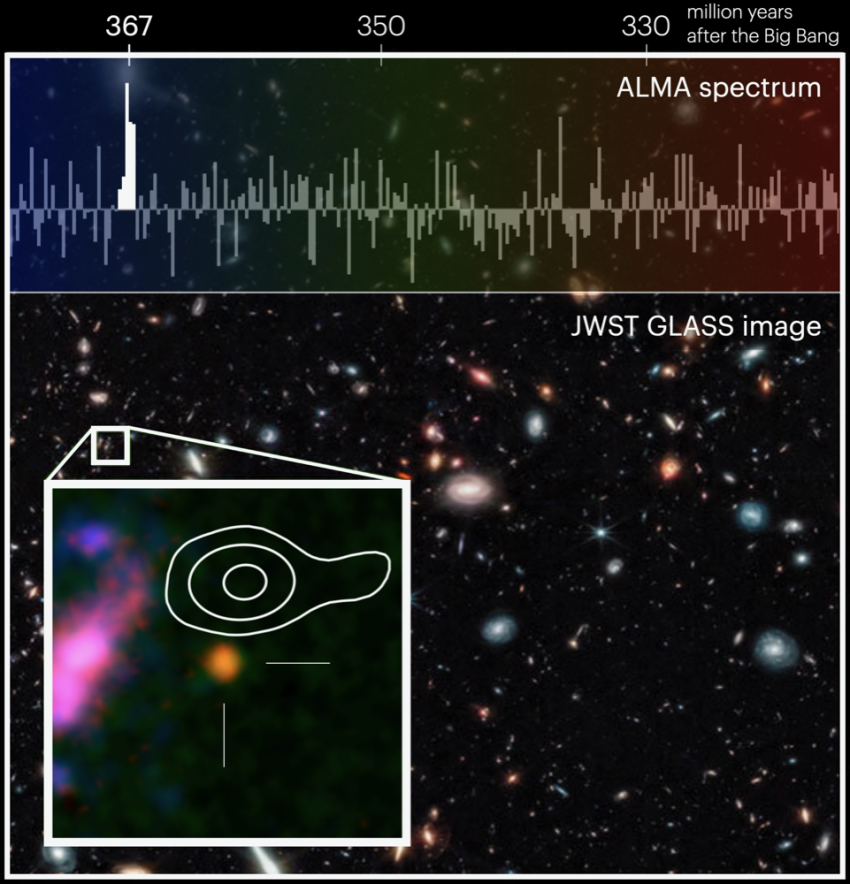 The image of galaxy GHZ2/GLASS-z12 with the associated ALMA spectrum. ALMA’s deep spectroscopic observations revealed a spectral emission line associated with ionized Oxygen near the galaxy, which has been shifted in its observed frequency due to the expansion of the Universe since the line was emitted.
NASA / ESA / CSA / T. Treu, UCLA / NAOJ / T. Bakx, Nagoya U.

ALMA pointed at GHZ2/GLASS-z12 to hunt for an emission line associated with oxygen at the expected frequency suggested by the JWST observations. Oxygen is a typically abundant element in distant galaxies due to its relatively short formation timescale, therefore the team chose to search for an oxygen emission line to increase chances of detection.

By combining the signal of each of its 12 metre telescopes, ALMA was able to detect the emission line close to the position of the galaxy. The observed redshift of the line indicates we see the galaxy as it was just 367 million years after the Big Bang.

“The first images of the James Webb Space Telescope revealed so many early galaxies, that we felt we had to test its results using the best observatory on Earth”, said lead author Tom Bakx of Nagoya University. “It was a very exciting time to be an observational astronomer, and we could track the status of the observations that will test the JWST results in real time.”

“We were initially concerned about the slight variation in position between the detected oxygen emission line and the galaxy seen by Webb”, author Tom Bakx notes, “but we performed detailed tests on the observations to confirm that this really is a robust detection, and it is very difficult to explain through any other interpretation.”

Co-lead author Jorge Zavala of the National Astronomical Observatory of Japan adds, “The bright line emission indicates that this galaxy has quickly enriched its gas reservoirs with elements heavier than hydrogen and helium. This gives us some clues about the formation and evolution of the first generation of stars and their lifetime. The small separation we see between the oxygen gas and the stars’ emission might also suggest that these early galaxies suffered from violent explosions that blew the gas away from the galaxy centre into the region surrounding the galaxy and even beyond.”

“These deep ALMA observations provide robust evidence of the existence of galaxies within the first few hundred million years after the Big Bang, and confirms the surprising results from the Webb observations. The work of JWST has only just begun, but we are already adjusting our models of how galaxies form in the early Universe to match these observations. The combined power of Webb and the radio telescope array ALMA give us the confidence to push our cosmic horizons ever closer to the dawn of the Universe.”