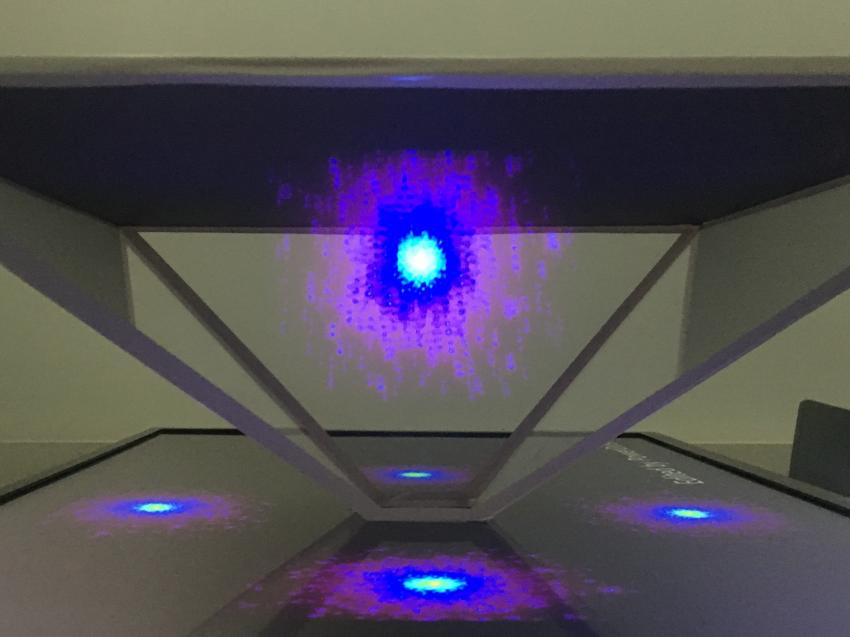 Scientists working on unravelling the mysteries of star cluster formation have found an innovative way of sharing their work with the general public. Taking inspiration from a 19th century magic trick, researchers from the University of Leeds have developed 3D holograms that allow people to watch massive stars forming before their eyes.

Dr Anne Buckner will be demonstrating the holograms at the Royal Astronomical Society’s National Astronomy Meeting in Lancaster from 1- 4 July 2019.

“Our research focusses on how massive stars form” she explains, “it’s inherently an abstract and complex topic to non-experts, so we developed the 3D holograms to help explain it in an easy to understand and visually engaging way”.

Funded by a two-year STFC Public Engagement SPARKS award, a the team have developed a one-hour workshop which takes participants through the story of star formation (using a combination of presentation slides and holograms), and then explains how the hologram technology works. The holograms are created using an upside-down Perspex pyramid placed on a 65-inch monitor that plays a specially formatted video.

In addition to the 65-inch monitor for events at the University of Leeds, a “travel-sized” version of the kit (with a 32-inch monitor) allows the team to take their research to schools, conferences, and public events such as festivals. Participants are given the chance to make their own smart-phone size hologram creator which they can take home with them.

Attempting to imagine evolving star clusters - thousands of light-years away - is challenging (even for experts in the field) and although 2D images from telescopes or computer simulations, are regularly used as visual aids, the StarFormMapper team were keen to find a way to demonstrate star formation in 3D.

Researchers on the StarFormMapper project use a combination of observational and theoretical data to understand the mechanisms underlying massive star, and star cluster, formation. With the advent of ESA’s Gaia and Herschel missions, an increasing amount of data is available to the researchers, who are ultimately hoping their scientific results will underpin the study of how all galaxies evolve.

“We wanted to excite school kids about astrophysics” says Buckner. Virtual reality headsets were an obvious choice, but they were too expensive, and would be impractical for large audiences, so Buckner took inspiration from an unlikely source: 19th century magic shows.

“As a fan of magic I was aware of an illusion called ‘Pepper's Ghost’ which has been around since the 1800s” she says. “We wondered if we could adapt something similar to this to work for astronomy, and as a result we have the ability to project 3D holograms bringing millions of years of stellar evolution to life”.

Initial audience feedback has been positive, and it appears that the holograms are helping people to better understand the research. Buckner plans to take the workshop on tour and deliver it to secondary school students in West Yorkshire, and there is an app in development which will enable people to watch millions of years of stars forming and evolving in 3D on their smartphone or tablet.

Dr Anne Buckner will be presenting her work during the poster session in the afternoon of Tuesday 2 July, at the RAS National Astronomy Meeting in Lancaster.

The RAS National Astronomy Meeting (NAM 2019) is taking place at the University of Lancaster from 30 June to 4 July 2019. It includes the annual meetings of the UK Solar Physics (UKSP) and Magnetosphere Ionosphere Solar-Terrestrial (MIST) groups. The conference is principally sponsored by the Royal Astronomical Society (RAS), the Science and Technology Facilities Council (STFC) and Lancaster University. Full details are visible on the dedicated conference website https://nam2019.org/. Access credentials for embargoed press materials are available on request from the NAM press team via nam-press@ras.ac.uk