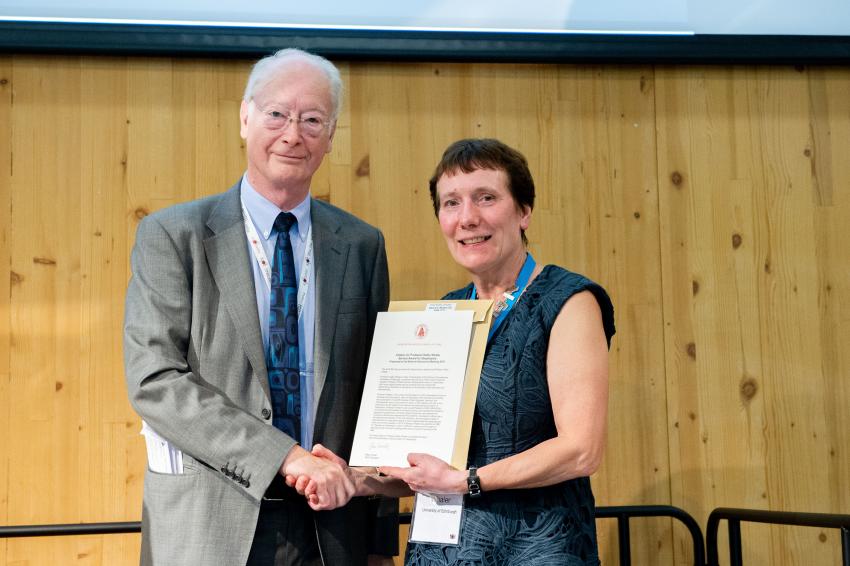 I’m Kathy Whaler, Professor of Geophysics at the University of Edinburgh, and I received the Price Medal in 2013 and the Award for Service to Geophysics in 2019.

Although I toyed with the idea of studying Geophysics for my first degree, eventually I settled on Physics instead, reading for a BSc in Mathematical-Physics from the University of Sussex. However, the lure of geophysics had not evaded me, and I moved from there to do a PhD at the University of Cambridge, using data from the network of permanent geomagnetic observatories.

Towards the end of my PhD and during my Post-Doc years I had several very productive research visits to the USA, working at Scripps Institution of Oceanography, the University of Colorado at Boulder, and NASA’s Goddard Space Flight Center. Also at that time, NASA launched its low Earth orbit vector magnetometer satellite MAGSAT; our science benefitted enormously from that and subsequent satellite missions Ørsted, CHAMP and the current constellation, Swarm.

Besides using terrestrial data, I have worked with orbiting satellite data from Mars and Moon; these studies have helped shed light on their histories, especially related to self-sustaining dynamo action in their cores responsible for their magnetic fields. Starting from my time as a lecturer in Leeds, from where I moved to my current position, I have also collected my own research data, especially over eastern Africa, to model sub-surface electrical resistivity structure.

They have proved particularly useful in studying continental rifting in Ethiopia, as the magma that is helping to drive the plates apart has low resistivity that the data are particularly sensitive to. From other information such as magma composition and temperature, we can constrain the amount of magma in the sub-surface, and interpret the results tectonically with other information such as from seismology.