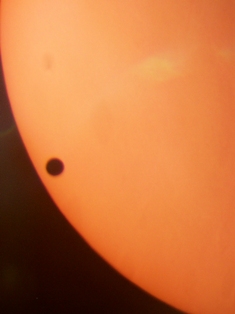 Image Caption
The transit of Venus in 2004. Credit: Charles Barclay

The most recent Transit of Venus occured on 5-6 June 2012. No further transits will be visible until 2117.

In astronomy, a 'transit' occurs when a smaller body passes in front of a larger one. A 'Transit of Venus' happens when Venus is seen in silhouette against the bright face of the Sun.

Although Venus, the Earth and the Sun roughly line up every 584 days, the alignment is not usually precise. Venus' orbital motion usually takes it 'above' or 'below' the Sun as seen from Earth (for the same reason, the Moon does not block out sunlight – causing a solar eclipse – every month). On some rare occasions, the alignment is close enough that Venus blocks out some of the light from the Sun, causing a Transit of Venus. There have only been seven transits of Venus since the telescope was invented in 1610.

On average, Transits of Venus happens every 80 years or so. However, this average figure is very misleading, because transits occur in a 'pair of pairs' pattern that repeats every 243 years. First, two transits take place in December (around Dec 8th), 8 years apart. There follows a wait of 121 years 6 months, after which two June transits occur (around June 7th), again 8 years apart. After 105 years 6 months, the pattern repeats.

Prior to the last transit on 8 June 2004, no living person had seen a Transit of Venus (the previous transit was on 6 December 1882). The next Transit will take place on 5-6 June 2012, but only the final stages will be visible from the UK. The entire event will be seen from eastern Asia and Australasia, the Pacific Ocean and the north-western parts of North America. The next transit of Venus after that will not take place until 2117, so 2012 will be the last chance in most people's lifetimes to see this celestial event.

Observing the 2012 transit: when, where, and how

NEVER LOOK DIRECTLY AT THE SUN, WITH OR WITHOUT A TELESCOPE OR BINOCULARS, WITHOUT USING A SAFE SOLAR FILTER. TO DO SO IS VERY DANGEROUS AND IS LIKELY TO RESULT IN PERMANENT BLINDNESS

The 2012 Transit of Venus occurs on 5-6 June, with the whole event lasting slightly under seven hours. The transit starts at 23:04 British Summer Time (22:04 UTC) on 5 June, after the sun has set in the UK. It will take about 20 minutes from the point when Venus first encroaches onto the disk of the Sun ('first contact') until the planet is fully silhouetted ('second contact'). The planet will then take a curved path across the northern part of the Sun. Mid-transit is at about 02:30 BST (01:30 UTC) on 6 June. Venus begins to leave the Sun ('third contact') at about 05:37 BST (04:37 UTC), and the transit will be over ('fourth contact') at 05:55 BST (04:55 UTC). Timings differ by a few seconds for different latitudes, but the transit will be visible from any place where the Sun is up (clouds permitting).

Unfortunately, this means that only the final stages of the transit will be visible from the UK. As a guide, on 6 June the Sun rises at 04:30 in Edinburgh, 04:46 in London, 04:51 in Belfast and 04:58 in Cardiff (all BST), so observers in the UK will be able to see the final hour or so of the event. 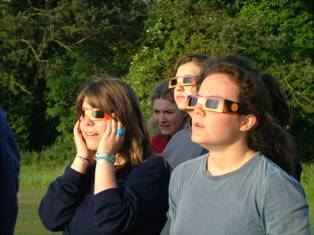 Venus is large enough for its silhouette to be just visible to someone with normal eyesight, without the help of binoculars or a telescope. Its diameter will appear about 1/32 of the diameter of the Sun. For safe viewing of the transit, the same rules apply as those for observing an eclipse of the Sun. Eclipse viewing glasses can be used, as long as they are undamaged and observing is limited to a few minutes at a time. Note that they must NOT be used with binoculars or a telescope. For an enlarged view, an image of the Sun can be projected onto a screen by a small telescope. Pinhole projection, however, will not produce a sharp enough image to show Venus clearly.

Observers should only use eclipse glasses that are marked CE under the EU Directive on the safety of Personal Protective Equipment. These are certified to conform to an agreed and effective safety standard. Under that specification the glasses or their packaging must be marked with any applicable obsolescence deadline (colloquially, the 'best-before' date). The capacity of eclipse glasses to block harmful radiations from the sun reduces with time. For example, glasses bought for the total solar eclipse in Britain in 1999 are now nearly thirteen years old and should not be used. In any case observers should inspect pre-used glasses for damage (scratches, holes, weakened mounting for the lenses...) and consider replacing them if there is a risk that their effectiveness in protecting the eyes is reduced.

The scientific significance of transits

In the 18th and 19th centuries, transits of Venus presented valuable opportunities to tackle a fundamental problem of the time – finding an accurate value for the distance between Earth and the Sun, called the 'Astronomical Unit' (AU). Modern determinations of the AU fix it at 149,597,870.691 km (and involve a complex technical definition, as the Earth–Sun distance varies slightly with time).

In the 21st century, the main interest in the transits of Venus of 2004 and 2012 is their rarity as astronomical phenomena, the educational opportunities they present, and the sense of a link with important events in scientific and world history.

Astronomers are now particularly interested in the general principle of planet transits as a way of hunting for extrasolar planetary systems. When a planet crosses in front of its parent star, there is a minute dip in the star's apparent brightness. Identifying such dips is a useful method of finding planets orbiting other stars, and studying their properties. Some astronomers intend to use the transit of Venus as a test to help design studies of extrasolar planets. The transit will be observed by the Hinode spacecraft, the Hubble Space Telescope (details) and a number of observatories on the ground (see e.g. the Venus Twilight Experiment). 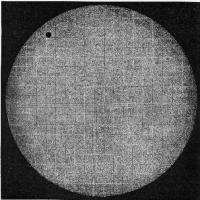 The transit of Venus observed in 1874 by Jules Janssen (click to enlarge). The grid pattern was used to measure precise positions in the image. Credit: RAS Archives

The first person to predict a transit of Venus was Johannes Kepler, who calculated that one would take place on 6 December 1631. Kepler died in 1630, and there is no record of anyone seeing the 1631 event.

Jeremiah Horrocks (sometimes spelled 'Horrox'), a young English astronomer, studied Kepler's planetary tables and discovered that a Transit of Venus should occur on 1639 November 24, just a month after he made the calculation. Horrocks observed part of the transit from his home at Much Hoole, near Preston, Lancashire. His friend William Crabtree also saw it from Manchester, having been alerted by Horrocks. As far as is known, they were the only people to witness the transit. Tragically, Horrocks's promising scientific career was cut short when he died in 1641, aged about 22.

The English astronomer Edmund Halley later realised that observations of Transits of Venus could be used to determine the distance between the Earth and the Sun. The method involves observing and timing a transit from widely spaced latitudes, which show small differences in Venus's track across the Sun (resulting from parallax). Halley died in 1742, but the transits of 1761 and 1769 were observed from many places around the world. James Cook's expedition to Tahiti in 1769 is one of the most famous, and it went on to become a world voyage of discovery. However, results on the Sun–Earth distance were disappointingly inaccurate, as the observations were plagued by many technical difficulties.

Nevertheless, optimistic astronomers tried again with the 1874 transit a century later; some of their efforts are illustrated in the RAS Archives. Unfortunately, as far as determining the value of the AU was concerned, the results were again disappointing. Astronomers began to realise that the practical problems with Halley's simple idea were just too great to overcome. Even so, there was enormous public interest in the 1882 transit, and it was mentioned on the front pages of most newspapers. Thousands of ordinary people saw it, and Professor Sir Robert Stawell Ball described his own feelings on watching the transit in his 1885 book, The Story of Astronomy:

"To have seen even a part of a transit of Venus is an event to remember for a lifetime, and we felt more delight than can be easily expressed... Before the phenomenon had ceased, I spared a few minutes from the somewhat mechanical work at the micrometer to take a view of the transit in the more picturesque form which the large field of the finder presents. The sun was already beginning to put on the ruddy hues of sunset, and there, far in on its face, was the sharp, round, black disk of Venus. It was then easy to sympathize with the supreme joy of Horrocks, when, in 1639, he for the first time witnessed this spectacle. The intrinsic interest of the phenomenon, its rarity, the fulfilment of the prediction, the noble problem which the transit of Venus helps us to solve, are all present to our thoughts when we look at this pleasing picture, a repetition of which will not occur again until the flowers are blooming in the June of A.D. 2004."

One of the chief problems observers of transits faced was pinpointing the exact times of second and third contact. In practice, as Venus crossed onto the Sun, its black disc seemed to remain linked to the edge of the Sun for a short time by a dark 'neck', making it appear almost pear-shaped. The same happened in reverse when Venus began to leave the Sun. This so-called 'black drop effect' was the main reasons why timing the transits failed to produce consistent accurate results for the Sun-Earth distance. Halley expected that second contact could be timed to within about a second; the black drop reduced the accuracy of timing to more like a minute.

The black drop effect is often mistakenly attributed to Venus' atmosphere. In fact, it is due to a combination of two effects: the image blurring that naturally takes place when a telescope is used (described technically as 'the point spread function'), and the drop in brightness of the Sun close to its edge (known as 'limb darkening').

Animation made from a series of observations of Venus in 2007, showing how the planet's appearance changes as it moves around the Sun. Credit: Andy Newsam

Safety:
Maps showing Venus's track across the Sun and locations where the transit is visible: