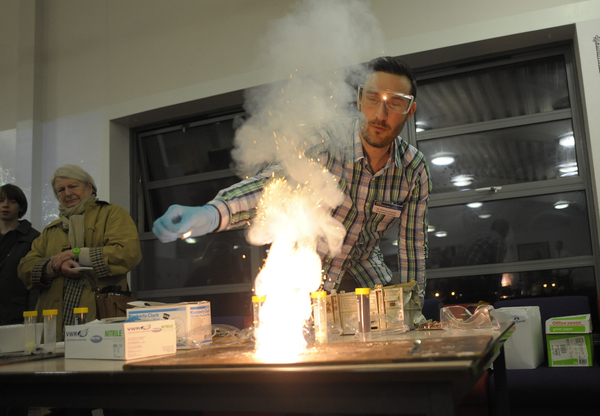 Outreach officer and teacher at Imperial College, London. My main role is to promote Physics and Astronomy to school pupils and the public, hopefully getting more people to study the subject. I also lecture, occasionally do some solar physics research and sometimes I'm on TV!

I absolutely love astronomy and solar physics, so it’s wonderful being able to talk about it with
people and see them getting the same joy out of the subject as I do. I also love working in a place
where scientific research is being conducted and being able to talk with my friends and colleagues
about the discoveries they are making.

Administration and emails! Unfortunately I have to write an awful lot of emails and also plan and
organise mine and other people’s work, which takes ages! For example a lecture might only last one
hour, but it could days to prepare and organise!

The great thing about studying at university is that you get the opportunity to try out so many
different sports and activities and this led to me learning Kung Fu and other martial arts. I’ve
continued this since university and I now study Tai Chi Chuan and it really helps me wind down after
work.

My family are always telling me to get a job in a bank because I’m good with numbers and it’ll earn
me lots of money. I was only the second person in my family to go to university (after my sister) and
was the first person to obtain a PhD. Therefore, all my family think I should go off and earn a fortune
in banking. However, it’s is something that I have absolutely no interest in and I much prefer earning
less money but actually enjoying my job! Doing something that actually has a positive and useful
outcome is really important to me.

I’m actually a very shy person, I have dyslexia, and before becoming a researcher I used to absolutely dread having to speak in public. Whilst my nerves have never gone away, through my job as a researcher and being required to give talks, I’ve been able to manage my anxiety about public speaking and I have given talks to over 1000 people!

When I was very young I was given a ‘My first Astronomy book’ and even though I couldn’t read it, I
remember looking at these amazing pictures of Astronauts, planets and galaxies and thinking ‘I want
to learn more about this’! Later, when as a child I found out that the Sun is just a star like all the
others in the night’s sky, it blew my mind! I thought it was brilliant that we had the opportunity to
study a star that was really close by! Another huge impact upon me was Helen Sharman becoming
the first Briton in space and she became one of my heroes! I always had a hope that I would become
and astronaut, but sadly due to my Asthma it couldn’t happen. However, my love of astronomy, led
to me studying Physics and Space Science at university and then studying for a PhD in Solar-
terrestrial physics and then to my current role.

As you can see, science wasn’t exactly my strong point! I was actually far better at languages, but they didn’t interest me! I got very lucky and was allowed to study Physics at A level, as normally you needed a B or above!

Again, I got a bit lucky and managed to secure a place at my first choice university to study Physics
and Space Science!

I somehow managed to scrape a 2:1 with an average of 60.4%. The cut off for a 2:1 was 60%!! I studied a wide variety of subjects from quantum physics to oceanography. I also undertook the complete astronautics course within the Department of Engineering, studying the science and key factors of satellite and rocket design.

In the final year of my degree, I undertook a project with an excellent Solar physicist, Prof Mike Lockwood and I was fortunate enough to secure a PhD studentship with him at the end of my degree. My research centred on long-term variations, mainly investigating sunspots, and how this may affect the Earth’s climate.

I worked as an environmental consultant, mainly helping international companies understand how
climate change will impact their operations and how they can adapt to these issues.

I taught GCSE Physics and Maths and A level Physics.

I currently work as the Outreach Officer for the Department of Physics. I do lots of different things in
my role such as going in to schools to give talks and run workshops about Physics and Astronomy,
running activities at Imperial College for school students, helping other researchers in the department talk about their research, helping with student recruitment across the College and I even get to do some research now and again!