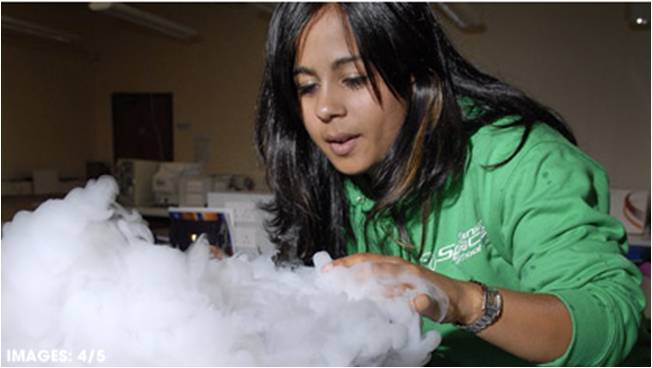 I come from a science background as my parents are pharmacists so I think I’ve always been quite interested in science, but I probably didn’t realise it until I was in secondary school. When I was 8 I wanted to be a vet or an inventor and remember dreaming of making prostheses for cats that’d lost limbs!

There were 2 things that lead me to have an interest in space. One was my physics teacher who told me, age 12, that I was naturally good at physics and that made me want to do it more (who doesn’t enjoy doing something they are good at?!) and the other was the Tom Hanks film Apollo 13. I saw it in the cinema and remember coming out, staring up at the moon and deciding then I wanted to go into space.

+ What are your main areas of interest?

I really enjoy planetary science because our Solar System is tangible, real and physical. It amazes me that we can see other bodies in the Solar System with the naked eye and it is such a feat of human talent and ingenuity that we have been able to visit these other worlds in person or with robots.

My PhD was about the magnetosphere of Saturn, using data from the Cassini spacecraft, and that really ignited my passion for the Solar System and everything it contains.

+ What triggered your choice of career?

The reason, as a teenager, I decided I wanted to do a PhD in astrophysics, was because I read a newspaper article about the astronaut Michael Foale. I want to be an astronaut and so I read about how he became an astronaut and his path included a PhD. That was how it all began!

+ What has been the biggest influence on your career?

My career path has been varied and winding and many things have influenced what I’ve done. One key thing is that I was always strongly supported (financially and emotionally) by my parents and family. This has meant that I’ve been able to take opportunities as they’ve come along and still feel confident in my choices. I’ve also been lucky enough that I could accept work experience and summer placements to gain more experience in the field without worrying about living expenses. I remember one summer my mum drove me to and from my work experience placement – meaning she did 120 miles in the car every day for 6 weeks just so I could learn more about being a space scientist!

The other thing that influenced my career and my career path was learning and realising what I enjoyed doing and what I was really good at.

During my PhD I knew I liked research but I also recognised that I delightedin science communication and outreach – it made me smile. Telling people about the ‘amazingness’ of space made me happier than actually doing the space research. Eventually it also dawned on me that perhaps the career path of an academic wasn’t for me (and I met some nice people and some not-so-nice people along the way who helped me decide that!).

Once I’d figured all that out it became quickly obvious what my dream job would entail - this!

+ Who is the most influential person you have met and why?

This is a really tough question because it depends if you mean influential generally, or to me! Of course, every single person I’ve ever met has influenced my life in some way! From my parents and my sister, to my husband, to friends, family and teachers, everyone leaves footprints on the heart! I’ve met a lot of people who are influential in astronomy and geophysics, but I couldn’t possibly pick just one!

+ Why should a young person, at school, spend time on astronomy or science?

Astronomy can get people enthused about science, and science is so important for everything in life! Science isn’t just about learning the bones of the body or the names of the elements, science teaches you how to enquire, how to investigate ideas, teamwork, report writing, practical skills, time management and problem solving! All these ‘life skills’ are way more important than parrot fashion learning (most of which you can just ‘google’ anyway) and that is why a young person must spend time doing science at school.

+ What’s your advice for an early-career astronomer/geophysicist?

Be proactive because unless you ask for something you can’t be told yes! I’ve send countless letters and emails out asking for things and sometimes nothing comes of them and sometimes I get a job offer or financial support or a new friend or colleague. Don’t be afraid to network and talk to people. If someone offers you a new opportunity say yes and make it work. Because every new skill is a notch on your belt and you never know when all these skills might all be needed together. When I was a teacher I was questioning my future path and my sister reminded me that every new skill I was learning will be useful one day. Now I use my teaching experiences daily.

And when things seem to be turning against you don’t panic! There have been many times I’ve been disappointed by rejections but you just don’t know what is around the corner. I was rejected from a job that I thought was amazing and I felt very dejected. A few weeks later the job advert for the RAS job came out and look what happened!

+ Where was the most exciting place you’ve worked and why?

As a research scientist all the places I’ve worked have been exciting! From the Mullard Space Science Laboratory which looks like X-mansion – you expect a fighter jet to suddenly appear from under the swimming pool (yes we did have a swimming pool!) to the Australian outback where I was using an array of radio telescopes to search for exoplanets (at the Narabri facitily of the ATNF) complete with kangaroos. I loved Jodrell Bank too because I got to sit in the dish although it had just been repainted and I got white paint on my top that still hasn’t come out. Finally, I love being at Burlington House. The building is beautiful, there is so much history associated with it, and it is right by the shopping mecca of the West End!

+ What is your greatest achievement so far, and why?

Academically? My PhD because I dreamt about getting one when I was 13 and I didn’t let ‘little me’ down! Also getting my teaching qualifications felt amazing because when I first started teaching it was so tough and the hardest thing I’ve done in my career but I managed to get through it with a smile on my face!

+ What was your proudest moment, and why?

I have so many! Getting married, passing my driving test and doing science comedy on stage makes me really proud of all the crazy things I’ve achieved. I also feel very proud when I hear about the successes of the young adults I’ve taught over the years. I remember them when they were little and now there are some off to Cambridge, some doing PhDs, some working for ESA….and I taught them all! Wow!

+ What was your biggest mistake?

Not asking questions because I thought they were silly. I got left behind because I was too scared to ask questions and I didn’t achieve what I could have at the time. Now I ask questions all the time – I’m like a child!

+ What is your scientific ambition?

I’d love to be an educator astronaut and inspire others to do science.

+ Do you have a favourite astronomical object/geological feature?

The planets and the moons and the other bodies in the Solar System, but especially the moons of Saturn.

My favourite geological feature has to be Iceland! I’ve recently visited and it was immense in its geological history and beauty. From the glaciers to the geysers to the black sand beaches I was awestruck. It helped that we saw aurora too!

(This was pre-baby!). A lie in and a snuggle with our cat Kenneth while watching breakfast TV. Brunch with the hubby and close friends. A hockey match in good weather, me scoring a few amazing goals for our victory. A walk along the beach in the sunshine. An afternoon nap and a silly film on the tele, watching it from the sofa under a duvet with popcorn. Cooking something exciting then tea with family. Maybe a trip to the pub in the evening for a glass of mulled wine and a pub quiz! You can see that food influences my life a lot!

I love travelling and every country I’ve been lucky enough to visit has wowed me in its own way. India is close to my heart, Peru is one of my favourites, Iceland was amazing, I loved Rome and going on a cruise in 2015. However, my dream destination would be the ISS – if I win the lottery!

I love making people laugh so I enjoy doing science comedy in pubs and theatres. It gives me a kick too, especially when things go wrong on stage! I enjoy playing hockey and the alto saxophone although I’ve not had much time for either recently. I love reading books and watching films or series and Game of Thrones is my current favourite. New hobbies include upcycling, knitting and interior ‘design’. I guess my favourite thing to do though is go out for a meal with the hubby, or stay in for a meal with the hubby! Eating is what I do for fun!

In 2020 it is the 200thanniversary of the RAS and we want to commemorate that by funding around 10 amazing outreach projects each with a whopping £100k! The ‘catch’ is that these projects have to be astronomy or geophysics related, have a form of legacy included in them and must reach audiences we’ve never worked with before. You’d think that because we are almost 200 years old we would have worked with everyone over the years but this simply isn’t the case!

RAS200 will achieve many things I think; spread the good word of astronomy and geophysics, show that the RAS are a forward facing and innovative organisation, broaden the diversity of people who take up STEMM subjects and have a lasting impact beyond 2020.

RAS200 is such an exciting project and I feel honoured to be able to be involved in it. The best bit about it is that the criteria for the outreach projects are non-prescriptive and very open. This will hopefully mean that the ideas are ‘out of this world’ and exhilarating, and that we reach audiences that we never dreamed of working with. I’ve already been lucky enough to network with groups as varied as the National Autistic Society, London Fostering Achievement, the John Muir Trust and Evangelical Christian Church International to name just a few. I’ve really enjoyed the town hall style meetings across the country as, whilst it involved a huge amount of travelling, it was fabulous to meet RAS fellows from far and wide and show everyone that we recognise that we are not a London organisation but an international one! And who knows, amidst all these people, there might be a budding new scientist or engineer out there who we might be able to reach and inspire using the powers of astronomy and geophysics.