Violent flaring revealed at the heart of a black hole system 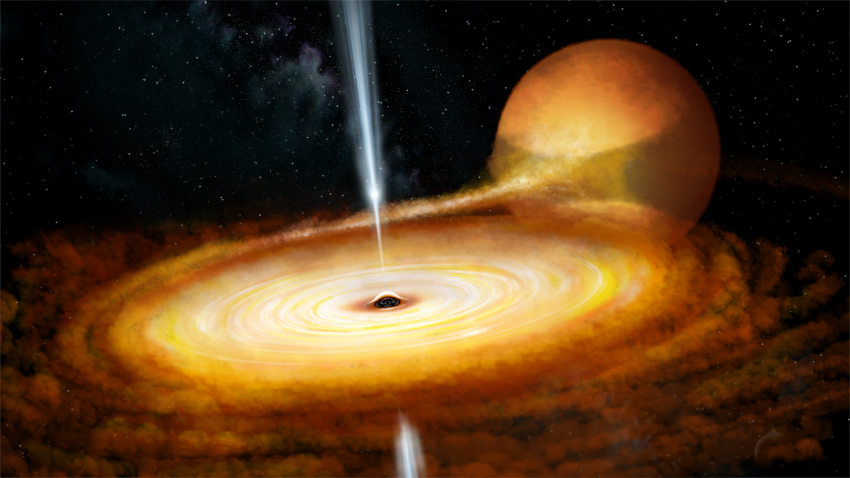 An artist's impression of the black hole system MAXI J1820+070, based upon observed characteristics. The black hole is seen to feed off the companion star, drawing the material out into a vast disc of inspiralling matter. As it falls closer to the black hole itself, some of that material is shot out into energetic pencil-beam 'jets' above and below the disc. The light here is intense enough to outshine the Sun a thousand times over. ©John Paice
Credit
©John Paice
Licence type
Attribution (CC BY 4.0)

An international team of astronomers, led by the University of Southampton, have used state-of-the-art cameras to create a high frame-rate movie of a growing black hole system at a level of detail never seen before. In the process they uncovered new clues to understanding the immediate surroundings of these enigmatic objects. The scientists publish their work in a new paper in Monthly Notices of the Royal Astronomical Society.

Black holes can feed off a nearby star and create vast accretion discs of material. Here, the effect of the black hole’s strong gravity and the material’s own magnetic field can cause rapidly changing levels of radiation to be emitted from the system as a whole.

This radiation was detected in visible light by the HiPERCAM instrument on the Gran Telescopio Canarias (La Palma, Canary Islands) and in X-rays by NASA's NICER observatory aboard the International Space Station.

The black hole system studied is named MAXI J1820+070, and was first discovered in early 2018. It is only about 10,000 light years away, in our own Milky Way. It has the mass of about 7 Suns, collapsed down to a region of space smaller than the City of London.

Investigating these systems is usually very difficult, as their distances make them too faint and too small to see - not even using the Event Horizon Telescope, which recently took a picture of the black hole at the centre of the galaxy M87. The HiPERCAM and NICER instruments however let the researchers record ‘movies’ of the changing light from the system at over three hundred frames per second, capturing violent ‘crackling’ and ‘flaring’ of visible and X-ray light.

John Paice, a graduate student at the University of Southampton and the Inter-University Centre for Astronomy & Astrophysics in India was the lead author of the study presenting these results, and also the artist who created the movie. He explained the work as follows: “The movie was made using real data, but slowed down to 1/10th of actual speed to allow the most rapid flares to be discerned by the human eye. We can see how the material around the black hole is so bright, it’s outshining the star that it is consuming, and the fastest flickers last only a few milliseconds – that’s the output of a hundred Suns and more being emitted in the blink of an eye!”

An animation of the black hole system MAXI J1820+070, based upon observed characteristics during a rapid accretion episode in March 2018. Purple denotes X-ray radiation seen by the NICER instrument on the ISS, and the rest of the colours show visible light seen by HiPERCAM in La Palma. The video is shown at roughly 1/10th of the true speed.

The black hole is seen to feed off the companion star, drawing the material out into a vast disc of inspiralling matter. As it falls closer to the black hole itself, some of that material is shot out into energetic pencil-beam 'jets' above and below the disc. The light here is intense enough to outshine the Sun a hundred times over can be seen to be crackling and shimmering from thousands of light years away.

The actual X-ray and visible light time-series data captured appears in graphs about halfway through. X-rays likely emerge from very close to the black hole, while the visible light comes from the inner parts of the jet, after a fraction-of-a-second delay.

The system is about 10,000 light years distant - too far away to resolve all the structure illustrated; but by looking at the different colours of the spectrum and how they relate to one another, we are able to 'peer in' and infer the structures of these enigmatic systems.

This video was created using Krita, GIMP, and PhotoMirage. With thanks to Rob Hynes' 'BinSim' software for help modelling the system.

Researchers also found that dips in X-ray levels are accompanied by a rise in visible light (and vice-versa). And the fastest flashes in visible light were found to emerge a fraction of a second after X-rays. Such patterns indirectly reveal the presence of distinct plasma, extremely hot material where electrons are stripped away from atoms, in structures deep in the embrace of the black hole’s gravity, otherwise too small to resolve.

This is not the first time this has been found; a split-second difference between X-ray and visual light has been seen in two other systems hosting black holes but it has never been observed at this level of detail. Members of this international team have been at the forefront of this field over the past decade. Dr Poshak Gandhi, also of Southampton, found the same fleeting time signatures in the two previous systems as well.

He commented on the significance of these findings: “The fact that we now see this in three systems strengthens the idea that it is a unifying characteristic of such growing black holes. If true, this must be telling us something fundamental about how plasma flows around black holes operate.

“Our best ideas invoke a deep connection between inspiralling and outflowing bits of the plasma. But these are extreme physical conditions that we cannot replicate in Earth laboratories, and we don’t understand how nature manages this. Such data will be crucial for homing in on the correct theory.”

John concluded with thoughts on the outlook for such work: “Time-domain astrophysics is a research area rife with the potential of discovery, as this study demonstrates. New systems like MAXI J1820+070 are discovered every year. Novel cameras like HiPERCAM and NICER are helping us to better understand these enigmatic cosmic objects better than ever before.”

University of Southampton / Inter-University Centre for Astronomy & Astrophysics in India

The University of Southampton drives original thinking, turns knowledge into action and impact, and creates solutions to the world’s challenges. We are among the top 100 institutions globally (QS World University Rankings 2019). Our academics are leaders in their fields, forging links with high-profile international businesses and organisations, and inspiring a 22,000-strong community of exceptional students, from over 135 countries worldwide. Through our high-quality education, the University helps students on a journey of discovery to realise their potential and join our global network of over 200,000 alumni.