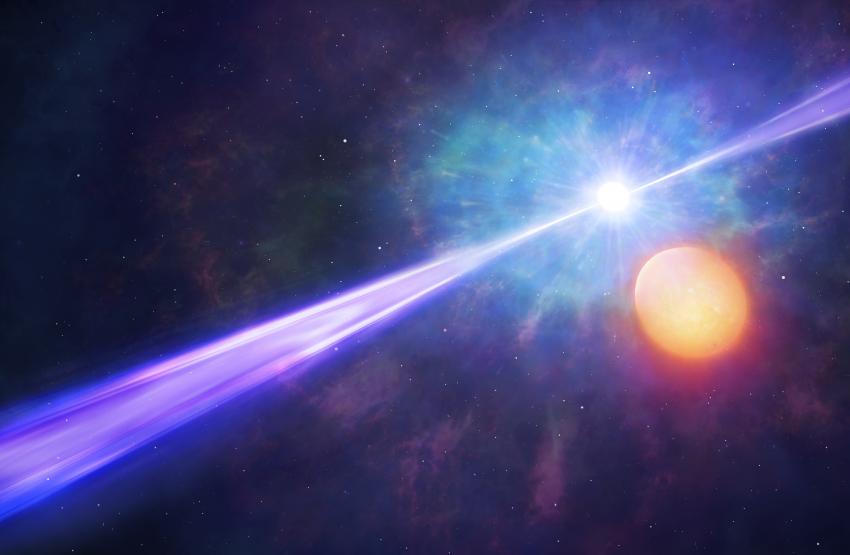 An artist’s impression of a gamma-ray burst with an orbiting binary star. (Image may be used, with credit, in connection with this story.)
Credit
University of Warwick / Mark Garlick
Licence type
All Rights Reserved

When it comes to the biggest and brightest explosions seen in the Universe, University of Warwick astronomers have found that it takes two stars to make a gamma-ray burst.

New research solves the mystery of how stars spin fast enough to create conditions to launch a jet of highly energetic material into space, and has found that tidal effects like those between the Moon and the Earth are the answer.

The discovery, reported in Monthly Notices of the Royal Astronomical Society, has been made using simulated models of thousands of binary star systems, that is, solar systems that have two stars orbiting one another.

A long gamma-ray burst (GRB), the type examined in this study, occurs when a massive star about ten times the size of our sun goes supernova, collapses into a neutron star or black hole and fires a relativistic jet of material into space. Instead of the star collapsing radially inwards, it flattens down into a disc to conserve angular momentum. As the material falls inwards, that angular momentum launches it in the form of a jet along the polar axis.

But in order to form that jet of material, the star has to be spinning fast enough to launch material along the axis. This presents a problem because stars usually lose any spin they acquire very quickly. By modelling the behaviour of these massive stars as they collapse, the researchers have been able to constrain the factors that cause a jet to be formed.

They found that the effects of tides from a close neighbour – the same effect that has the Moon and the Earth locked together in their spin - could be responsible for spinning these stars at the rate needed to create a gamma-ray burst.

Gamma-ray bursts are the most luminous events in the Universe and are observable from Earth when their jet of material is pointed directly at us. This means that we only see around 10-20% of the GRBs in our skies.

“The question has been how a star starts spinning, or maintains its spin over time. We found that the effect of a star’s tides on its partner is stopping them from slowing down and, in some cases, it is spinning them up. They are stealing rotational energy from their companion, a consequence of which is that they then drift closer together.

“What we have determined is that the majority of stars are spinning fast precisely because they’re in a binary system.”

The study uses a collection of binary stellar evolution models created by researchers from the University of Warwick and Dr J. J. Eldridge from the University of Auckland. Using a technique called binary population synthesis, the scientists are able to simulate this mechanism in a population of thousands of star systems and so identify the rare examples where an explosion of this type can occur.

Dr Elizabeth Stanway, from the University of Warwick Department of Physics, said: “Scientists haven’t modelled in detail for binary evolution in the past because it’s a very complex calculation to do. This work has considered a physical mechanism within those models that we haven’t examined before, that suggests that binaries can produce enough GRBs using this method to explain the number that we are observing.

“There has also been a big dilemma over the metallicity of stars that produce gamma-ray bursts. As astronomers, we measure the composition of stars and the dominant pathway for gamma-ray bursts requires very few iron atoms or other heavy elements in the stellar atmosphere. There’s been a puzzle over why we see a variety of compositions in the stars producing gamma-ray bursts, and this model offers an explanation.”

Ashley added: “This model allows us to predict what these systems should look like observationally in terms of their temperature and luminosity, and what the properties of the companion are likely to be. We are now interested in applying this analysis to explore different astrophysical transients, such as fast radio bursts, and can potentially model rarer events such as black holes spiralling into stars.”

The authors were supported through funding from the Science and Technology Facilities Council.