Small, hardy planets most likely to survive death of their stars 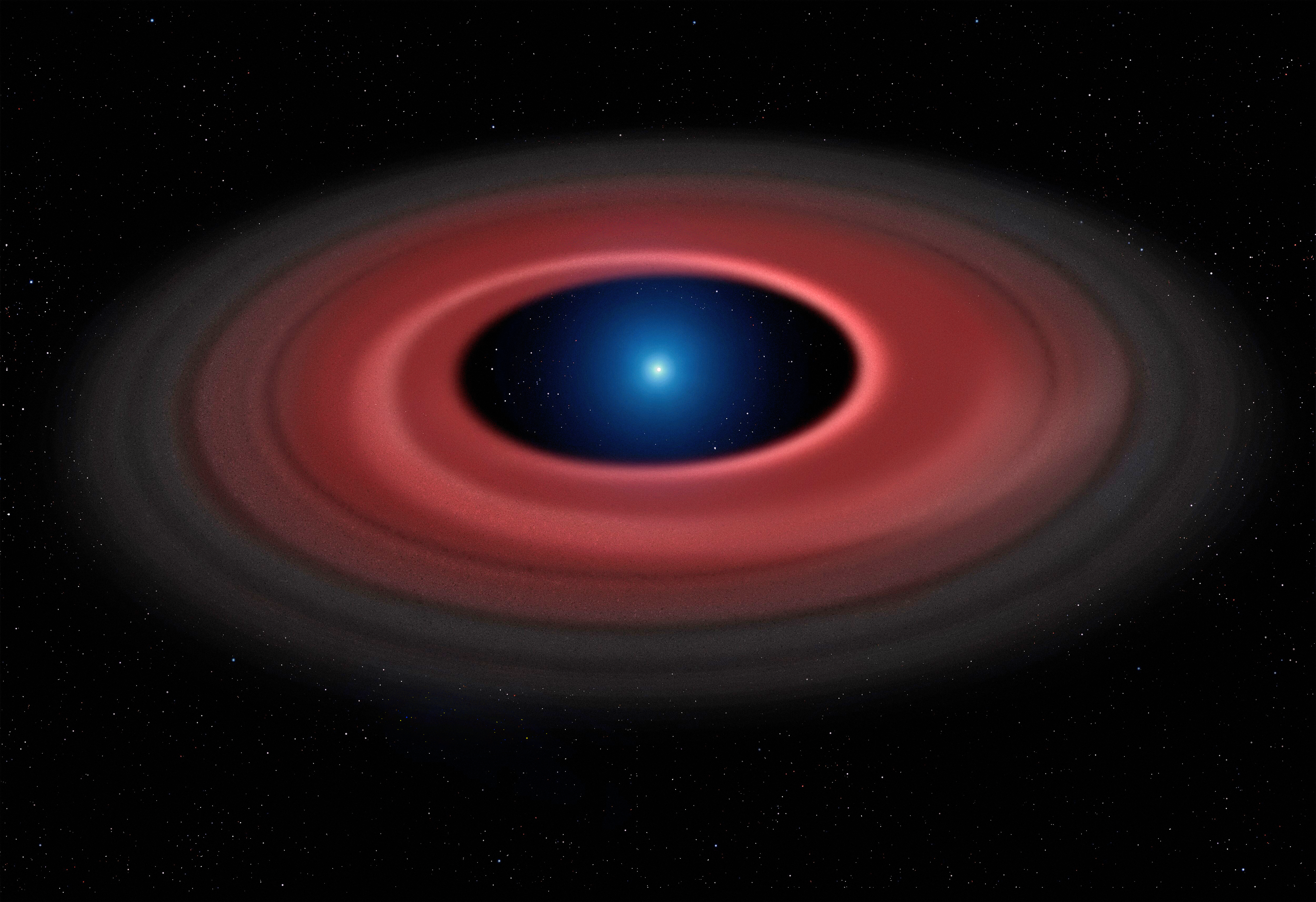 An asteroid torn apart by the strong gravity of a white dwarf has formed a ring of dust particles and debris orbiting the Earth-sized burnt out stellar core. Credit: University of Warwick / Mark Garlick

Small, hardy planets packed with dense elements have the best chance of avoiding being crushed and swallowed up when their host star dies, new research from the University of Warwick has found. The new research is published in the journal Monthly Notices of the Royal Astronomical Society.

Astrophysicists from the Warwick Astronomy and Astrophysics Group modelled the chances of different planets being destroyed by tidal forces when their host stars become white dwarfs and have determined the most significant factors that decide whether they avoid destruction.

Their ‘survival guide’ for exoplanets could help guide astronomers locate potential exoplanets around white dwarf stars, as a new generation of even more powerful telescopes is being developed to search for them.

Most stars like our own Sun will run out of fuel eventually and shrink and become white dwarfs. Some orbiting bodies that aren’t destroyed in the maelstrom caused when the star blasts away its outer layers will then be subjected to shifts in tidal forces as the star collapses and becomes super-dense. The gravitational forces exerted on any orbiting planets would be intense and would potentially drag them into new orbits, even pushing some further out in their solar systems.

By modelling the effects of a white dwarf’s change in gravity on orbiting rocky bodies, the researchers have determined the most likely factors that will cause a planet to move within the star’s ‘destruction radius’; the distance from the star where an object held together only by its own gravity will disintegrate due to tidal forces. Within the destruction radius a disc of debris from destroyed planets will form.

Although a planet's survival is dependent on many factors, the models reveal that the more massive the planet, the more likely that it will be destroyed through tidal interactions.

But destruction is not certain based on mass alone and depends partly on viscosity, a measure of resistance to deformation: low viscosity exo-Earths are easily swallowed even if they reside at separations within five times the distance between the centre of the white dwarf and its destruction radius. Saturn’s moon Enceladus – often described as a ‘dirty snowball’ - is a good example of a homogeneous very low viscosity planet.

High viscosity exo-Earths are easily swallowed only if they reside at distances within twice the separation between the centre of the white dwarf and its destruction radius. These planets would be composed entirely of a dense core of heavier elements, with a similar composition to the ‘heavy metal’ planet discovered by another team of University of Warwick astronomers recently. That planet has avoided engulfment because it is as small as an asteroid.

Dr Dimitri Veras, from the University of Warwick’s Department of Physics, said: “The paper is one of the first-ever dedicated studies investigating tidal effects between white dwarfs and planets. This type of modelling will have increasing relevance in upcoming years, when additional rocky bodies are likely to be discovered close to white dwarfs.”

“Our study, while sophisticated in several respects, only treats homogenous rocky planets that are consistent in their structure throughout. A multi-layer planet, like Earth, would be significantly more complicated to calculate but we are investigating the feasibility of doing so too.”

Distance from the star, like the planet’s mass, has a robust correlation with survival or engulfment. There will always be a safe distance from the star and this safe distance depends on many parameters. In general, a rocky homogenous planet which resides at a location from the white dwarf which is beyond about one-third of the distance between Mercury and the Sun is guaranteed to avoid being swallowed from tidal forces.

Dr Veras said: “Our study prompts astronomers to look for rocky planets close to - but just outside of - the destruction radius of the white dwarf. So far observations have focussed on this inner region, but our study demonstrates that rocky planets can survive tidal interactions with the white dwarf in a way which pushes the planets slightly outward.

“Astronomers should also look for geometric signatures in known debris discs. These signatures could be the result of gravitational perturbations from a planet which resides just outside of the destruction radius. In these cases, the discs would have been formed earlier by the crushing of asteroids which periodically approach and enter the destruction radius of the white dwarf.”

A copy of the paper can be found below.