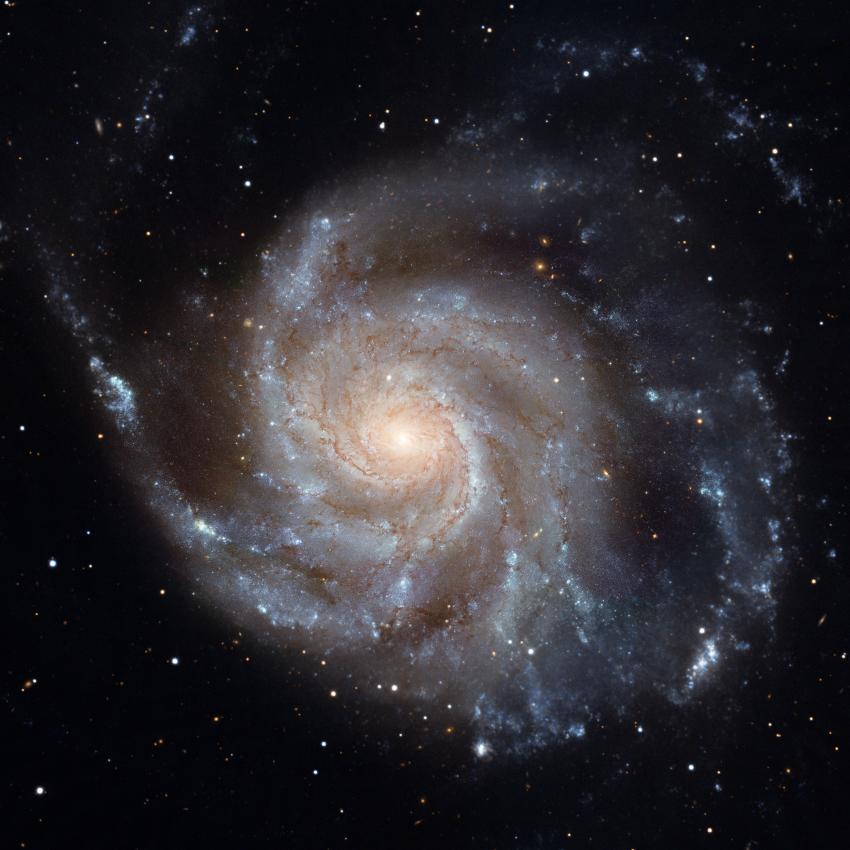 Hundreds of thousands of volunteers have helped to overturn almost a century of galaxy classification, in a new study using data from the longstanding Galaxy Zoo project. The new investigation, published in the journal Monthly Notices of the Royal Astronomical Society, uses classifications of over 6000 galaxies to reveal that “well known” correlations between different features are not found in this large and complete sample.

Almost 100 years ago, in 1927, astronomer Edwin Hubble wrote about the spiral galaxies he was observing at the time, and developed a model to classify galaxies by type and shape. Known as the “Hubble Tuning Fork” due to its shape, this model takes account of two main features: the size of the central region (known as the ‘bulge’), and how tightly wound any spiral arms are.

Hubble’s model soon became the authoritative method of classifying spiral galaxies, and is still used widely in astronomy textbooks to this day. His key observation was that galaxies with larger bulges tended to have more tightly wound spiral arms, lending vital support to the ‘density wave’ model of spiral arm formation.

Now though, in contradiction to Hubble’s model, the new work finds no significant correlation between the sizes of the galaxy bulges and how tightly wound the spirals are. This suggests that most spirals are not static density waves after all.

Galaxy Zoo Project Scientist and first author of the new work, Professor Karen Masters from Haverford College in the USA explains: “This non-detection was a big surprise, because this correlation is discussed in basically all astronomy textbooks – it forms the basis of the spiral sequence described by Hubble.”

Hubble was limited by the technology of the time, and could only observe the brightest nearby galaxies. The new work is based on a sample 15 times larger from the Galaxy Zoo project, where members of the public assess images of galaxies taken by telescopes around the world, identifying key features to help scientists to follow up and analyse in more detail.

“We always thought that the bulge size and winding of the spiral arms were connected”, says Masters. “The new results suggest otherwise, and that has a big impact on our understanding of how galaxies develop their structure.”

There are several proposed mechanisms for how spiral arms form in galaxies. One of the most popular is the density wave model - the idea that the arms are not fixed structures, but caused by ripples in the density of material in the disc of the galaxy. Stars move in and out of these ripples as they pass around the galaxy.

New models however suggest that some arms at least could be real structures, not just ripples. These may consist of collections of stars that are bound by each other’s gravity, and physically rotate together. This dynamic explanation for spiral arm formation is supported by state-of-the art computer models of spiral galaxies.

“It’s clear that there is still lots of work to do to understand these objects, and it’s great to have new eyes involved in the process”, adds Brooke Simmons, Deputy Project Scientist for the Galaxy Zoo project.

“These results demonstrate that, over 170 years after spiral structure was first observed in external galaxies, we still don’t fully understand what causes these beautiful features.” 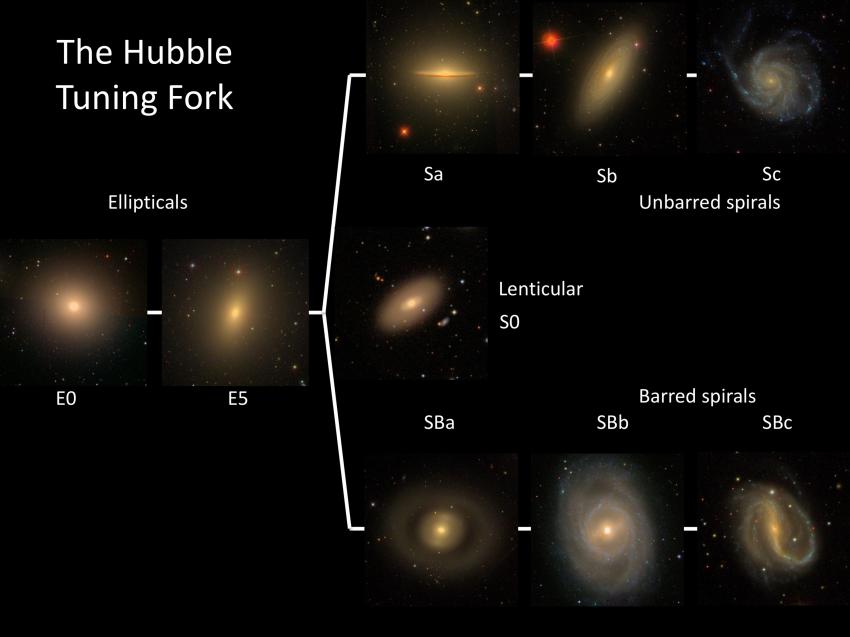 The Hubble Tuning Fork illustrated with images of nearby galaxies from the Sloan Digital Sky Survey (SDSS).

Galaxy Zoo is still collecting classifications of galaxies in a new generation of deeper images of the sky at www.galaxyzoo.org.

Galaxy Zoo is a collaboration between astronomers at the Universities of Lancaster, Portsmouth, Nottingham and Oxford in the UK, and at Haverford College, the Adler Planetarium and the Universities of Alabama and Minnesota in the United States. It was established in 2007.

Galaxy Zoo is part of the Zooniverse.org platform, development of which is funded by generous support, including a Global Impact Award from Google, and by a grant from the Alfred P. Sloan Foundation.

The Royal Astronomical Society (RAS, www.ras.ac.uk), founded in 1820, encourages and promotes the study of astronomy, solar-system science, geophysics and closely related branches of science. The RAS organises scientific meetings, publishes international research and review journals, recognises outstanding achievements by the award of medals and prizes, maintains an extensive library, supports education through grants and outreach activities and represents UK astronomy nationally and internationally. Its more than 4,000 members (Fellows), a third based overseas, include scientific researchers in universities, observatories and laboratories as well as historians of astronomy and others.