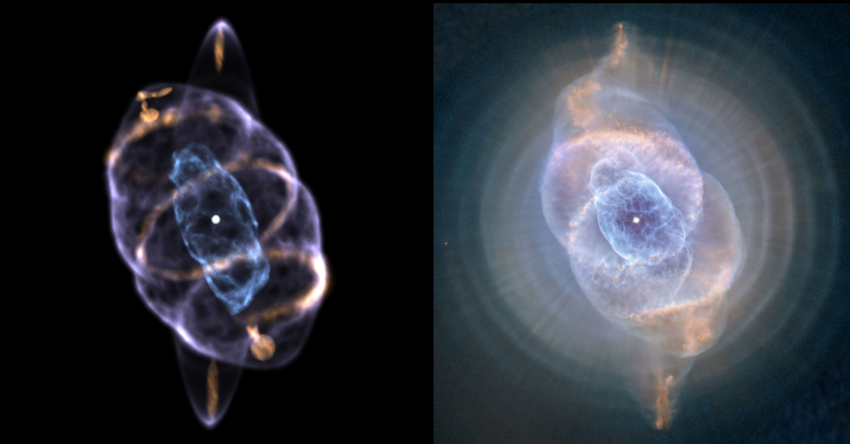 Researchers have created the first computer-generated three-dimensional model of the Cat's Eye Nebula, revealing a pair of symmetric rings encircling the nebula’s outer shell. The rings’ symmetry suggests they were formed by a precessing jet, providing strong evidence for a binary star at the centre of the nebula. The study was led by Ryan Clairmont, who recently completed secondary school in the United States, and is published in Monthly Notices of the Royal Astronomical Society.

A planetary nebula forms when a dying solar-mass star ejects its outer layer of gas, creating a colourful, shell-like structure distinctive to these objects. The Cat’s Eye Nebula, also known as NGC 6543, is one of the most complex planetary nebulae known. It is just over 3,000 light-years away from Earth, and can be seen in the constellation Draco. The Cat’s Eye Nebula has also been imaged by the Hubble Space Telescope in high resolution, revealing an intricate structure of knots, spherical shells, and arc-like filaments.

The nebula’s mysterious structure confounded astrophysicists because it could not be explained by previously accepted theories for planetary nebula formation. More recent research showed that precessing jets were potential shaping mechanisms in complex planetary nebulae such as NGC 6543, but lacked a detailed model.

Clairmont, an astronomy enthusiast, decided to try to establish the detailed 3D structure of the Cat’s Eye to find out more about the potential mechanism that gave it its intricate shape. To do this, he sought out the help of Dr Wolfgang Steffen of The National Autonomous University of Mexico and Nico Koning from the University of Calgary, who developed SHAPE, 3D astrophysical modelling software particularly suitable for planetary nebulae.

To reconstruct the nebula’s three-dimensional structure, the researchers used spectral data from the San Pedro Martir National Observatory in Mexico. These provide detailed information on the internal motion of material in the nebula. Together with these data and images from the Hubble Space Telescope, Clairmont constructed a novel 3D model, establishing that rings of high-density gas were wrapped around the outer shell of the Cat’s Eye. Surprisingly, the rings are almost perfectly symmetric to each other, suggesting they were formed by a jet – a stream of high-density gas ejected in opposite directions from the nebula’s central star.

The jet exhibited precession, similar to the wobbling motion of a spinning top. As the jet wobbled, or precessed, it outlined a circle, creating the rings around the Cat’s Eye. However, the data indicates the rings are only partial, meaning the precessing jet never completed a full 360-degree rotation, and that the emergence of the jets was only a short-lived phenomenon. The duration of outflows is an important piece of information for the theory of planetary nebulae. Since only binary stars can power a precessing jet in a planetary nebula, the team’s findings are strong evidence that a system of this type exists at the centre of the Cat’s Eye.

As the angle and direction of the jet changed over time, it likely formed all of the features seen in the Cat’s Eye, including the jets and knots. Using the three-dimensional model, the researchers were able to calculate the tilt and opening angle of the precessing jet based on the orientation of the rings.

Ryan Clairmont, the lead author of the paper and now a prospective undergraduate at Stanford University, says “When I first saw the Cat’s Eye Nebula, I was astounded by its beautiful, perfectly symmetric structure. I was even more surprised that its 3D structure was not fully understood.”

He adds, “It was very rewarding to be able to do astrophysical research of my own that actually has an impact in the field. Precessing jets in planetary nebulae are relatively rare, so it’s important to understand how they contribute to the shaping of more complex systems like the Cat’s Eye. Ultimately, understanding how they form provides insight into the eventual fate of our Sun, which will itself one day become a planetary nebula.”

By establishing the detailed three-dimensional structure of the Cat's Eye Nebula, Clairmont won First Place in the category of physics and astronomy at the International Science and Engineering Fair (ISEF), the largest science competition for secondary school students in the world.