Venus and the Pleiades 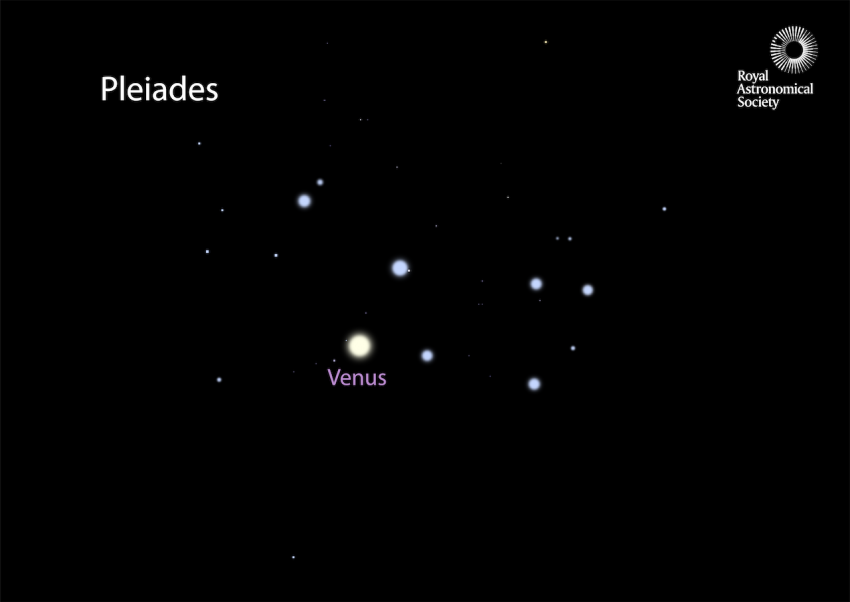 On 3 April 2020 the planet Venus will be in front of the Pleiades star cluster.
Credit
RAS
Licence type
Attribution (CC BY 4.0)

Skywatchers can see an unusual sight in the evening of 3 April: the planet Venus in front of the Pleiades star cluster.

From around 2030 BST, Venus should be very easy to spot in the darkening twilight sky. The planet is about the size of the Earth, and its thick carbon dioxide atmosphere reflects about 75% of the sunlight that falls on it. It's also the closest planet to the Earth, tonight around 95 million kilometres away, so is usually the next brightest object in the night sky after the Moon.

As the sky darkens, the Pleiades cluster should become visible too. This is a grouping of around 1,000 stars at a distance of 444 light-years from the solar system (so more than 100 million times as far away as Venus). Six or seven of these are visible to the unaided eye - so the cluster is often called the 'seven sisters' too.

Although the planet and the star cluster are easy to see with the eye, binoculars give a much better view, even from an urban location. A smartphone with a good camera should also capture both fairly easily, at least with a long exposure with the camera held steady on a wall.

If you do take a picture then tweet us and we'll try to share a selection of the best images in the next few days.