The UK team of 5 secondary level students have all gained medals in a fierce competition at this year's International Olympiad on Astronomy and Astrophysics (IOAA) in Hungary. The results were the best since the UK entered the competition in 2015.

The 13th International Olympiad on Astronomy and Astrophysics (IOAA) was held over 8 days from 2 to 10 August. It is an annual competition at the highest level for secondary school students (who have to be under 20 years at the start of the competition). Teams of 5 students and 2 team leaders enter, with this year's field consisting of 254 students representing teams from 47 countries.

This year's UK medal tally of one Gold, three Silver and one Bronze medal put the UK in joint 5th place behind Russia, China, USA and Romania. The team was led by two Fellows of the Royal Astronomical Society.

Selection for the UK team (British Astronomy and Astrophysics Olympiad (BAAO) team) takes place via a number of competition papers, sat in schools, in the preceding year, until the final team of 5 (and a reserve) are chosen at a training camp in Oxford. The questions are aimed at years 12 and 13, but the timing of the actual Olympiad tends to affect which year group can actually compete.

The UK first entered 3 students in 2015 in Indonesia, winning 2 Silver medals. In 2016 the full team of 5 won a gold, a silver and a bronze medal in India (ranking the UK 6th out of 42 countries competing) and in 2017 the team won one silver and 3 bronze medals in Thailand. Next year's event, the 14th IOAA, will take place in Bogota, Colombia. 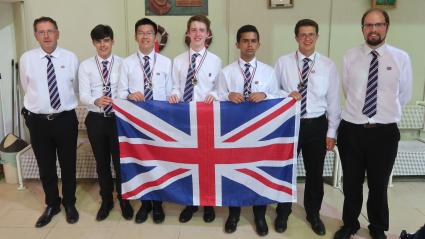