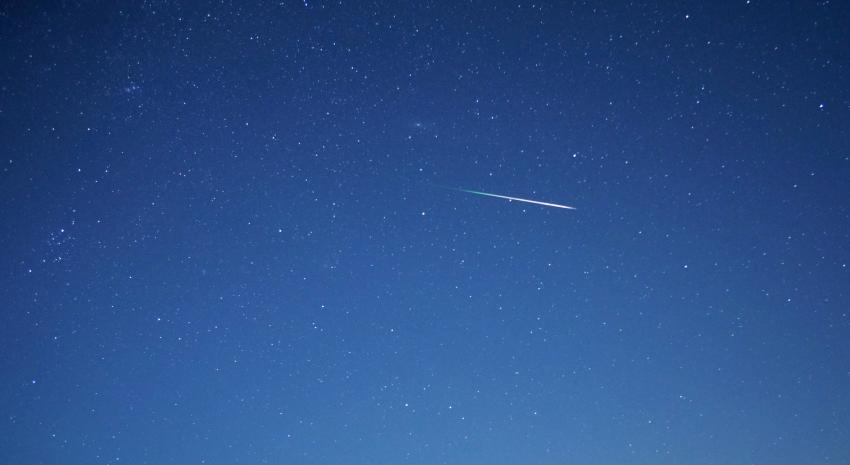 A Perseid meteor in the same frame as the galaxy M31, in an image by astrophotographer Paul Sutherland. The stars of the constellation Perseus are on the left.
Credit
Paul Sutherland / Skymania.com
Licence type
Attribution (CC BY 4.0)

The Perseid meteor shower reaches its peak on the night of 12-13 August in the UK and Europe, giving skywatchers a potentially impressive summer treat. The meteors are best viewed from the northern hemisphere, and in ideal conditions with no clouds observers could see up to 50 an hour.

Meteors are the result of small particles entering the Earth’s atmosphere at high speed, typically around 60 km per second. The pieces of debris heat up due to friction with the air, and are usually destroyed in under a second at altitudes above 80 km. The superheated air around the meteor glows briefly, and is visible from the ground as a streak of light known as a ‘shooting star’.

Throughout the year up to six random ‘sporadic’ meteors are visible each hour. During a shower, the Earth passes through a cloud of debris left behind by comets, and so many more meteors are seen entering the atmosphere. The Perseids are associated with Comet 109/P Swift-Tuttle, which last passed near the Earth in 1992. The shower meteors are named for the point in the sky where they appear to originate – the so-called ‘radiant’ – located in the constellation of Perseus. 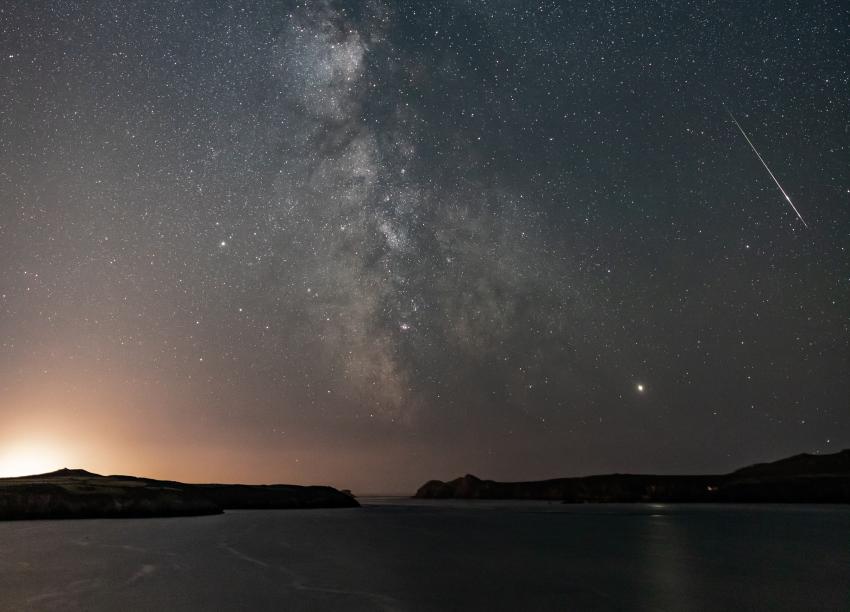 A cropped image of a Perseid meteor above Pembrokeshire in Wales in 2019, by astrophotographer Allan Trow. The meteor is visible on the right, and the band of the Milky Way is visible in the centre.
Allan Trow / Dark Sky Wales
Licence type
Attribution (CC BY 4.0)

This year the peak should be from the evening of 12 August through to the morning of 13 August. On this night the Moon will be a thin crescent setting early in the evening, so moonlight will not interfere, and there is a real advantage to being in a dark sky site away from the lights of towns and cities.

In the evening the radiant is lower in the sky, so fewer meteors are seen. Those that do appear are ‘Earthgrazers’, where the incoming debris particles just skim the top of the Earth’s atmosphere and can leave long bright trails. Later on in the night numbers increase as the radiant rises higher in the sky, with the best view likely to be before 03:00 BST, when the sky will start to brighten before dawn.

Unlike many astronomical events, meteor showers are easy to watch and no special equipment is needed. A meteor shower is best observed with the naked eye, and a reclining chair and a blanket make viewing much more comfortable. If clouds do make viewing impossible on the peak night itself, the shower will continue for a few more days with reduced activity.