Space weather will delay your trains 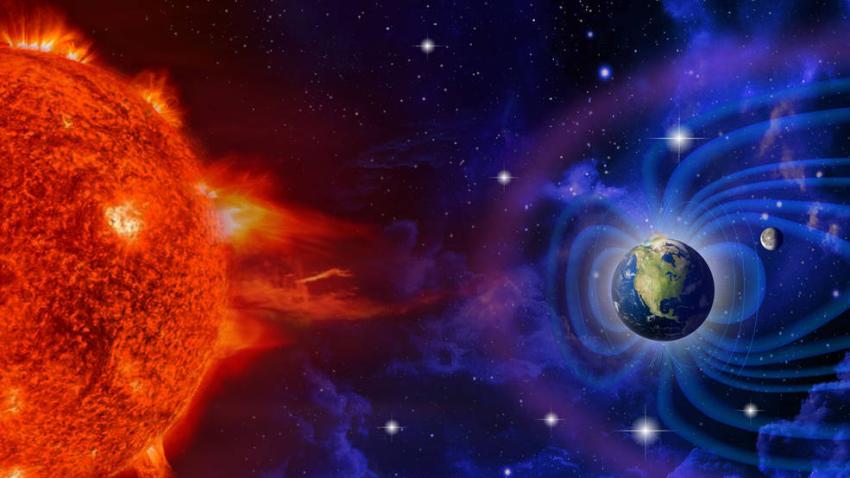 Fluctuations in space weather are disrupting train signals and causing significant delays. A project investigating the effect of solar storms on railway signals will be presented this week at the National Astronomy Meeting (NAM 2022) by Cameron Patterson, a PhD student at Lancaster University.

The sun’s tendency to affect technology on Earth, as well as in space, is known as space weather. In railways, electric currents caused to flow in the earth by solar activity can interfere with the normal operation of signals, turning green signals to red even when there is no train nearby.

Patterson says: “Most of us have at one point heard the dreaded words: ‘your train is delayed due to a signalling failure’, and while we usually connect these faults to rain, snow and leaves on the line, you may not have considered that the Sun can also cause railway signals to malfunction.”

To track the location of trains, a railway line is split into small, consecutive segments called ‘blocks’ with an average length of 1-2 km. Each block is tied to a signal that tells you if there is a train currently in that block. The signals are controlled by relays which detect currents in the system. Synonymous to traffic lights, the signals turn green if the block is empty and a current is detected, or red if the block is occupied and no current is detected.

Solar storms can off-set the balance of currents controlling the light signals on train lines, causing lights to show clear sections as occupied with a red light. Evidence shows that stronger solar storms cause more signals to malfunction, thus increasing the amount time the train is delayed.

A team of researchers at the University of Lancaster have modelled the impacts of solar storms on two segments of the UK railway network: a South-North line from Preston to Lancaster and a West-East line from Glasgow to Edinburgh.

Technological problems can occur as a result of solar storms with a range of strengths: from medium storms with electric field strengths of 2V/km to strong storms at 4V/km. In the past, values of higher than 7 V/km have been detected along railways in Sweden. Estimates of extreme solar storms have predicted events with strengths of up to 20 V/km.

Interestingly, the results suggest that signalling failures can occur even with moderate storms. So, while these estimates are unsettling, there is still cause for concern without these extreme storms.

Describing the future of his work, Patterson says: “We are now working on looking at the case where trains are present on the line, and how strong a storm needs to be to turn a red signal back to green - a far more hazardous scenario potentially leading to crashes!”

Image link: https://nam2022.org/images/helio_teams_bkgrd_5_3.jpg
Caption:An illustration of the Sun interacting with Earth’s magnetosphere.
Credit: NASA's Goddard Space Flight Center/Mary Pat Hrybyk-Keith
Image link: https://nam2022.org/images/2.png
Caption: A geographic map of part of the United Kingdom showing railway lines being studied. The top line (blue) is the Glasgow to Edinburgh line, stretching in an west-east orientation; the bottom line (red) is a portion of the West Coast Main Line from Preston to Lancaster, with the extension beyond those sections displayed opaquely, stretching in a south-north orientation. The location of railway signals are shown as dots.
Credit: C. J. Patterson, “Geographic map of UK railway lines with signal locations”, 2022