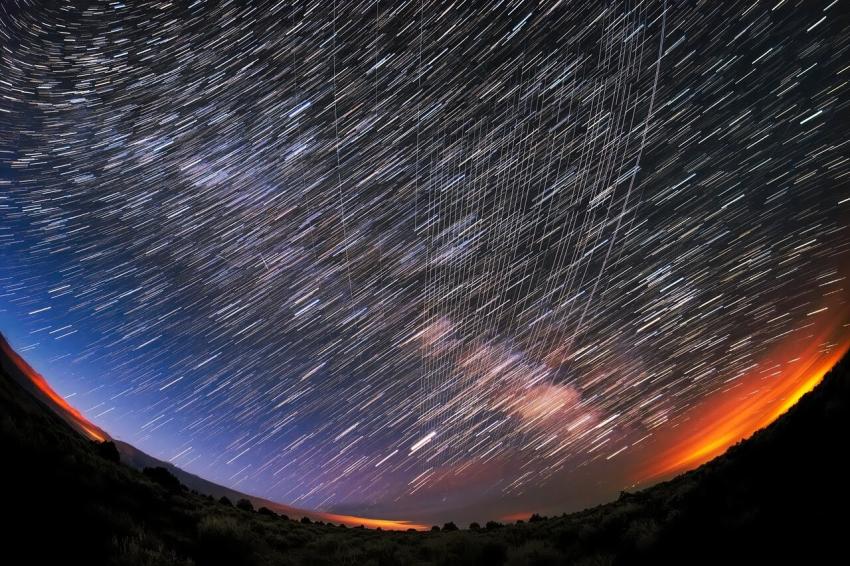 The Royal Astronomical Society welcomes the establishment of the new International Astronomical Union (IAU) Centre for the Protection of Dark and Quiet Skies from Satellite Constellation Interference. The Centre will be jointly hosted by the Square Kilometre Array Organisation (SKAO), headquartered in the UK, and the National Optical-Infrared Astronomy Research Laboratory (NOIRLab) in the United States. It will focus on the effect of large satellite constellations on both optical and radio astronomy, and seek ways to minimise their impact through design changes, policy measures and mitigation through astronomical software. The RAS is one of a number of contributing astronomy organisations, pledged to give in-kind support to the work of the new Centre.

In 2019 SpaceX launched the first satellites making up the Starlink constellation, the beginning of the deployment by different companies of what is expected to be as many as 100,000 spacecraft operating in Low Earth Orbit by the end of this decade. SpaceX and the part-UK owned company OneWeb already have nearly 2,300 satellites in operation, doubling the number in Low Earth Orbit in just two and a half years.

The new constellations are already affecting optical and radio astronomy. By design the satellites provide coverage to the whole Earth, so unlike light pollution and radio interference on the ground, it is impossible to escape their effects through relocation to remote sites. The most obvious impact is the appearance of many more trails across images made with optical observatories, both on the ground and in space, which require time consuming and expensive mitigation with software or repeat observations, and in some cases render data useless. Observations of short-lived phenomena often simply cannot be repeated.

In radio astronomy, downlink signals from satellite constellations are up to 10 trillion times as powerful as the signals from astronomical sources. Compensating for this is a major challenge for facilities in the UK and around the world, such as the e-MERLIN interferometer centred on Jodrell Bank in Cheshire, and the Square Kilometer Array under construction in Australia and southern Africa.

Along with the impact on professional astronomy, by 2030 hundreds or even thousands of satellites are expected to be visible to the naked eye in dark sky settings, particularly in the summer months, at higher latitudes, and at the beginning and the end of the night. The RAS believes that the wider impact on this natural environment, a cornerstone of human culture, should also be minimised.

In 2019 the RAS joined the global effort to raise awareness of the threat to astronomy from large satellite constellations, creating working groups comprised of astronomers from different facilities, representatives from UK funding bodies, and industry specialists. The Society is arguing for changes to the space licensing regime that ensure our science is protected, at a national and global level, and strongly supported the creation of the new IAU centre.

RAS Deputy Executive Director Dr Robert Massey leads the Society’s work in this area. He said: “We’re delighted to be contributing to the work of the new IAU centre and its mission to preserve the science of astronomy. It’s important to protect our view of the night sky so that future generations continue to be inspired by looking up at the stars.”

The RAS will join with other contributing organisations around the world to liaise with the Centre team before it formally begins its work this April.