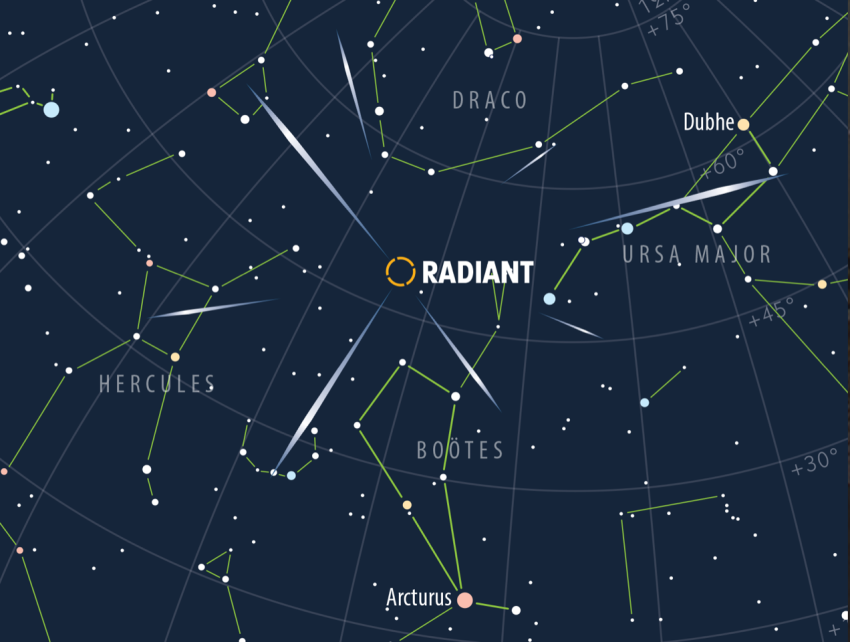 Northern hemisphere stargazers can look forward to what could be 2022’s best meteor shower on 3-4 January. Observers enjoying dark skies could see 50 or more meteors an hour that night, as the Quadrantids shower reaches its peak.

Meteors are the result of small particles entering the Earth’s atmosphere at high speed, typically around 40 km per second for the Quadrantids. The pieces of debris heat up due to friction with the air, and are usually destroyed in under a second at altitudes above 80 km. The superheated air around the meteor glows briefly, and is visible from the ground as a streak of light known as a ‘shooting star’.

Throughout the year between six and ten random ‘sporadic’ meteors are visible each hour. During a shower, the Earth passes through a cloud of debris left behind by comets and asteroids, and so many more meteors are seen entering the atmosphere. The Quadrantids are associated with the near-Earth asteroid (196256) 2003 EH1, which may be an extinct comet seen by Chinese astronomers in 1490.

Meteor showers appear to emanate from a radiant point, in this case named for the defunct constellation Quadrans Muralis, and now sited in the constellation Bootes, near the famous Plough asterism. The diagram below, courtesy of Astronomy Now, depicts the radiant of the shower.

This year the shower peak is predicted to be at 20:40 GMT on 3 January. This is quite sharply defined, and the number of meteors drops off by 50% two hours later. To offset this, more meteors tend to be seen when the radiant is higher in the sky, and also in the hours before dawn, so UK observers could see a decent display throughout the night.

This time the Moon will be just past New, so will its light will not interfere with the view and there will be a real benefit from watching the meteor shower under dark skies away from the lights of towns and cities.

Unlike many astronomical events, meteor showers are easy to watch and no special equipment is needed. A meteor shower is best observed with the naked eye, and a reclining chair, a warm blanket and a hot drink make viewing much more comfortable on a cold January night.