A New Method to Detect Exoplanets 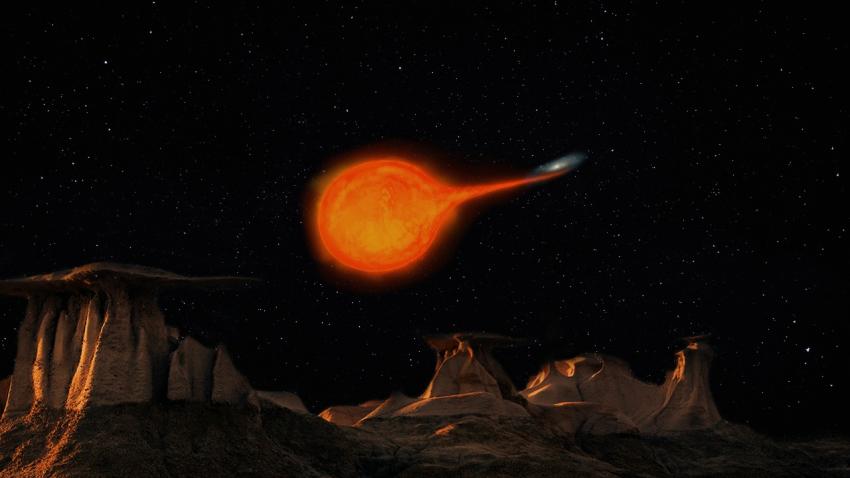 In recent years, a large number of exoplanets have been found around single ‘normal’ stars. New research shows that there may be exceptions to this trend. Researchers from the Autonomous University of Nuevo León (UANL), the National Autonomous University of Mexico (UNAM), and New York University Abu Dhabi suggest a new way of detecting dim bodies, including planets, orbiting exotic binary stars known as Cataclysmic Variables (CVs).

CVs are binary star systems in which the two stars are in extremely close proximity to each other; so close that the less massive object transfers mass to the more massive. CVs are typically formed of a small, cool type of star known as a red dwarf star, and a hot, dense star – a white dwarf. Red dwarf stars have a mass between 0.07 and 0.30 solar masses and a radius of around 20% of the Sun’s, while white dwarf stars have a typical mass of around 0.75 Solar masses and a very small radius similar to that of planet Earth.

In the CV system, the transfer of matter from the small star forms an accretion disk around the compact, more massive star. The brightness of a CV system mainly comes from this disk, and overpowers the light coming from the two stars. A third dim body orbiting a CV can influence the mass transfer rate between the two stars, and hence the brightness of the entire system. The method described in the new work is based on the change of brightness in the accretion disk due to perturbations of the third body that orbits around the inner two stars.

In their research, team leader Dr Carlos Chavez and his collaborators have estimated the mass and distance of a third body orbiting four different CVs using the changes in the brightness of each system. According to calculations carried out by the team, such brightness variations have very long periods in comparison to the orbital periods in the triple system. Two out of the four CVs appear to have bodies resembling planets in orbit around them.

Dr Chavez comments on the new findings, “Our work has proven that a third body can perturb a cataclysmic variable in such a way that can induce changes in brightness in the system. These perturbations can explain both the very long periods that have been observed - between 42 and 265 days- and the amplitude of those changes in brightness.” He adds, “Of the four systems we studied, our observations suggest that two of the four have objects of planetary mass in orbit around them.”

The scientists believe that this is a promising new technique for finding planets in orbit around binary star systems, adding to the thousands already found in the last three decades.