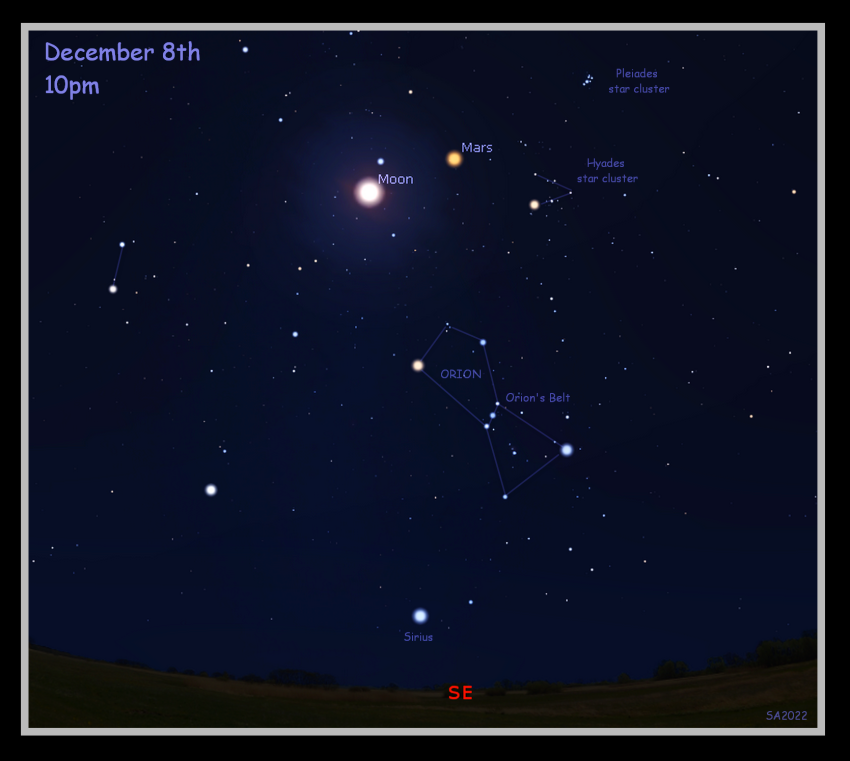 In the first part of December northern hemisphere observers will enjoy their best view of Mars until the 2030s. The red planet will be high in UK skies and will appear brighter than any star.

Mars is often described as the solar system planet most like the Earth, with desert like landscapes, extinct volcanoes, water frozen in polar ice caps, and evidence of long disappeared seas and floods.

Today the fourth planet from the Sun is a cold and harsh world, with a thin carbon dioxide atmosphere, summer temperatures that reach a maximum of 20 Celsius, and winters at the poles that plunge to -130 Celsius. Despite this Mars continues to fascinate astronomers and planetary scientists, who see it as one of the places in the solar system where life might have emerged, and might just still be present.

Mars is only half as big as the Earth, and comes close to us only every 26 months. Those times are when Mars is opposite the Sun in the sky, in so-called oppositions, and offer the best prospects for ground-based stargazers to see the planet.

This year opposition is on 8 December, and throughout the month Mars will be a little over 81 million kilometres away. Mars will be at a visual magnitude of -1.9, making it brighter than any star apart from the Sun, and will be unmistakeable in front of the stars of Taurus, from the UK above the familiar winter pattern of Orion.

The elliptical orbit of Mars means some oppositions are better than others, and for the rest of this decade the planet will be further away than it is this month. It will not be closer to the Earth until 2033, and it will be 2037 before the planet is as well placed in UK skies.

Through a telescope Mars will have a disk 17 arc seconds in diameter (1 arc second is 1/3600th of a degree). This is still quite small, but with patience careful observers will be able to see the polar ice caps and dark markings on its surface.

On 8 December there is an added spectacle, when the Moon will move in front of the planet. From London Mars will be in the western sky when the Moon starts to cover it at around 0458 GMT, and the planet will reappear at 0559 GMT (times vary with location). This is an excellent opportunity for astrophotographers to capture images of the red disk of Mars next to the lunar surface.

At the moment Mars is also being studied by a flotilla of spacecraft. NASA, the European Space Agency, the Chinese Space Agency and the United Arab Emirates have spacecraft studying the planet from orbit, rovers driving around its surface and even the first helicopter making short flights in Martian skies.

A guide to finding Mars in the night sky this December. Credit: Royal Astronomical Society