The European Space Agency (ESA) today released the largest dataset yet from the Gaia satellite, an orbiting observatory mapping the Milky Way.

Launched in 2013, Gaia is mapping our Galaxy in unprecedented detail. The latest release includes high accuracy positions for almost 1.7 billion stars, 600 times the number in the satellite’s first dataset, and far in excess of anything achieved before.

‘Gaia is the culmination of efforts to map the Galaxy since the dawn of telescopic astronomy. In 1609 Galileo observed that the Milky Way, which appears as a band of light in the night sky, was composed of a vast number of individual stars. Astronomers later realised this is the view of the galaxy we live in from our home here on Earth.’

‘Our founding president, Sir William Herschel, also attempted to map the Galaxy more than two centuries ago, and would have been delighted by today’s results.’

‘It gives me enormous pleasure to congratulate the scientists and engineers who work on Gaia, based in many different European countries including the UK, for their continuing achievement. This mission is measuring the Universe in a way we could not have imagined even a few decades ago.’

The data release was announced at a briefing at the Royal Astronomical Society this morning. By the end of its life in 2024, Gaia is expected to have surveyed up to a tenth of all the stars in our Galaxy, and the data from this release will provide astronomers around the world with a rich source of material for many years to come. 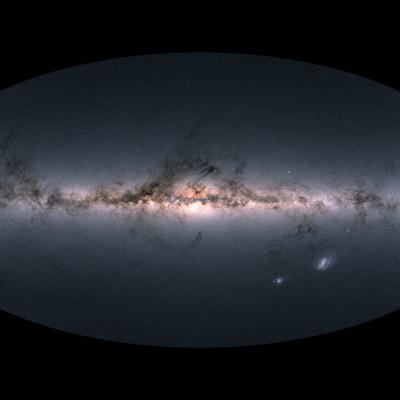 Gaia’s all-sky view of our Milky Way Galaxy and neighbouring galaxies, based on measurements of nearly 1.7 billion stars. The map shows the total brightness and colour of stars observed by the ESA satellite in each portion of the sky between July 2014 and May 2016. 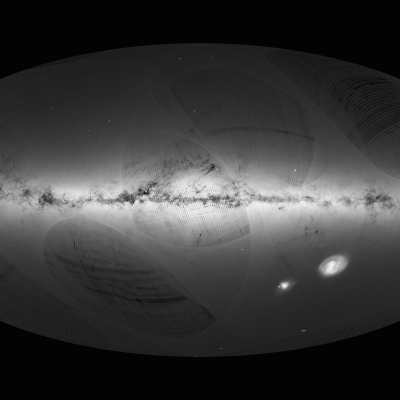 An all-sky view of stars in our Galaxy and neighbouring galaxies, based on the first year of observations from ESA’s Gaia satellite, from July 2014 to September 2015.