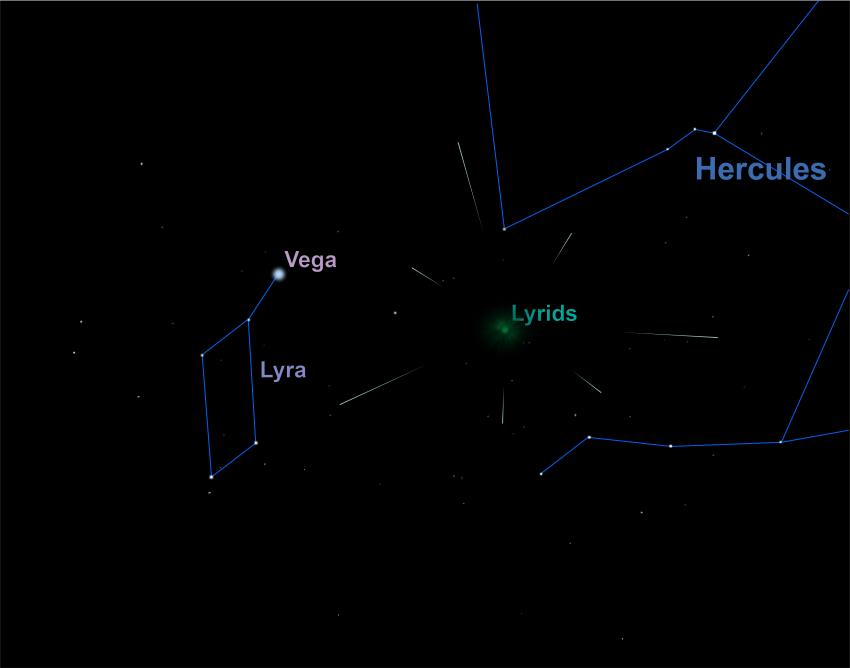 The radiant of the Lyrids meteor shower, in the constellation of Lyra.
Credit
RAS
Licence type
Attribution (CC BY 4.0)

The 21 and 22 of April is the peak of a shower of meteors – or shooting stars – known as the Lyrids.

All the time small pieces of interplanetary debris – meteoroids – burn up in the Earth’s atmosphere. Most of them are very small, around the size of a grain of sand, but they enter the atmosphere at anything from 10 to 70 kilometres each second, or up to 250,000 kilometres an hour.

At this speed even such tiny particles quickly heat up and are destroyed as they run into the air around our planet. The air around them glows briefly as a streak of light, which is then seen as a meteor from the ground.

On any clear night a few random meteors called ‘sporadics’ are visible each hour. But at certain times of year there are also showers of meteors, where activity is enhanced. The second half of April sees the Lyrid meteor shower.

The Lyrids come from the tail of Comet Thatcher, which last came close to the Sun in 1861. This comet takes more than 400 years to complete its orbit, so will next be close to the Earth in the 23rd century.

Like all comets, Thatcher leaves a stream of debris in its wake. When the Earth runs into that material, some of it burns up in our atmosphere – meaning we see more meteors than usual.

The way we intercept the trail of material also means that the meteors appear to come from a point in the sky – the radiant – in the constellation of Lyra, so are called the Lyrids.

This year the Lyrids peak on the night of 21-22 April. The best view should be around 0300 local time, when the radiant is high overhead in the northern hemisphere.

Observers with a good dark sky might see around 10 Lyrid meteors each hour, on top of the sporadics. The shower tends to produce quite bright meteors, which makes things a bit easier in towns and cities, and there’s also no Moon visible to interfere with the view.

Meteor showers are easy to observe. Unlike many astronomical phenomena, a telescope or pair of binoculars actually make it much harder to see meteors. The best way to watch them is simply with your eyes, as you can see a large area of sky at once.

More information on the Lyrids from the International Meteor Organisation.