James Webb Space Telescope is on its way! 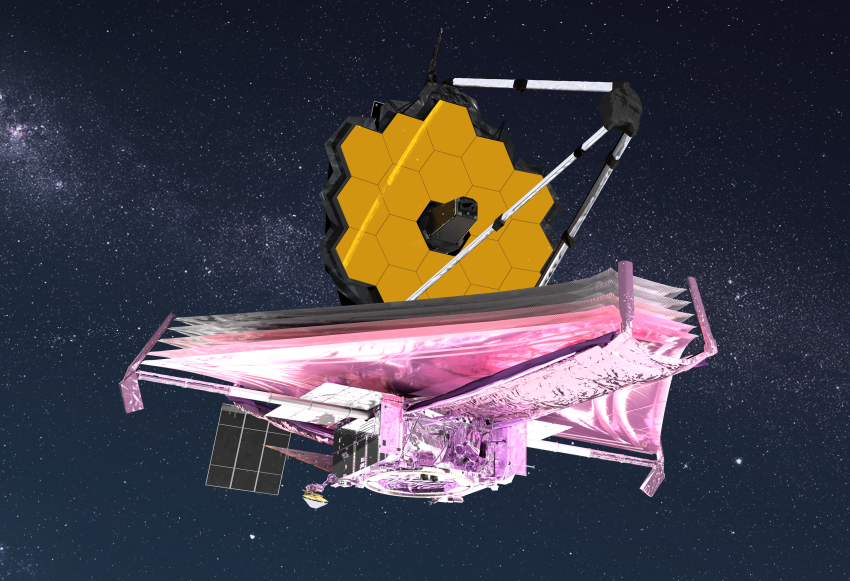 Today saw the successful launch of the James Webb Space Telescope (JWST) from the Kourou spaceport in French Guiana, atop an Ariane 5 rocket. The culmination of more than three decades of work, JWST is seen as the successor to the Hubble Space Telescope, and will observe the universe in infrared light.

The Telescope is designed to answer some of the big questions in astronomy. It will detect light from objects at a huge distance, meaning we see them as they were not long after the universe began. A key ambition of JWST is to act as a kind of time machine, giving us a view of the first stars and galaxies as they were born.

Infrared light travels through dust that obscures objects in visible light, so JWST will also be able to look inside regions where stars and planetary systems are forming in the present day. It will study extrasolar planetary atmospheres to assist astronomers in the search for signs of life elsewhere. In addition, JWST will study the planets within our own solar system, furthering our knowledge of our own cosmic backyard.

The Telescope is a NASA / European Space Agency / Canadian Space Agency mission, with a total of 20 participating countries, including the UK. Institutions here took a leading role in building the Mid-InfraRed Instrument (MIRI), which will operate as an imager and spectrometer, a device that separates light into its constituent wavelengths, akin to the different colours in a rainbow. That dispersed light is a vital tool for astronomers. It gives them the chemical composition, temperature, speed and magnetic field strength of the objects they observe and is a key part of how we understand the wider universe.

JWST is now travelling to its final destination, the L2 point 1.5 million kilometres away. At L2 the gravitational pull from the Earth and from the Sun act to keep objects in place relative to both, so JWST will always face away from our planet and our star, giving it a continuous view of the sky away from both bodies.

On arrival at L2 the Telescope will be commanded to unfurl its sunshield, keeping it cool to better allow infrared light to be detected, and 18 segments will slowly unfold into place to create a main mirror 6.5 metres across. Once the commissioning process is complete, the first images are expected to be sent back in mid-2022.

Professor Emma Bunce, President of the Royal Astronomical Society, is delighted by the successful launch. She said: “Astronomers all over the world have been looking forward to JWST for many years. This telescope offers a new eye on the cosmos that will provide stunning new images of the Universe from farther back in time than anything before it. It will truly take our science to the next level, and I cannot wait to see the results.”