Hidden treasures can be found in the archive of the Geophysical Supplement to the Monthly Notices of the Royal Astronomical Society (1922-1957) including, for example, detailed observations of a meteor which descended over Yorkshire in 1926.

In the October 1928 issue, F. J. W. Whipple contributed an article entitled “The Detonating Meteor of 1926 September 6. An Instance of an Outer Zone of Audibility.” In a highly readable account, Whipple explains how he had collected first-hand observations of the meteor’s passage with the intention of deriving the velocity of sound in the upper atmosphere. While he was unable to do this with sufficient precision, he did obtain information with regard to the places where the passage of the meteor could be both seen and heard, as well as those where it could be seen but not heard: the “Outer Zone of Audibility” in the paper’s title. These were collated in a map (copied here), which also showed the location where tremors had been felt (Woodstock). There are also quotes from observers which provide fascinating insights into the events of the day, including estimates of the height of the meteor about the ground at specific locations. 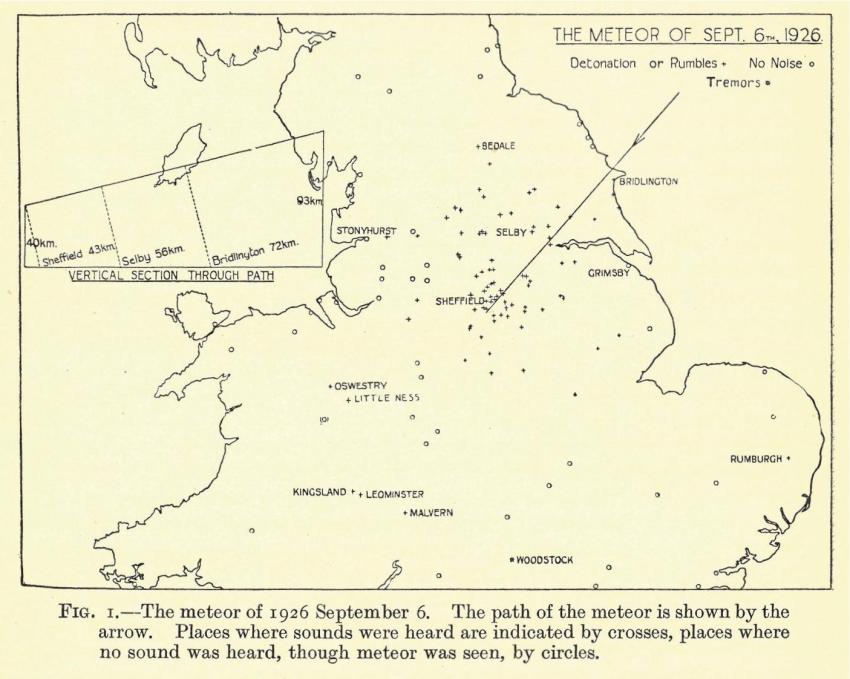 After a detailed section analysing the observations, Whipple describes his principal result: “the occurrence of an outer zone of audibility of a detonating meteor provides additional evidence for the existence of high temperatures in a certain region of the upper atmosphere”. He adds that “the sound produced in the first part of the visible course may not be powerful enough to reach the ear of an observer on the ground”.

Commenting for us on Whipple’s findings, Dr Catherine Degroot-Hedlin, an expert on atmospherics and infrasound at UCSD, says: “The conclusions are well-reasoned in light of what we know now - there are direct arrivals (normal audibility in Figure 3) and what we now know as stratospheric returns (abnormal audibility) separated by a zone of silence.  This is interpreted as resulting from a zone of higher temperature in the upper atmosphere.  We now understand that stratospheric returns are indeed partly due to higher stratospheric temperatures, but largely due to stratospheric winds.  He appears to have some hint of this as he wrote ‘The fact that the actual zone was not equidistant from the end-point of the meteor's track in different directions must be ascribed to wind in the upper regions.’ I find it surprising that stratospheric arrivals from a meteor could produce sound at audible frequencies; the large size of this event must have made this possible.”

A note at the top of the original article indicates that it was “Communicated by W. M. H. Greaves”. This was because at that time, papers by non-members of the RAS had to be communicated by members; fortunately, that restriction no longer applies to RAS journals. Whipple (1876-1943) was a well known meteorologist. Among his contributions to scientific literature from 1906 onwards is a major paper on air waves and ground waves from the 1908 Tunguska event (published in 1930 in the Royal Meteorological Society Quarterly Journal).

Visit the archive at https://academic.oup.com/gsmnras/issue to discover more hidden treasures, from the first article published, “On the Arrival of Earthquake Waves at the Antipodes, and on the Measurement of the Focal Depth of an Earthquake”, by H. H. Turner, published in March 1922, to the last in the collection, “Earth Models with Chemically Homogeneous Cores” by B. A. Bolt, published in November 1957.

More information on the history of the Geophysical Journal International can be found at https://academic.oup.com/gsmnras/pages/About