Gaia: most accurate data ever for nearly two billion stars 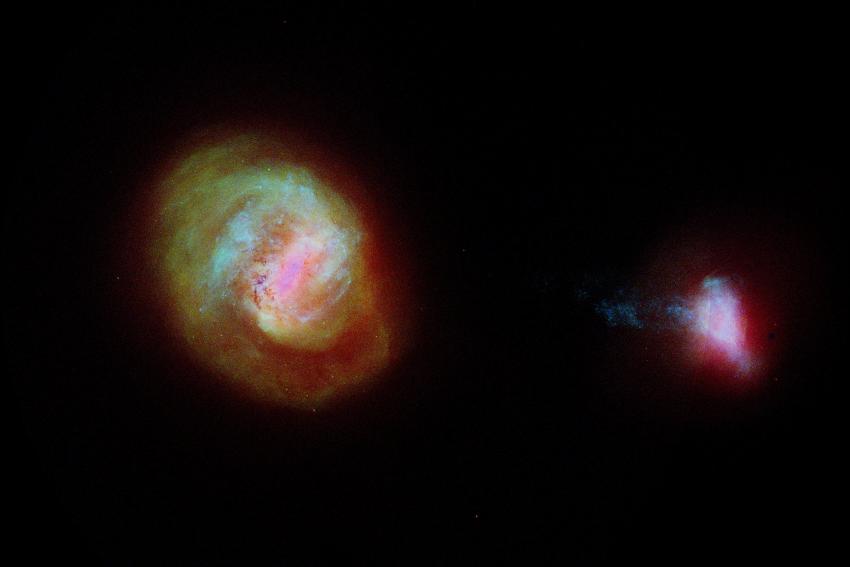 A diagram of the two most important companion galaxies to the Milky Way, the Large Magellanic Cloud or LMC (left) and the Small Magellanic Cloud (SMC) made using data from the European Space Agency Gaia satellite. The two galaxies are connected by a 75,000 light-years long bridge of stars, some of which is seen extending from the left of the SMC.
Credit
ESA/Gaia/DPAC
Licence type
Attribution (CC BY 4.0)

Today (3 December), an international team of astronomers announced the most detailed ever catalogue of the stars in a huge swathe of our Milky Way galaxy. The measurements of stellar positions, movement, brightness and colours are in the third early data release from the European Space Agency’s Gaia space observatory, now publicly available. Initial findings include the first optical measurement of the acceleration of the Solar system. The data set, and early scientific discoveries, were presented at a special briefing hosted by the Royal Astronomical Society.

Launched in 2013, Gaia operates in an orbit around the so-called Lagrange 2 (L2) point, located 1.5 million kilometres behind the Earth in the direction away from the Sun. At L2 the gravitational forces between the Earth and Sun are balanced, so the spacecraft stays in stable position, allowing long-term essentially unobstructed views of the sky.

The primary objective of Gaia is to measure stellar distances using the parallax method. In this case astronomers use the observatory to continuously scan the sky, measuring the apparent change in the positions of stars over time, resulting from the Earth’s movement around the Sun.

Knowing that tiny shift in the positions of stars allows their distances to be calculated. On Earth this is made more difficult by the blurring of the Earth’s atmosphere, but in space the measurements are only limited by the optics of the telescope.

Two previous releases included the positions of 1.6 billion stars. Today’s release brings the total to just under 2 billion stars, whose positions are significantly more accurate than in the earlier data. Gaia also tracks the changing brightness and the positions of the stars over time across the line of sight (their so-called proper motion), and by splitting their light into spectra, measures how fast they are moving towards or away from the Sun and assesses their chemical composition.

The new data include exceptionally accurate measurements of the 300,000 stars within the closest 326 light years to the Sun. The researchers use these data to predict how the star background will change in the next 1.6 million years. They also confirm that the Solar system is accelerating in its orbit around the Galaxy.

This acceleration is gentle, and is what would be expected from a system in a circular orbit. Over a year the Sun accelerates towards the centre of the Galaxy by 7 mm per second, compared with its speed along its orbit of about 230 kilometres a second.

Gaia data additionally deconstruct the two largest companion galaxies to the Milky Way, the Small and Large Magellanic Clouds, allowing researchers to see their different stellar populations. A dramatic visualisation shows these subsets, and the bridge of stars between the two systems.

Dr Floor van Leeuwen of the Institute of Astronomy at the University of Cambridge, and UK Gaia DPAC Project Manager, comments: “Gaia is measuring the distances of hundreds of millions of objects that are many thousands of light years away, at an accuracy equivalent to measuring the thickness of hair at a distance of more than 2000 kilometres. These data are one of the backbones of astrophysics, allowing us to forensically analyse our stellar neighbourhood, and tackle crucial questions about the origin and future of our Galaxy.”

Gaia will continue gathering data until at least 2022, with a possible mission extension until 2025. The final data releases are expected to yield stellar positions 1.9 times as accurate as those released so far, and proper motions more than 7 times more accurate, in a catalogue of more than 2 billion objects.

Since 2013 the European Space Agency Gaia satellite has been measuring the positions and characteristics of nearly two billion stars in our Milky Way galaxy. This movie is a flythrough of the nearest 326 light years to the Sun, a region of space that contains around 300,000 stars.

The Large and Small Magellanic Clouds

Data from the European Space Agency Gaia space observatory help us understand the different stellar populations in the two main companion galaxies to the Milky Way, the Large and Small Magellanic Clouds. This animation moves from an image of the Milky Way to the two systems, shows the separate populations of stars in each one. It then illustrates the dramatic bridge of stars connecting the LMC and SMC, spanning 75,000 light years.

The Gaia Early Data Release 3 will be freely available to the scientific community and the wider public after 1100 GMT on Thursday 3 December.

Institutes in the UK have played a pivotal role in a wide range of aspects of the new Gaia data release. At the Royal Observatory Edinburgh, supported by Leicester University, software for the pre-processing of the data was prepared and tested; at the Institute of Astronomy (IoA) in Cambridge the photometric data was processed and prepared for publication, and at the Mullard Space Science Laboratory work is continuing on the software for the processing of the spectroscopic data produced by the mission. The UK activities in the Gaia project are supported by grants from the UK Space Agency and the Science and Technology Facilities Council.

The UK Space Agency leads the UK’s efforts to explore and benefit from space, with responsibility for all strategic decisions on the UK civil space programme. It ensures Government investments in space science and technology deliver significant value to the UK economy and people’s lives. As set out in the Industrial Strategy, the UK Space Agency works with industry to develop new technologies, infrastructure and services, and to ensure the UK thrives in the commercial space age.

STFC funds and supports research in particle and nuclear physics, astronomy, gravitational research and astrophysics, and space science and also operates a network of five national laboratories, including the Rutherford Appleton Laboratory and the Daresbury Laboratory, as well as supporting UK research at a number of international research facilities including CERN, FERMILAB, the ESO telescopes in Chile and many more. Follow STFC on Twitter