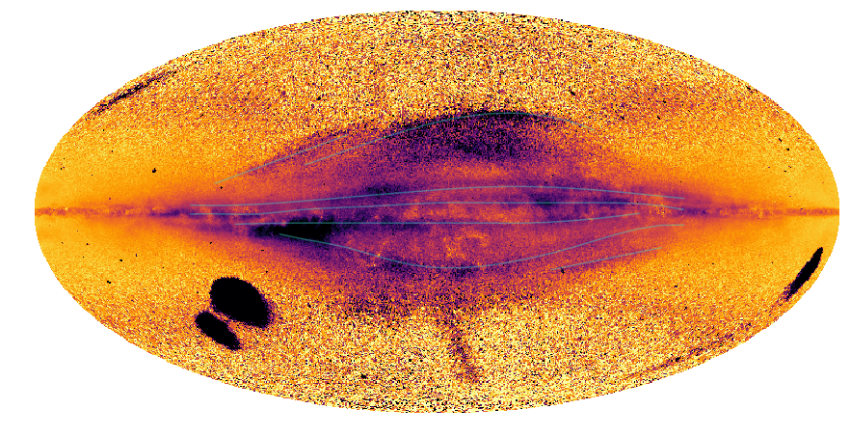 All-sky map of the Milky Way in motion using the Gaia data. Areas with significant motion are shown in black/purple and those with relatively low motion in yellow. A number of large scale filamentary disc structures are evident about the midplane. The map also shows the Magellanic Clouds and their connecting stellar bridge to left, while the Sgr dwarf galaxy currently being torn apart can be seen on the right (main body).
Credit
Laporte et al.
Licence type
Attribution (CC BY 4.0)

An international team of astronomers, led by researcher Chervin Laporte of the Institute of Cosmos Sciences of the University of Barcelona (ICCUB-IEEC), has used data from the Gaia space mission to create a new map of the Milky Way’s outer disc. Intriguingly, newly found structures include evidence for fossil spiral arms. The team published the new work in a paper in Monthly Notices of the Royal Astronomical Society: Letters.

The team analysed the Gaia motion data, available from December 2020, to identify coherent structures. Their resulting map revealed the existence of many previously unknown spinning filamentary structures at the edge of the disc. It also gave a sharper overall view of previously known structures. Numerical simulations predict such filamentary structures to form in the outer disc from past satellite interactions, but the sheer quantity of substructure revealed by this map was not expected and remains a mystery.

What could these structures possibly be? One possibility is that they are the remains of tidal arms from the Milky Way disc which were excited at different times by various satellite galaxies. Our Galaxy is now surrounded by 50 of these satellites and has engulfed numerous other galaxies in its past. At present, the Milky Way is thought to be being perturbed by the Sagittarius dwarf galaxy, But in its more distant past it interacted with another intruder, the Gaia Sausage, which has now dispersed its debris into the outskirts of our galaxy.

In an earlier study, the same team showed that one of the filamentary structures in the outer disc, the Anticenter Stream, had stars which were predominantly more than 8 billion years old. This makes it potentially too old to have been excited by Sagittarius alone and instead points to the Gaia Sausage.

Another possibility is that not all these structures are actual genuine fossil spiral arms but instead form the crests of large scale vertical distortions in the Milky Way disc. “We believe that discs respond to satellite impacts which set up vertical waves that propagate like ripples on a pond" says Laporte.

To try to distinguish between the two explanations, the team has now secured a dedicated follow-up programme with the William Herschel Telescope on the Canary Islands in order to study the properties of the stellar populations in each substructure. Future surveys will help shed light on the nature and origin of these heavenly wispy structures.

Laporte comments on their findings: “Typically this region of the Milky Way has remained poorly explored due to the intervening dust which severely obscures most of the Galactic midplane”. He adds, “While dust affects the luminosity of a star, its motion remains unaffected. We were certainly very excited to see that the Gaia motions data helped us uncover these filamentary structures! Now the challenge remains to figure what these things exactly are, how they came to be, why in such large numbers, and what they can tell us about the Milky Way, its formation and evolution."

A copy of the letter is available from https://academic.oup.com/mnrasl/advance-article-abstract/doi/10.1093/mnrasl/slab109/6400111?redirectedFrom=fulltext