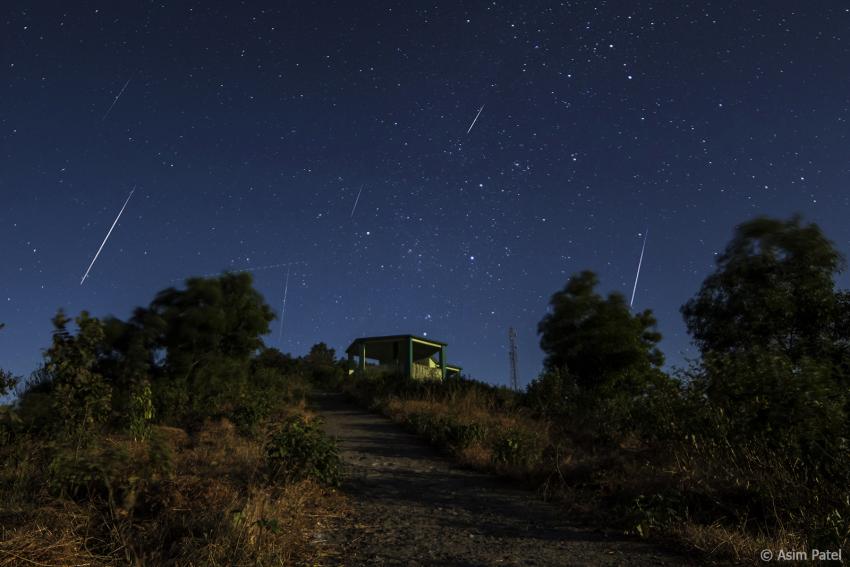 An image of Geminid meteors in December 2013. The meteors are the bright streaks, set against a background of stars.
Credit
Asim Patel
Licence type
Attribution (CC BY 4.0)

Stargazers across the northern hemisphere could see as many as 70 meteors an hour this coming Sunday (13-14 December), as the Geminids meteor shower reaches its peak. Prospects for what should be this year’s best display of meteors are particularly good, as there will be no Moon in the sky to interfere with the view.

Meteors are small pieces of interplanetary debris burning up in the Earth’s atmosphere. They come in at high speeds, in the case of the Geminids typically at 130,000 kilometres an hour. Friction with the upper atmosphere quickly heats up the incoming debris, the air around them glows brightly, and the particles are rapidly destroyed. The resulting streak of light is what we see from the ground as a meteor, or ‘shooting star’.

Outside of meteor showers, there are perhaps six random meteors (sporadics) visible each hour from a given location on any night. But throughout the year the Earth’s orbit intersects material left behind by comets, or in the case of the Geminids, the asteroid Phaethon. When we encounter these thicker streams of debris there is a surge in meteor numbers – a shower. 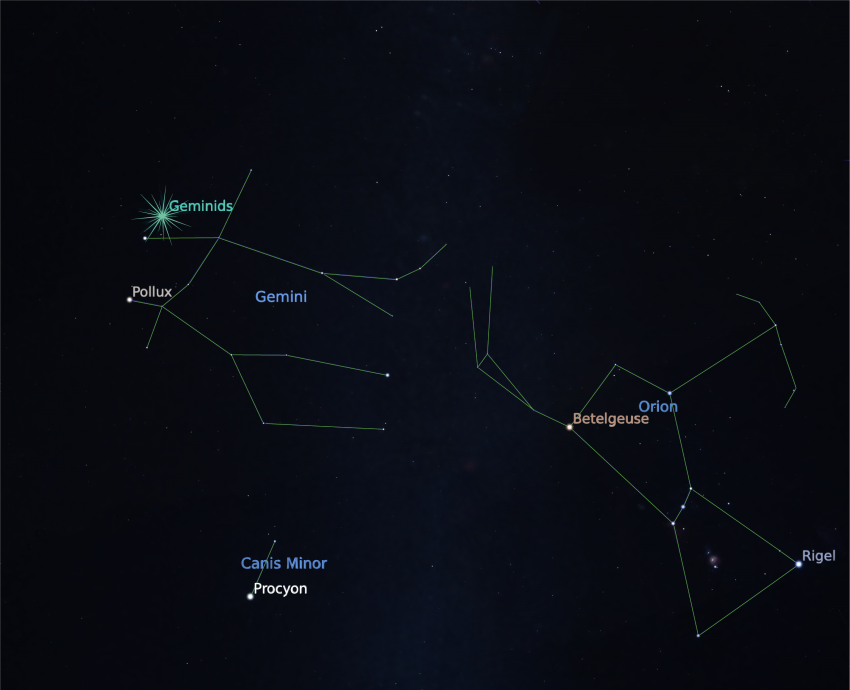 Diagram showing the position of the Geminid meteor shower radiant at 2230 GMT on 13 December, as seen looking south in southern England. Meteors appear to emanate from this point, located in the constellation of Gemini, above and to the left of the bright constellation of Orion. (Diagram based on chart created in Stellarium.)
RAS / Lucinda Offer
Licence type
Attribution (CC BY 4.0)

Meteors in the upcoming shower can appear anywhere in the sky, but their trails appear to originate from a single point (known as the radiant) in the constellation of Gemini, hence the name Geminids. These meteors appear to be fairly slow moving, and can be intensely coloured.

To see the shower, observers should look upwards after 22:00 GMT, when the radiant will be high in the southeastern sky. Covid restrictions permitting, the best views are always away from city lights, but with a clear sky even urban skywatchers should see at least a few meteors.

The shower will be visible all over the UK, as long as the skies are clear. Meteor showers are easy to observe and need no special equipment, though December nights demand warm clothing, and a reclining chair and blankets make viewing more comfortable. If clouds do make viewing impossible this weekend, the showers will continue for a few days more with reduced activity.