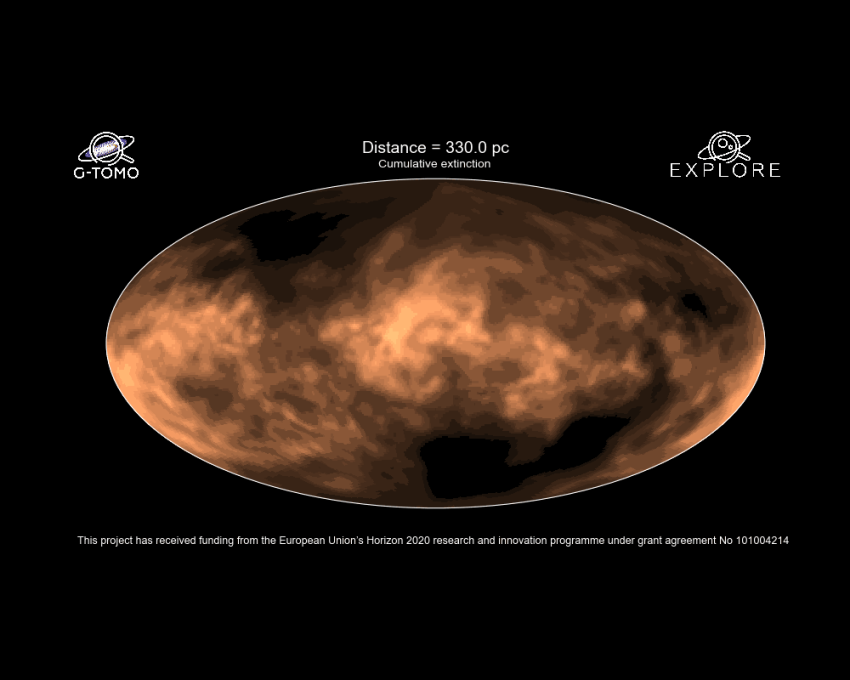 A still from the new animation showing the cumulative build-up of dust looking from Earth’s local neighbourhood to around 13,000 lightyears towards the centre of the Milky Way.
Credit
EXPLORE/ACRI-ST/GEPI
Licence type
Attribution-NonCommercial-ShareAlike (CC BY-NC-SA 4.0)

An animated dive into the dusty Milky Way reveals the outlines of our galaxy taking shape as we look out further and further from Earth.

Based on new data from an interactive tool that exploits data from the European Space Agency’s Gaia mission and other space science data sets, astronomers have created an animation to model dust in the Milky Way. The work was presented this week at the National Astronomy Meeting (NAM 2022) at the University of Warwick.

The animation shows the cumulative build-up of dust looking from Earth’s local neighbourhood to ~13000 lightyears towards the galactic centre – around 10% of the overall distance across the Milky Way. Close by, dust swirls all around but, further out, the concentration of dust along the galactic plane becomes clear. Two ‘windows’, one above and one below the galactic plane, are also revealed.

“Dust clouds are related to the formation and death of stars, so their distribution tells a story of how structures formed in the galaxy and how the galaxy evolves,” said Nick Cox, coordinator of the EXPLORE project which is developing the tools. “The maps are also important for cosmologists in revealing regions where there is no dust and we can have a clear, unobstructed view out of the Milky Way to study the Universe beyond, such as to make Deep Field observations with Hubble or the new James Webb Space Telescope.”

The tools used to create the animation combine data from the Gaia mission and the 2MASS All Sky Survey. The tools are part of a suite of applications designed to support studies of stars and galaxies, as well as lunar exploration, and have been developed through funding from the European Union’s Horizon 2020 Programme.

“State-of-the-art machine learning and visual analytics have the power to greatly enhance scientific return and discovery for space science missions, but their use is still relatively novel in the field of astronomy,” said Albert Zijlstra, of the University of Manchester and the EXPLORE project.  “With a constant stream of new data, such as the recent third release of Gaia data in June 2022, we have an increasing wealth of information to mine – beyond the scope of what humans could process in a lifetime. We need tools like the ones we are developing for EXPLORE to support scientific discovery, such as by helping us to characterise properties within the data, or to pick out the most interesting or unusual features and structures.”

Caption: Animation showing the cumulative build-up of dust looking from Earth’s local neighbourhood to around 13,000 lightyears towards the centre of the Milky Way. Credit: EXPLORE/ACRI-ST/GEPI

The six scientific data applications developed by EXPLORE are:

EXPLORE is a consortium of eight beneficiaries:

Dissemination for EXPLORE is supported by the Europlanet Media Centre: https://www.europlanet-society.org/media-centre/