Comet SWAN at its best 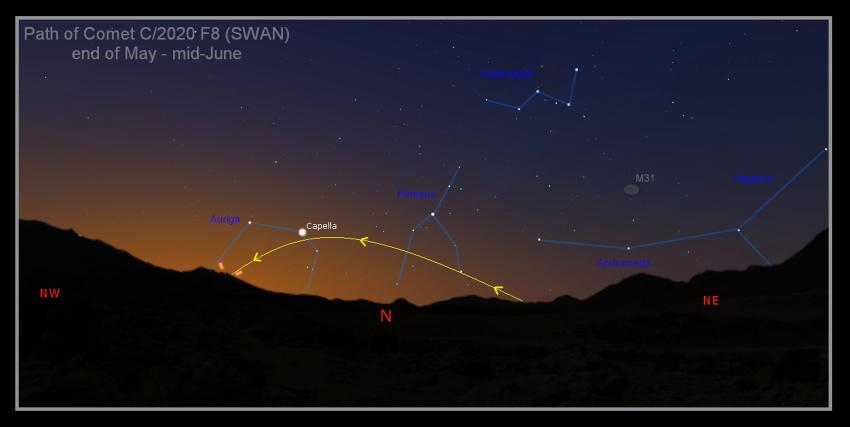 A finder chart of comet SWAN in as it moves across the evening sky after sunset from May to mid-June 2020.
Credit
Stuart Atkinson
Licence type
All Rights Reserved

Comet C/2020 F8 (SWAN), perhaps the brightest comet we will see this year, is at its best from now until mid-June. It should be visible in from the UK in the north-western sky after sunset, close to the horizon.

Along with the Sun, planets, and asteroids, comets make up the Solar System, the nearest part of the cosmos. Comets are objects made up of rock and ices – and can be anything from the size of mountains to as big as the Isle of Wight.

For most of their orbits, comets are far away from the Sun, travelling through the cold of space, and they are dormant. When they come closer, things change: they heat up, the ices start to turn into gas, and jets of gas and dust stream out from the comet’s surface.

A short video guide to seeing comet SWAN from the UK and mid-northern latitudes.

Radiation pressure from sunlight and the Solar wind then sweep the gas and dust into long tails that can stretch for tens of millions of kilometres. These tails can be extraordinarily beautiful, and feature in many of the best drawings and photographs in astronomy.

SWAN was discovered in late March in images from the Solar and Heliospheric Observatory (SOHO) satellite. It’s fairly bright, but fading, and the best chance of seeing it in the UK is in the last week of May through to early June. With the help of a pair of binoculars the comet should be visible in the north-western sky after sunset, fairly close to the horizon.

Lucky viewers may even be able to see it with the naked eye alone – some astronomers in the southern hemisphere have done this already – but the bright twilight sky and the low altitude of SWAN won’t make this easy. 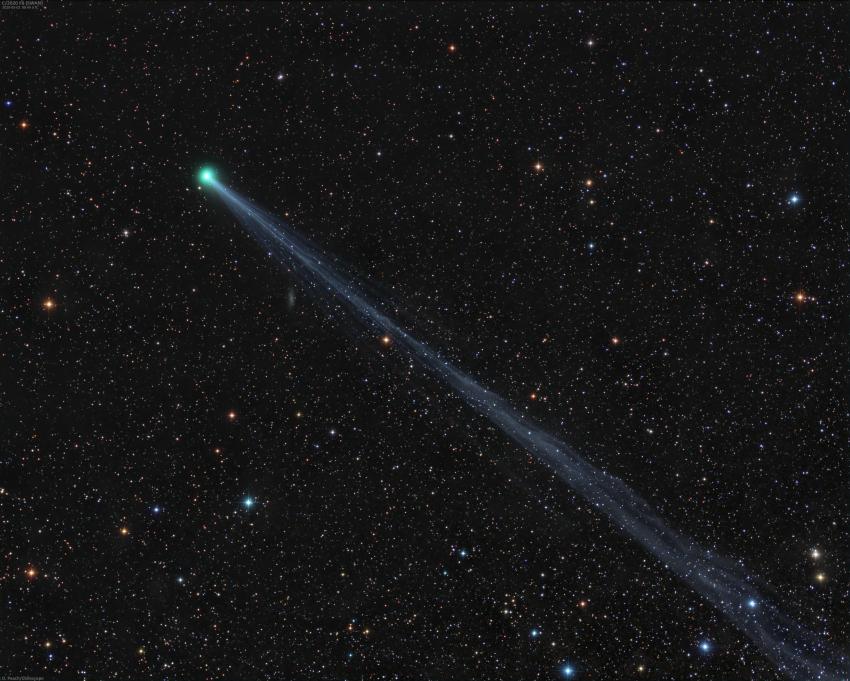 Image of Comet C/2020 F8 (SWAN) obtained by UK astrophotographer Damian Peach on 2 May 2020. The long greenish tail emanates from the head of the comet at the top left of the image.
D. Peach / Chilescope team
Licence type
All Rights Reserved

Budding astrophotographers should look for a haze of light marking the head of the comet - the cloud of gas and dust erupting from its surface. If you take any photos let us know; tweet us @royalastrosoc or email the #RASsupermassive team and we’ll share your pictures.

Links
Listen to the latest edition of the RAS Supermassive podcast
Submitted by Robert Massey on Tue, 19/05/2020 - 15:04