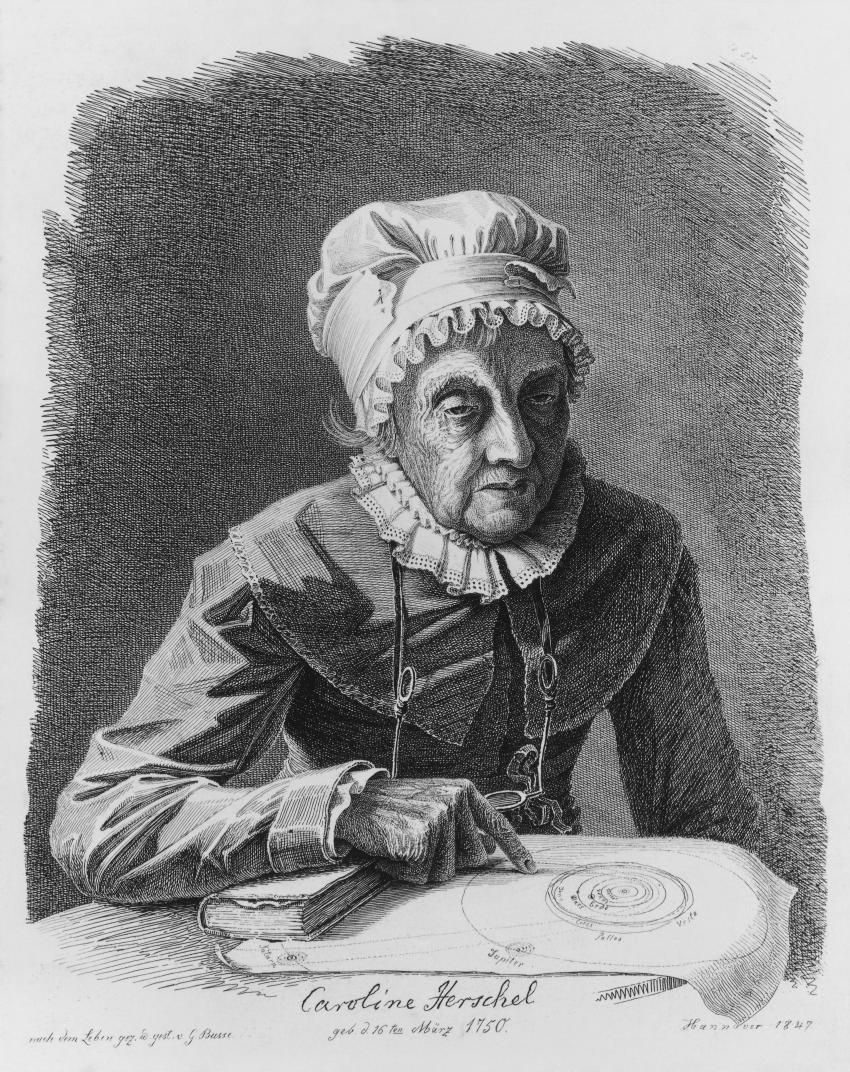 A portrait of Caroline Herschel with an illustration of planets in the solar system.
Credit
RAS / SPL
Licence type
All Rights Reserved

A new prize will celebrate outstanding research by women astrophysicists in the UK and Germany. The Caroline Herschel Medal, announced today by the UK government to mark the visit of German Chancellor Angela Merkel, celebrates the longstanding scientific cooperation between the two countries. Administered by the Royal Astronomical Society (RAS) in collaboration with the German Astronomical Society (Astronomische Gesellschaft, AG), the medal will be given in alternate years to researchers based in the UK and Germany, with an accompanying prize fund of £10,000.

From its foundation in 1820, the RAS included astronomers from Germany, including Caroline Herschel and her brother William, who both moved to Bath in the second half of the eighteenth century. Caroline was the first woman in Britain to receive a royal pension for astronomy, and in 1828 became the first woman to win the RAS Gold Medal, awarded in recognition of her discovery of eight comets and her work refining and updating star catalogues.

In 1915 Albert Einstein published his General Theory of Relativity in Berlin, and despite World War One, UK astronomers learned of his paper. In 1919, six months after the conflict ended, the Royal Astronomical Society co-sponsored expeditions to observe a total solar eclipse from Principe and Sobral and confirmed Einstein's theory, a discovery that changed science forever.

Today scientific collaboration between the two nations remains strong. Germany is the top UK partner for projects funded within the EU Framework Programme Horizon 2020, with more than 4000 signed grants. The projects have been awarded a total of €25.1bn, with €3.6bn of the EU contribution to the projects allocated to the UK. Between April 2012 and March 2020, the UK Research Councils and Innovate UK funded 1194 projects involving collaboration between UK and German researchers, with a total value of £1.07bn.

The Caroline Herschel Medal will be judged by an independent panel of experts drawn from the UK and Germany, convened by the RAS and the Astronomische Gesellschaft, and is supported by the Department of Business, Energy and Industrial Strategy's Global Partnership Fund. The prize money can be used for research or associated costs such as childcare, and will be awarded to one woman each year, alternating between the UK and Germany.

In Germany, women earn 30% of doctoral degrees in astrophysics, but are significantly more under-represented in leadership positions: about 18% of all professorships in astronomy and astrophysics are held by women. The quota of women among the German members of the International Astronomical Union is 18%, and thus below the global average of 21%.

There is an existing Caroline Herschel prize lectureship founded in 2018 by what is now the Herschel Society in association with the RAS for promising women astronomers early in their careers. There is also the RAS Herschel Medal, named after Caroline’s brother William. The new women-only prize complements them both.

The University of Bath is hosting the RAS National Astronomy Meeting (NAM 2021) from 19-23 July, which will celebrate the 200th anniversary of the foundation of the RAS. Dame Jocelyn Bell Burnell will give a plenary lecture at the conference, where she plans to outline Caroline Herschel’s career.

“We are delighted to support this exciting new initiative recognising outstanding contributions to astrophysics by women based here in the UK and in Germany and the longstanding cooperation between our two nations. Caroline Herschel has a profound connection to our Society and had a significant impact on astronomy, and as such it is fitting that a new medal and prize should be named in her honour.”

"The German Astronomical Society welcomes this prize as it underlines the strong UK-German collaboration in astrophysics. Caroline Herschel lived her passion for astronomy on both sides and is an important historical role model for all of us.”

“The UK boasts deep scientific ties with Germany, and this has been reflected over the past year and half with both nations working hand in hand to defeat COVID-19.

‘Backed by the UK Government, the Caroline Herschel Medal will support trailblazing scientists in both nations to take their astronomy research to the next level, increasing our knowledge of the universe and encouraging women to pursue diverse and rewarding careers in science.”

“Caroline Herschel is an outstanding choice, highly recognisable, inspiring for women and exemplifying the strong, long-standing UK-German research links. It is rather wonderful that this Medal is being launched in honour of Chancellor Merkel, and in celebration of the UK-German science connections (not least of all astrophysics, into which Germany invests a lot) then and now”.

“Caroline Herschel was physically a tiny woman, but with a big effect in the world of astronomy as it then was.”

“A wonderful initiative to further honour one of the founders of modern astronomy as well as celebrate links between Caroline Herschel’s home country of Germany and her adopted country of the United Kingdom”.

The German Astronomical Society (Astronomische Gesellschaft, or AG for short), founded in 1863, is the German national professional association for astronomy and astrophysics. The AG promotes activities in science and research, strengthens exchange between its members and supports the dissemination of science to the public and in education. On the international level, the AG represents the German astronomical scientific community in the European Astronomical Society (EAS) and the International Astronomical Union (IAU). The Council of German Observatories is a central body of the AG, acting as the science policy committee, and representing the common interests of all German astronomical institutions vis-à-vis funding agencies, governments, international organisations and other relevant boards and committees.