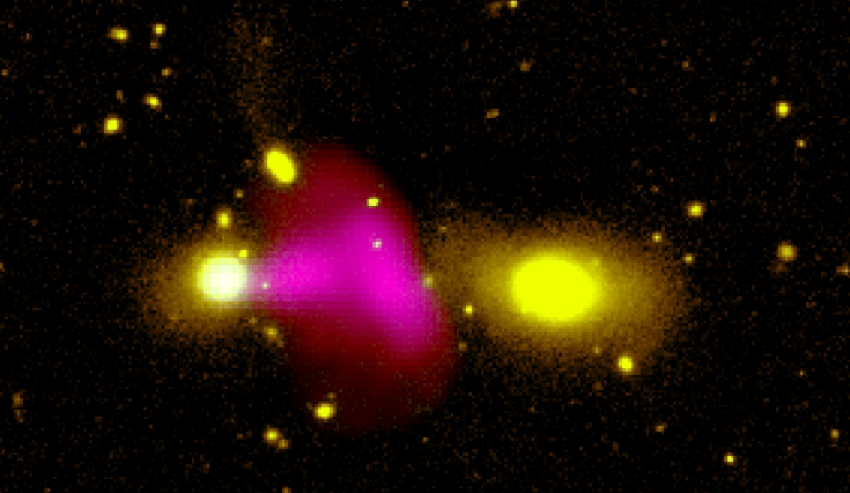 With the help of citizen scientists, a team of astronomers has discovered a unique black hole spewing a fiery jet at another galaxy. The black hole is hosted by a galaxy around one billion light years away from Earth named RAD12. The work was published today in Monthly Notices of the Royal Astronomical Society (Letters).

Galaxies are typically divided into two major classes based on their morphology: spirals and ellipticals. Spirals have optically-blue looking spiral arms with an abundance of cold gas and dust. In spiral galaxies, new stars form at an average rate of one Sun-like star per year. In contrast elliptical galaxies appear yellowish and lack distinct features such as spiral arms.

Star formation in elliptical galaxies is very scarce; it is still a mystery to astronomers as to why the elliptical galaxies we see today have not been forming new stars for billions of years. Evidence suggests that supermassive or ‘monster’ black holes are responsible. These ‘monster’ black holes spew gigantic jets made of electrons moving at very high speeds at other galaxies, depleting the fuel required for future star formation: cold gas and dust.

The unique nature of RAD12 had been observed in 2013 using optical data from the Sloan Digitised Sky Survey (SDSS) and radio data from the Very Large Array (FIRST survey). However, follow-up observation with the Giant Meterwave Radio Telescope (GMRT) in India was required to confirm its truly exotic nature: The black hole in RAD12 appears to be ejecting the jet only towards a neighbouring galaxy, named RAD12-B. In all cases, jets are ejected in pairs, moving in opposite directions at relativistic speeds. Why only one jet is seen coming from RAD12 remains a puzzle to astronomers.

A conical stem of young plasma is seen being ejected from the centre and reaches far beyond the visible stars of RAD12. The GMRT observations revealed that the fainter and older plasma extends far beyond the central conical stem and flares out like the cap of a mushroom (seen in red in the tricolour image). The whole structure is 440 thousand light years long, which is much larger than the host galaxy itself.

RAD12 is unlike anything known so far; this is the first time a jet has been observed to collide with a large galaxy like RAD12-B. Astronomers are now one step closer to understanding the impact of such interactions on elliptical galaxies, which may leave them with little cold gas for future star formation.

Research lead Dr Ananda Hota says, "We are excited to have spotted a rare system that helps us understand radio jet feedback of supermassive black holes on star formation of galaxies during mergers.  Observations with the GMRT and data from various other telescopes such as the MeerKAT radio telescope strongly suggest that the radio jet in RAD12 is colliding with the companion galaxy. An equally important aspect of this research is the demonstration of public participation in making discoveries through the RAD@home Citizen Science research collaboratory."

The RAD@home Collaboratory welcomes collaboration with other astronomers for future investigation in multiple wavelength campaigns with multiple telescopes. The Collaboratory invites not only professional astronomers but also interested citizens with university-level science degrees to participate in this citizen Science research program. RAD12 Discovery is a beautiful example of how the public (particularly University science students) can directly participate in real astronomy discovery sitting at home.