Black hole at centre of Milky Way unpredictable and chaotic 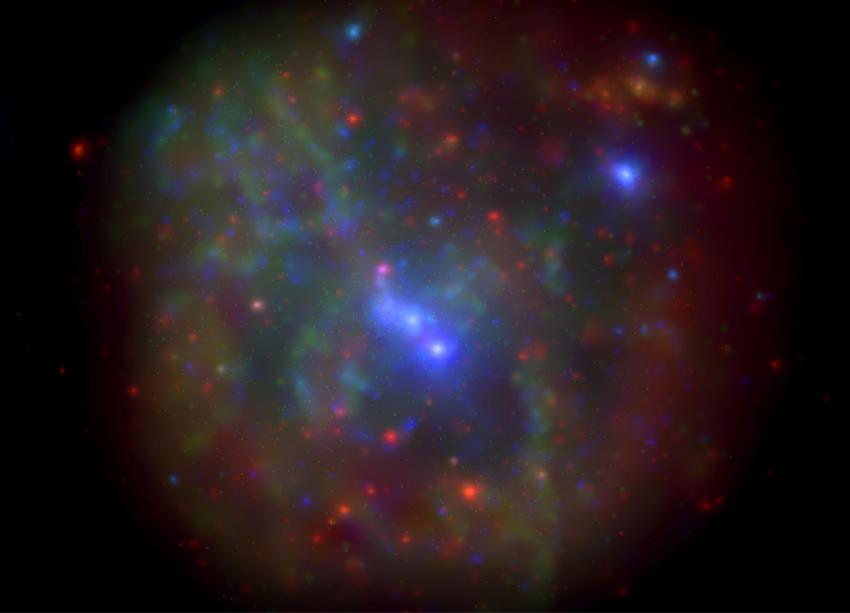 An international team of researchers, led by postgraduate student Alexis Andrés, has found that the black hole at the centre of our galaxy, Sagittarius A*, not only flares irregularly from day to day but also in the long term. The team analysed 15 years’ worth of data to come to this conclusion. The research was initiated by Andres in 2019 when he was a summer student at the University of Amsterdam. In the years that followed, he continued his research, which is now to be published in Monthly Notices of the Royal Astronomical Society.

Sagittarius A* is a strong source of radio, X-rays and gamma rays (visible light is blocked by intervening gas and dust). Astronomers have known for decades that Sagittarius A* flashes every day, emitting bursts of radiation that are ten to a hundred times brighter than normal signals observed from the black hole.

To find out more about these mysterious flares, the team of astronomers, led by Andrés, searched for patterns in 15 years of data made available by NASA's Neil Gehrels Swift Observatory, an Earth-orbiting satellite dedicated to the detection of gamma-ray bursts. The Swift Observatory has been observing gamma rays from black hole since 2006. Analysis of the data showed high levels of activity from 2006 to 2008, with a sharp decline in activity for the next four years. After 2012, the frequency of flares increased again - the researchers had a difficult time distinguishing a pattern.

In the next few years, the team of astronomers expect to gather enough data to be able to rule out whether the variations in the flares from Sagittarius A* are due to passing gaseous clouds or stars, or whether something else can explain the irregular activity observed from our galaxy’s central black hole.

"The long dataset of the Swift observatory did not just happen by accident," says co-author and previous supervisor to Andrés, Dr Nathalie Degenaar, also at the University of Amsterdam. Her request for these specific measurements from the Swift satellite was granted while she was a PhD student. "Since then, I've been applying for more observing time regularly. It's a very special observing programme that allows us to conduct a lot of research."

Co-author Dr Jakob van den Eijnden, of the University of Oxford, comments on the team’s findings: "How the flares occur exactly remains unclear. It was previously thought that more flares follow after gaseous clouds or stars pass by the black hole, but there is no evidence for that yet. And we cannot yet confirm the hypothesis that the magnetic properties of the surrounding gas play a role either."

The research was led by Alexis Andrés from El Salvador. He participated in the summer of 2019 as an undergraduate student in the ASPIRE programme run by the Anton Pannekoek Institute of Astronomy at the University of Amsterdam. Andrés then returned to El Salvador and devoted himself to researching Sagittarius A*’s irregular signals for two years. He led the international research team from a distance due to the covid-19 pandemic. Andrés has been studying for a master's degree in astronomy in Mexico City since August 2021.