Beyond the Clouds: Finding Galaxies Behind Galaxies 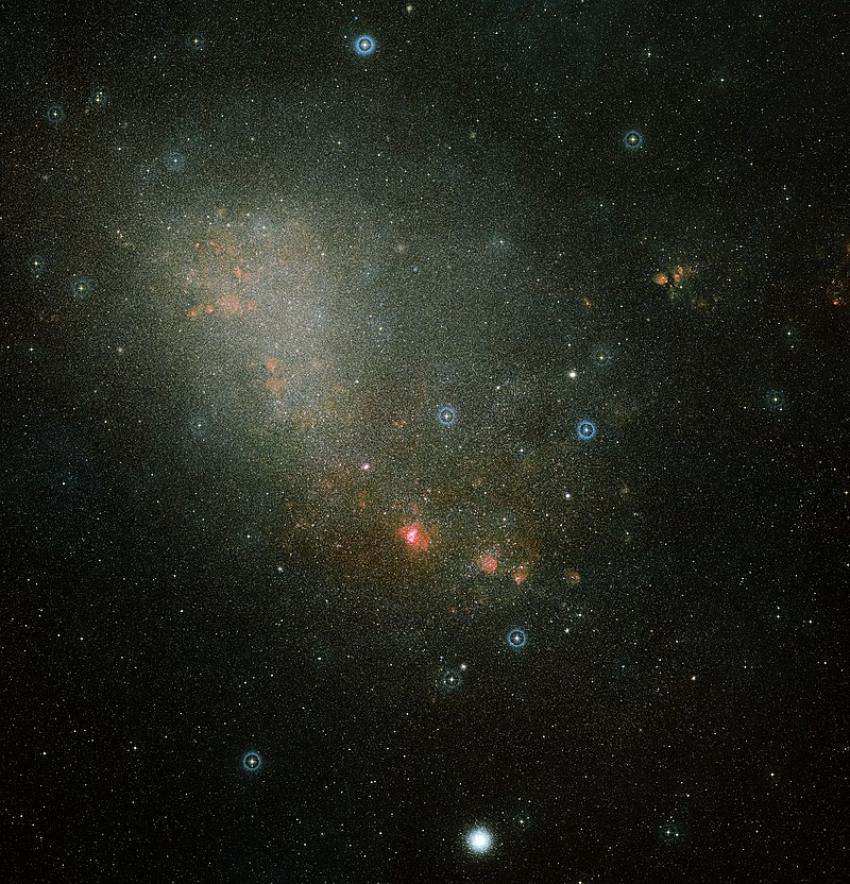 There are hundreds of billions of galaxies in the Universe, each containing billions of stars, and found in every part of the sky. But in some directions, nearby galaxies block the view of the more distant cosmos. Now a team from the University of Keele have created the largest ever map of previously hidden galaxies. Jessica Craig is presenting their work this week at the National Astronomy Meeting at the University of Warwick.

The astronomers looked at the Magellanic Clouds, a pair of galaxies visible from the southern hemisphere that are so close to us that they can be seen with the naked eye. The two galaxies take up a large area of sky, blocking the view of galaxies further away. Because of this, astronomers looking for distant galaxies usually avoid this part of the sky.

Using the VISTA Survey Telescope in Chile, the team photographed the two nearby galaxies in high enough definition to be able to look through the gaps between stars in each one. That way they could see more distant galaxies, which appear fainter and redder than they really are due to the dust that is still in front of them.

The solution is to use a radio telescope, and in this case the Galactic Australian Square Kilometer Array Pathfinder Survey (GASKAP) gives a detailed map of the gas in the Magellanic Clouds, allowing the dust content to be measured, and hence how much the stars are reddened.

A further concern is to distinguish stars from galaxies, and there are so many that this would be impossible by hand. So the Keele team used data from the Gaia observatory to measure the tiny shifts in the positions of stars over time, while the much more distant galaxies stayed in the same place. Galaxies are also redder than the brighter stars, so colour helped remove more stars from the dataset. Colour also indicates how far away galaxies are (through their redshift resulting from the expansion of the Universe).

Machine learning, where software uses artificial intelligence tools, is doing the final sort of the rest of the data. All of this work is leading to the largest ever 3D map of galaxies previously hidden behind the Magellanic Clouds, covering an estimated 1 million galaxies.

Jessica Craig comments: "The Magellanic Clouds are beautiful galactic companions, but they unfortunately do block part of our view of objects further out. Our work is helping overcome that, and in the process helping to fill in the gaps in our map of the universe."

Image 2: https://nam2022.org/images/Screenshot_21_WithCircles.png
A section of the Small Magellanic Cloud in an image made with the VISTA telescope. Some of the more distant galaxies are circled in green. Credit: ESO/VISTA Magellanic Clouds Survey, Acknowledgements: Mike Read and Cambridge Astronomical Survey Unit