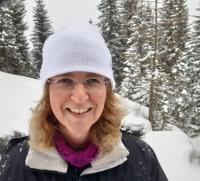 Louise Harra is a solar physicist who studies the trigger of solar flares and coronal mass ejections, and solar wind formation and propagation. She works closely with spacecraft, through operations, design, build and and data analysis. She was project scientist and PI of the Hinode EUV Imaging Spectrometer (EIS) from launch in 2006 until 2019. She is the co-PI of the EUV Imager on the ESA Solar Orbiter mission which was launched in 2020, and the PI of the Solar Spectral Irradiance Monitor on the JAXA Solar-C mission to be launched in 2027. She received her PhD from Queens University, Belfast, and worked at UCL-MSSL for more than 20 years. She moved Switzerland in 2019 to take on the role of director at Physikalisch-Meteorologisches Observatorium Davos/World Radiation Center (PMOD/WRC) and affiliated professor at ETH-Zürich.