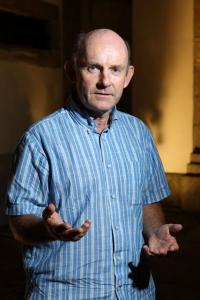 Andrew Cameron is Professor of Astronomy at the University of St Andrews. His research is in stellar magnetic fields and the discovery and characterisation of extrasolar planets.

In his early career, he focused on the rotational history and dynamo-generated magnetic activity of cool stars, ultimately producing micro-arcsecond resolution maps of starspot distributions and surface magnetic fields. With Dr R. D. Robinson he co-discovered the centrifugally supported "slingshot prominence" systems in the coronae of the young, rapidly rotating solar-type star AB Doradus and other similar objects.

Prof. Cameron is currently the UK Co-PI of the Geneva/SUPA/Harvard/INAF/Belfast HARPS-North spectrograph project, and is combining high-precision radial-velocity measurements with stellar activity characterisation to push the limits on planetary mass determination down towards the Earth-mass regime. He is a member of the Science Team for the Swiss-led ESA S-class CHaracterising ExOPlanets Satellite (CHEOPS; launch expected 2019), for which he leads the Working Group on data analysis.