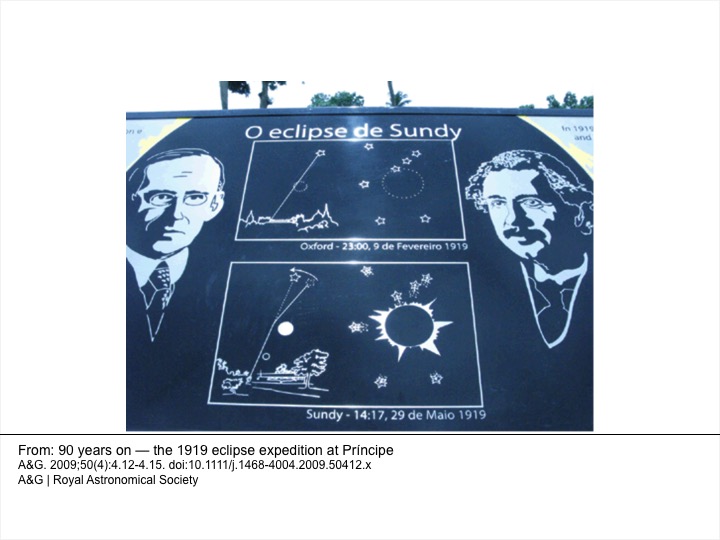 As people across the USA watch a total eclipse of the Sun, think back 98 years to one visible to far fewer people but of great significance to astrophysics 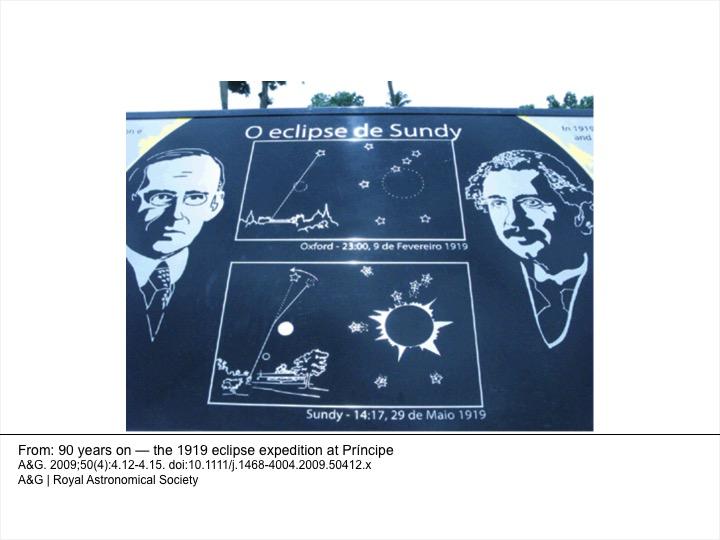 As people across the USA watch a total eclipse of the Sun, think back 98 years to one visible to far fewer people but of great significance to astrophysics

Einstein's General Theory of Relativity was published in 1916, during the First World War; the hostilities meant that few UK astronomers read the oroginal paper, published in German. But Arthur Eddington of Cambridge University did. Eddington realised that Einstein's novel ideas could be tested during a total solar eclipse by looking at starlight that passed very close to the Sun. Comparing their apparent position when the Sun was close to their path to that when the sun was not in that part of the sky woud test the strange bending of light by mass that Einstein proposed in General Relativity. Eddington organised expeditions through the Royal Astronomical Society to Brazil and to the island of Príncipe, off the west coast of Africa. The goal was to observe stars during totality, and compare their positions to those measured when the Sun was not close by in the sky. Eddington himself went to Príncipe, armed with telescope and glass photographic plates for the data. Despite uncertain weather and the threat of clouds, Eddington took his photographs and returned to London, where he announced to a meeting of the RAS that Einstein was right. Newspapers worldwide headlined the triumph of Einstein's strange theory; today General Relativity remains the best description of spacetime and gravity.

Richard Ellis, Pedro G Ferreira Richard Massey and Gisa Weszkalnys described in A&G their visit to Príncipe in 2009, to celebrate 90 years since Eddington's observations, unveiling a plaque to commemorate his visit. Read more about the expedition and the significance of the 1919 observations at A&G Online.