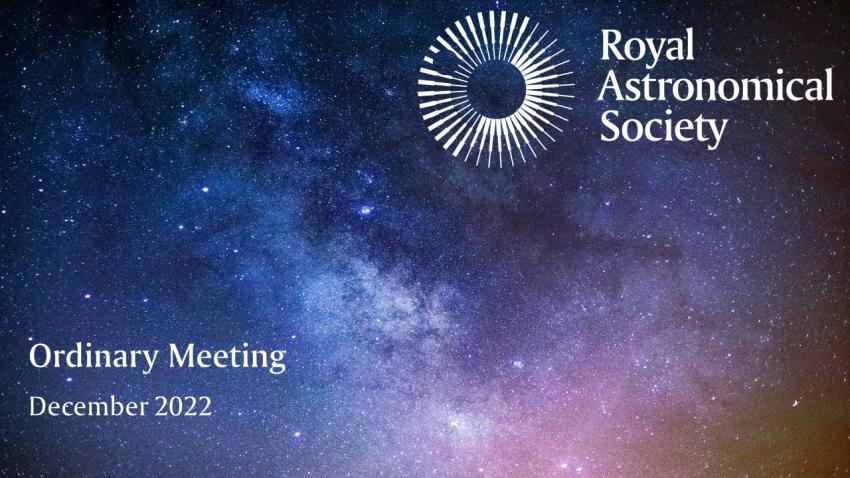 Online and In Person (In Person meeting taking place at Society of Antiquaries, Burlington House)

Isotopic ratios in planetary atmospheres provide important constraints on the planetary evolution. On Mars, a relative enrichment of the heavy isotopes in different species with respect to Earth is thought to be in part due to the result of atmospheric escape, a process which is believed to have played a critical role in driving climate evolution over the last four billion years. However, isotopic ratios not only provide constraints from the long-term perspective, but also are shaped by present-day atmospheric processes.

The ExoMars Trace Gas Orbiter (TGO) has been sounding the atmosphere of Mars for four years, providing unprecedented measurements of its composition and vertical structure. Using observations from the Atmospheric Chemistry Suite (ACS) on the TGO, we have measured the isotopic composition of O, H and C in several species, including H2O, CO2 and CO. These measurements provide important constraints on how the present-day photochemistry and cloud-formation processes fractionate the isotopic ratios in different species, which in turn has strong implications for understanding the long-term evolution of Mars’ climate.

The strong correlations that are found between supermassive black hole (SMBH) mass and velocity dispersion, stellar mass and bulge mass have long been interpreted as co-evolution of galaxies and their SMBHs through galaxy mergers. However, a flurry of new results, both observational and theoretical, have suggested that galaxy mergers may not be the dominant mechanism powering this co-evolution. I shall review these findings and present results showing that merger-free galaxies have SMBHs up to a billion solar masses and have substantial energetic outflows powered by the active galactic nuclei (AGN). In addition I will present work in collaboration with the Horizon-AGN simulation team showing that merger-free evolutionary processes also lead to co-evolution of galaxies and their SMBHs. This has interesting implications: if both galaxy-merger-driven and galaxy-merger-free SMBH growth leads to co-evolution, this suggests that co-evolution is regulated by AGN feedback in both scenarios. AGN feedback is thought to be a key regulator of co-evolution and considered necessary in cosmological volume simulations employing ΛCDM, yet the role of AGN feedback in the absence of mergers is currently unknown. I will therefore discuss the future observations needed to understand the role of this understudied merger-free co-evolution pathway.

Dr Rebecca Smethurst is a Royal Astronomical Society Research Fellow at the University of Oxford. Her work specialises in the growth of supermassive black holes and the impact of AGN feedback that results from that growth. She is part of the SDSS MaNGA and Galaxy Zoo collaborations and was recently awarded the Royal Astronomical Society’s Winton Award for research by a post-doctoral fellow in astronomy whose career has shown the most promising development.

William Herschel is most famous for discovering the planet Uranus, but he also collaborated with his sister Caroline on other astronomical projects. 2022 is their double anniversary: after arriving in England exactly 250 years ago, Caroline Herschel worked with her brother until his death in 1822, when she went back to Germany. Until recently, her contributions have been overlooked because science’s past is traditionally told as a history of momentous achievements by great male geniuses. But then as now, astronomy relies on teamwork.

Caroline played a crucial role in constructing giant telescopes, recording new observational data and compiling influential star catalogues. Celebrated at the time for independently detecting several comets, she was the first woman to receive a royal stipend for her research. This illustrated talk describes the intertwined careers of an enterprising brother-sister couple who studied the heavens together.

Dr Patricia Fara is an Emeritus Fellow of Clare College, where she was Senior Tutor for ten years. She originally read physics at Oxford, but is now in the History and Philosophy of Science department at Cambridge. In addition to her academic teaching, she writes popular books and articles, and was awarded the 2022 Abraham Pais prize by the American Physical Society. Her main speciality is the Enlightenment period, with a particular emphasis on scientific imagery and women in science; her books include A Lab of One’s Own: Science and Suffrage in The First World War as well as Science: A Four Thousand Year History (which has been translated into nine languages), Pandora’s Breeches: Women, Science and Power in the Enlightenment and, most recently, Life after Gravity: Isaac Newton’s London Career.

Online and In Person (In Person meeting taking place at Society of Antiquaries, Burlington House)