A century of lunar science and exploration in the UK: historical perspective on the last 50 years and vision for the next 50 years 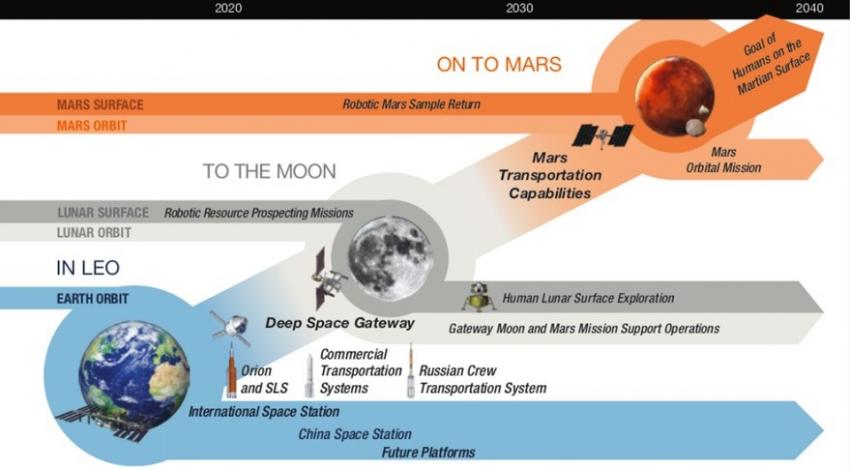 The current version of the Global Exploration Roadmap, released in January 2018, recognising the role of the Moon in Solar System Exploration.
Credit
ISECG
Licence type
All Rights Reserved

The proposed meeting will take place against the backdrop of the 50th anniversaries of the Apollo 11 and Apollo 12 Moon landings. Fifty years on, humanity now stands at the cross-roads of technological advancement and scientific knowledge, ushering in a new era of robotic Space Exploration.

The Moon is rapidly becoming a favourite target for established, as well as emerging, space-faring nations and commercial entities. This renewed interest in lunar exploration is driven partly by national pride and scientific curiosity, but other strategic considerations include increased realisation of the Moon as a technology testbed for exploring more distant bodies, such as Mars and asteroids. Furthermore, the possibility of utilising the lunar material as potential resources for sustaining an extended presence on its surface has heralded an era of 'New Space' by attracting private and commercial bodies towards lunar exploration.

Members of the UK Planetary Science community have significant involvements with various lunar missions (e.g. ESA SMART-1, NASA LRO), and in the analysis of returned samples from the Apollo and Luna missions and that of lunar meteorites.

This meeting will include a historical perspective of lunar science exploration in the UK as well as emerging opportunities for involvement in current/planned lunar missions: including new instrumentation provided to ESA and NASA missions and collaborations with CNSA. Our vision for the next 50 years of lunar exploration includes the Moon being used as an outpost for Solar System exploration, including building of habitats via in-situ resource utilisation (ISRU). In a societal and philosophical context, the role of the Moon in engaging the public with wider Solar System exploration and STEM subjects will also be discussed.

Admission to Specialist Discussion Meetings is free for RAS Fellows, £15 for non-fellows (£5 for students), cash or cheque only, collected at the registration desk.  Admission to the subsequent Open (Monthly A&G) Meeting of the Royal Astronomical Society is open to all, at no charge.